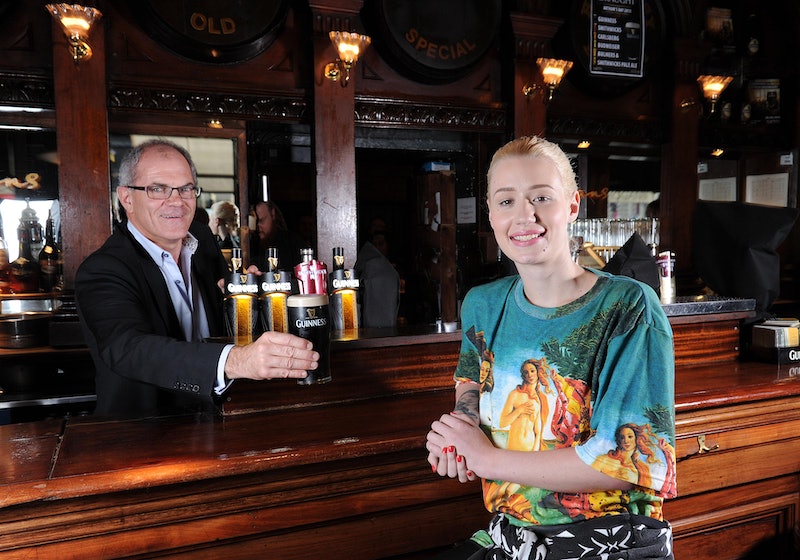 CBS will air the Grammy Awards on Feb. 8 at 8 pm ET and nothing says awards shows like getting drunk. The Grammys are pretty much one big concert (with some awards handed out), so since I always drink during concerts, it makes sense to play a drinking game during the Grammys. Usually I'm bummed out when I overdo my alcoholic intake at concerts — the live performances become hazy and my wallet suffers. But since most of us will be enjoying the Grammys from the comfort of our own homes, you don't have to worry about that! Any performances that aren't crystal clear when you wake up Monday morning can always be YouTubed later.

2014 was a pretty great year for popular music, but even if you haven't kept completely up-to-date on all of the Grammy nominees, presenters, and performers, you'll be able to play along. I like to keep my drinking games pretty simple since there's just something about alcohol that makes convoluted rules harder to follow (I wonder what that could be??). So all you need are the Grammys live, plenty of your drink of choice, and a quick response time (another thing that alcohol weirdly inhibits). Then get ready to get your groove and drink on with the 2015 Grammy Awards drinking game.

This rule sounds scary, but I guarantee the Grammys won't actually use LL Cool J that much. Yeah, it may be his fourth year hosting, but he didn't show up much in 2014. And just look at how criminally underused Tina Fey and Amy Poehler were at this year's Golden Globes.

Embrace your ignorance with booze! Let me be the first to admit that I'll be sipping those suds when Lang Lang, Dwight Yoakam, Eric Church, and Juanes hit the Grammys stage.

If You See Sia's Face — Finish Your Drink

Sia has been intentionally not showing her face, so I'm positive she won't reveal her face in her Grammys performance. But if the glorious unicorn that is Sia flashes her face when she's in the audience or if she wins any of the four awards she's nominated for, you better pound down the rest of your drink.

Speaking of Sia, If Maddie Ziegler Performs with Her — Take a Shot

I want — no need— to be able to take this sweet shot of dance victory (and it's looking quite promising). But I will be all sorts of angry if it doesn't happen.

I mean, yeah Kanye West may have discovered McCartney, but he deserves some respect. I also encourage you to take a few extra drinks when McCartney inevitably looks like a woman aging very ungracefully.

Imma let you finish, but you better take that shot.

Alright, Let's Be Real: Whenever Kanye Makes Anything Awkward — First Person to Notice Assigns Someone to Drink

I want you all to survive this night, so please be kind.

If You Find Yourself Shaking It Off — Drink

Swift won't be performing at the 2015 Grammys, but "Shake It Off" is nominated for Record of the Year, Song of the Year, and Best Pop Solo Performance, so it's going to be hard to control yourself. The haters gonna hate.

Why am I so emotional? It couldn't possibly be all the alcohol I've consumed. Six-time nominee (he's tied for the most nominations with Beyoncé and Pharrell Williams) has a special way of bringing on the waterworks.

If Iggy Azalea, Meghan Trainor, or Beyoncé Win Any Awards — Stand Up and Drink While Showing Off Your Best Dance Moves

Unbelievably, Iggy Azalea and Meghan Trainor are not performing during "Music's Biggest Night" (Trainor will be a presenter, but not a performer). And yes, Beyoncé will be singing a gospel song as an introduction to Common and John Legend, but she won't be performing her own music (she performed "Drunk in Love" in 2014). So you'll just have to make up for it by getting down and shaking your own bass since you won't be able to see them shake their's.

There you have it! As your favorite musical artists accept their awards, you'll be accepting another drink to your mouth. What a grand way to wrap up your weekend.