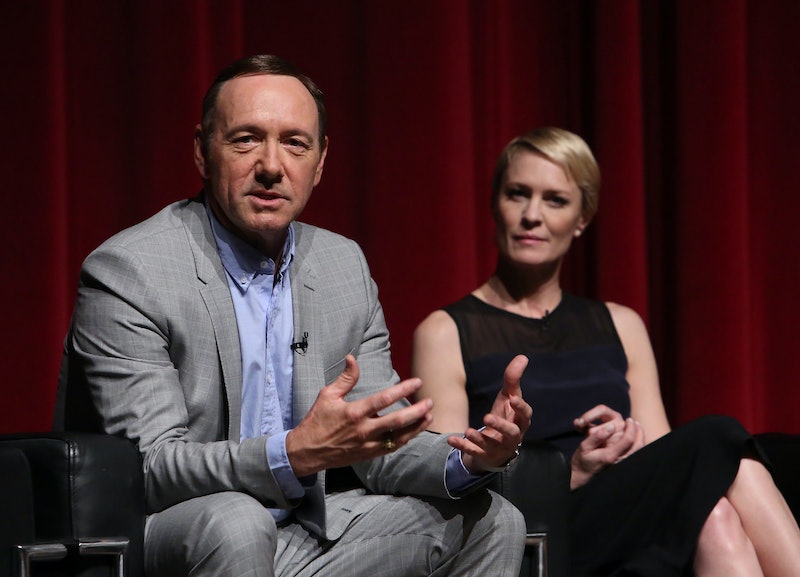 (Caution: House of Cards Season 2 spoilers ahead.) There are only 22 days left until the premiere of House of Cards Season 3, but who's counting? Netflix has shrouded the series in even more mystery than you thought possible and slowly thrown fans scraps about what Machiavellian scandals Congressman Francis J. Underwood would get into in the show's third season. Pardon me — I mean, President Frank Underwood. If you haven't yet seen Season 2, Frank Underwood successfully unseated the president, becoming the holder of the highest office in the land. On Thursday, Netflix released a very short House of Cards "Motion Poster" and even though it's only 12 seconds long, there's still plenty to speculate about. Let's take a look at the clues.

The new motion poster shows Frank and Claire Underwood exiting the door of Air Force One, pausing for a moment (presumably for a photograph), and then descending down the red-carpet lined staircase onto the tarmac. As you might remember from when we obsessively picked apart the first very short teaser for the show, which showed Frank and Claire getting off that same plane from a perspective inside of it, it seems like the plane imagery is going to be incredibly important in this new season — both the first teaser and this motion poster, as well as the still promotional poster, focus on Air Force One as a centerpiece.

My first obsessive thought was to see if I could find a reflection in the plane's shiny surface of where they might be, but then I realized I was crazy. But that's what watching too much David Fincher will do to you; you get paranoid about everything possibly being a clue or a conspiracy. Anyway, we now have more information at hand. This motion poster coupled with the full-length trailer that debuted in December make for some interesting speculation.

In the actual trailer which shows sneak peaks of the dark deeds in Season 3, there's notably no plane. There is, however, a clear shot of a military funeral, Claire Underwood appearing in a hearing in front of what may be the Supreme Court, and several shots of protestors and prisons. There are also frames of Frank and Claire riding together in a limo, staring out the windows in different directions. This tension is totally magnified by all the sad clips of Claire in the trailer: crying alone, laying awake in bed at night, being led away by Frank from something off-screen that has obviously horrified her, and in the final moments, telling her husband the POTUS, "We're murderers, Frank," to which he coldly replies, "We're survivors."

It's that split in their perspective that is causing the most tension, and that growing divide is pretty obvious in the new poster and the motion poster. Frank walks confidently down the stairway onto the runway, looking forward; Claire seems to follow reluctantly behind. Could they be attending the funeral we saw a clip of in the trailer? In the still poster, she's behind him again, and they are looking off in different directions. They started the series as equals and partners with the same hungry and ruthless ambition, but now it seems Claire is starting to crack and her conscience is beginning to haunt her. We'll have to wait and see what becomes of the Underwoods in Season 3, and if they can survive each other.