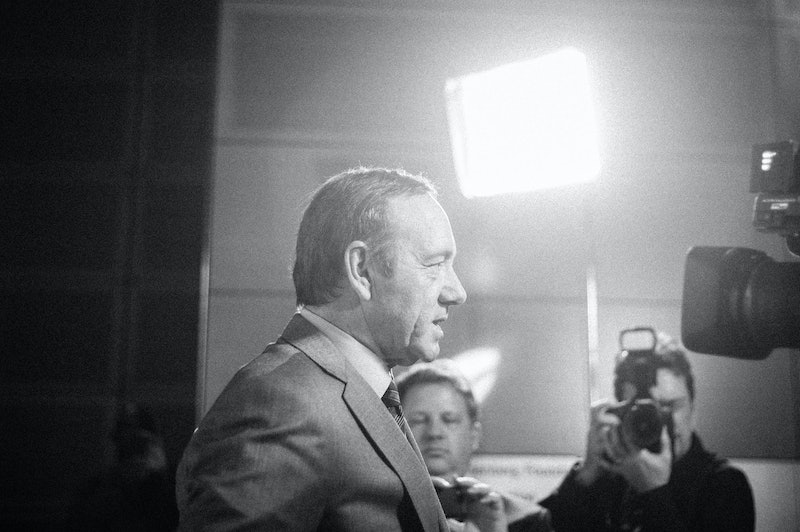 Though I struggle this Monday to accept the fact that it is already December 1, 2014 (why is time so slippery?) at least there's good news in TV-land: House of Cards has released a predictably vague, predictably ominous "teaser" for Season 3 on their Twitter. I say teaser because it was the ULTIMATE tease: they posted a tweet that said "The President and the First Lady will be making a special announcement at 11 a.m.," followed by a 12 second teaser, which is completely silent, just a tiny clip in slow motion of Frank and Claire boarding a plane. Talk about unsatisfying and yet, it's totally effective in making us pull our hair and shout, "But what does it all mean??"

Luckily, being a seasoned fan of the groundbreaking Netflix drama, directed by King of Darkness and Shadows David Fincher, you learn to comfort yourself with theories. House of Cards fans love to discuss the show's conspiracies and secrets almost as much as Serial podcast fans do. So even though this all-too-short teaser is nowhere near telling enough, there's still enough vague symbolism to pick apart (anything is possible for such a TV junkie as myself). Good thing I've got an English degree in my wheelhouse, because it's made me hella good at close reading. Here's the trailer, and what we can speculate from some context clues...

Leaving on a Jet Plane

First and most obvious, Frankie and Claire are boarding a plane. PLANE SYMBOLISM: very popular for show teasers, as you'll remember that Mad Men did it for its seventh season trailers. Usually, of course, planes symbolize death and impending doom, in Mad Men for the fall of Don Draper, and in House of Cards, possibly for the fall of Frank Underwood? It's a pretty somber scene, but that is just the House of Cards universe.

Claire looks MISERABLE. And not in her usual, stone-faced, resigned to being married to a megalomanic politician kind of way. Her misery looks... remorseful, reminscent of the scene in the Season 2 finale where she breaks down in tears after Tricia tells her on the phone that she's a good person (she ain't). Maybe she's been so betrayed and blackmailed by Frank that she's finally like, "Oh sh*t, this isn't good."

The logistical theory: they're getting on a plane, but where are they going? Are they just getting on Air Force One for some ordinary evil president business, or is it something more sinister? Could they be going to China to deal with Feng?

You Made Your Bed

It's all in the outfit: Claire and Frank are both dressed in dark, somber blacks, but that isn't out of the ordinary for them. But the combination of dress blacks and the sheer misery painted on Claire's face make me think they're coming from a funeral (or are en route to one). Who's dead now?

What Are You Lookin' At?

Perspective is everything on this show: Underwood himself narrates throughout, breaking the fourth wall like it ain't no thing. Since the teaser is filmed through the airplane window, I've gotta ask: who's in the plane? Frank stares straight at the camera at the end of the teaser, a.k.a. straight into someone's face.

House of Cards will debut it's third season on February 27, so you have plenty more time to marinate on theories.