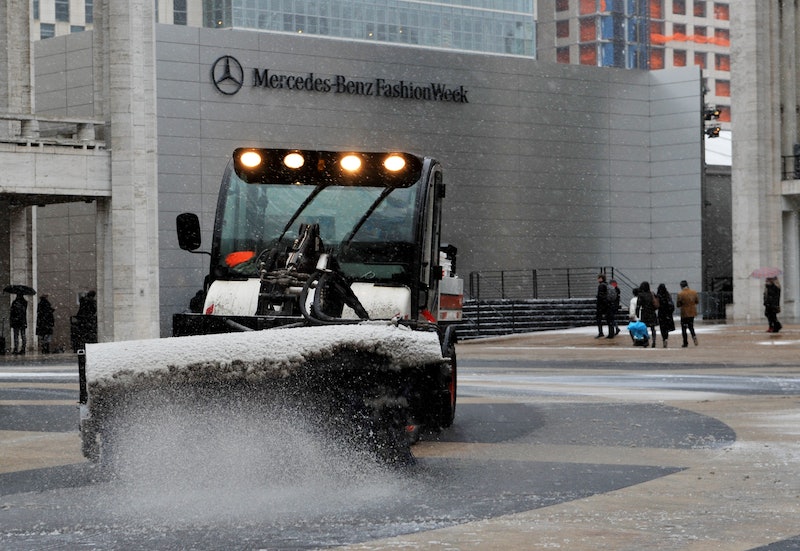 Utilitarianism may be a burgeoning trend, but fashion and severe weather don't play well together. Bad weather has ruined Fashion Week on multiple occasions — after all, water damage is a death sentence to suede and satin, and who wants to bare their midriff or legs when the mercury drops below 32 degrees? With Winter Storm Juno in the rearview mirror and havoc-wreaking Linus on its way out, one can entertain the optimistic notion that Fashion Week will be a sunny, if brisk, affair this year. However, neither the odds nor history are in favor of a 50 degree New York Fashion Week.

Both September and February Fashion Week have coincidentally collided with some of the most horrific storms of the past decade, from Hurricane Irene to Nemo. While the country suffered from property damages, injury, and financial setbacks, the designers and attendees of Fashion Week also experienced hiccups; however, it being Fashion Week, each stumbling block provided more comic relief than frustration. In all honesty, what could be more amusing than a group of six-inch Louboutin-sporting fashion mavens being forced into — god forbid — snow boots? Here are six times unpredictable weather tipped Fashion Week on its head.

The creative tour de force Marc Jacobs stops for no man — except Nemo. Marc Jacobs' much-anticipated show faced down with Nemo and lost, when delays in fabric shipment due to severe weather conditions prevented Jacobs' show from taking place at its scheduled time.

A bicoastal life may seem appealing until it results in a major scheduling conflict. Designer Jenni Kayne planned to fly to her New York show from Los Angeles, unaware that Winter Storm Nemo had other plans. Kayne's show took place with none of the delays or postponement other designers required, with the caveat that Kayne herself was absent.

3. The Time Anna Wintour Was Almost Knocked Off Her Heels By The Wind

It is Anna Wintour's job to attend Fashion Week's most prominent shows come rain, sleet, or snow, but the combination was nearly too much in February 2014. Though the designer was beyond punctual at shows including Ralph Lauren, The New York Times' Elizabeth Lipmann snapped a priceless picture of Wintour stepping into a particularly harsh gust of wind from her car, which appeared to nearly lift the editor's diminutive frame off the ground.

Who knew that Irene was such a mischievous storm? Before the coveted collection of designer Joseph Altuzarra could be shown, Hurricane Irene snatched the virtuoso's fabric shipment and considerable setbacks at the designer's studio.

Wearing stilettos on ice is like attempting to tiptoe on a skating rink, which is why many a disgruntled editor settles for boots come winter. In February of 2014, The New York Times interviewed Laurie Trott about the slippery situation and found that lauded boot manufacturer Sorel had literally been cleaned out by New York-based fashion editors in preparation for Fashion Week. Mansur Gavriel and Chanel are more typical of the brands to sell out popular items, but when winter storms are concerned, anything goes.

6. The Time Editor Aya Kanai Took A Spill Due To The Volume Of Snow

Injuries abound when the temperature dips courtesy of black ice and heating deficiencies, so it should come as no surprise that Fashion Week saw its fair share of spills. Cosmopolitan editor Aya Kanai had the misfortune of tumbling on the ice from February 2014's snow storm, and took an impromptu respite at the hospital. All ended well, but all involved parties certainly learned more than they cared to about the effects of winter storms on Fashion Week ambitions.