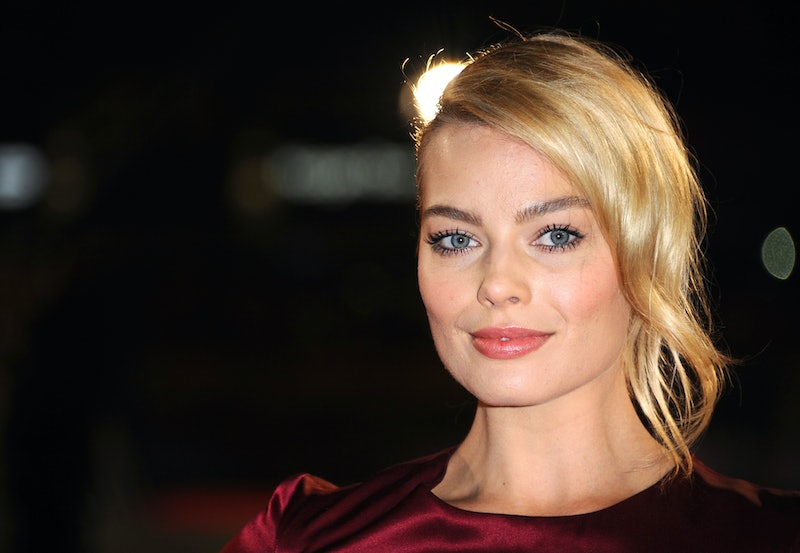 Margot Robbie came onto the screen in Wolf of Wall Street as Jordan Belfort's bombshell wife Naomi from Brooklyn, so it was hard to believe that she's actually Australian. She's obviously talented, and in a new interview with Marie Claire magazine, whose March cover features Robbie in a beautiful '70s blue print, Margot Robbie proved that she also very humble. And it's impressive to hear from a young actress who hit the big time so quickly. Explaining how she's stays so down-to-earth even as her star is rapidly on the rise, she said, "I have a normal 24-year-old life."

It might be hard to believe, but the actress insists that besides acting (and becoming massively famous, of course), her life would be the same if she were doing anything else: "If I were a waitress, I'd probably have the exact same lifestyle. I'd go to the same clubs I go to already, live in the same house with the same housemates, hang out with the same people."

And how does she keep such a down-to-earth point of view? A lot of it comes from her upbringing. Robbie recalls having wealthy friends growing up, and seeing how their lifestyle was different than hers, which gave her drive, but also perspective.

With such a straightforward, low-key, and positive reaction to her increasing fame, it's almost easy to forget that she has just joined the cast of The Suicide Squad as Harley Quinn, with big stars Tom Hardy and Jared Leto. And let's not forget the film that brought her into our consciousness; she was such a fiery match to Leonardo DiCaprio's Jordan Belfort in Martin Scorsese's Wolf of Wall Street that her performance earned her an Empire Award for Best Female Newcomer. In her speech accepting the award, she said that she was pleasantly surprised to find that there were people out there to help her achieve a seemingly impossible dream of being in a movie. (Though she obviously has the talent to hold herself up.)

And as humble as she is, Robbie still gets caught in the spotlight. There's been rumors that she's dating Tarzan costar Alexander Skarsgård, though she says in the Marie Claire interview that she would never date an actor because the relationship would be too high-profile, not because she doesn't love actors.

It's impressive that Robbie has managed to stay so wide-eyed in Hollywood, though I wouldn't go so far as to call it naive. A lot of stars are persistently private about their personal lives, not to seem aloof but to preserve some sense of being, you know, a normal person. At 24, Robbie is definitely still a young, breakout star, but she's obviously going to be something big. I think her ability to stay grounded while taking on bigger and bigger roles will help her through her career.

It seems pretty obvious, even though she insists otherwise, that her life would definitely be different if she were a waitress, but her disposition probably wouldn't be. She seems modest and hardworking, and it doesn't look like she's going to get a massive ego any time soon.