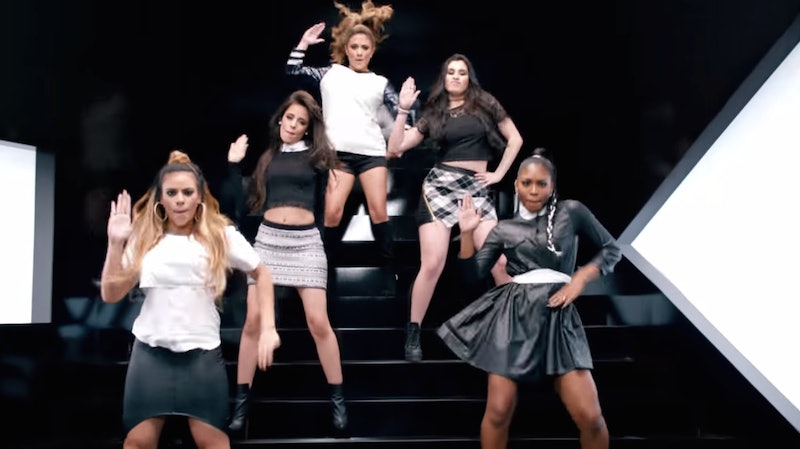 I'm going to be incredibly honest here. I'm not sure what I just watched. It seems like anti-smoking ads are getting more and more hip as The Truth Campaign tries its hardest to relate to me — or, I guess, to people younger than me. Regardless, Fifth Harmony recorded an anti-smoking song alongside Becky G and The Truth Campaign, among others, and it is... something Apparently, people who are depicted smoking in their online dating profiles get half as many matches as people who don't reveal that tidbit about themselves upfront. You know, because smoking is unattractive. Regardless of whether or not you agree with message, "Left Swipe Dat" is going to be stuck in your head all day. I mean, it's sung by Fifth Harmony and all.

The video clearly doesn't try to take itself, or the song, more seriously than it's meant to be taken. From a line about left swiping "Cigarella" to all the inappropriate places people take pictures of themselves with a cigarette in their mouth (during a photobomb: "He just didn't care!"), it's a catchy, good time song that just happens to have a message behind it. And that's kind of the whole point. Heavy-handed messages tend to invite people to make fun of how overdone they are (as Nationwide learned with their infamous "dead kid" Super Bowl ad and its subsequent meme), whereas messages that don't take themselves too seriously in the execution to begin with, but that invite the video to go viral, have a better chance of getting across to people.

So this music video — set to debut during the Grammys on Sunday — might leave you scratching your head and wondering what you just watched, but you'll be singing "Left Swipe Dat" all day long thanks to 5H and Becky G. And there's nothing wrong with that. Check out the music video below.