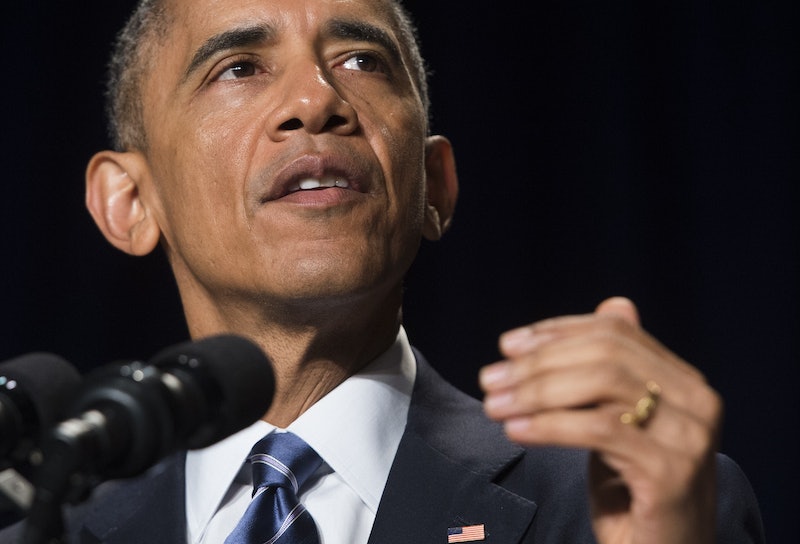 President Obama spent most of his speech at the National Prayer Breakfast on Thursday highlighting the importance of humility and religious tolerance both in the United States and abroad, in places such as North Korea and Iran. In calling out instances of hypocrisy in religion, Obama compared current ISIS atrocities to the Crusades and past bloodshed from other religious groups, saying that humans had a "sinful tendency" to distort religion. Unhappy with the comparison, the President's critics immediately seized on the opportunity to rip his historical commentary to shreds.

Said former Virginia Gov. Jim Gilmore, a Republican, "The president’s comments this morning at the prayer breakfast are the most offensive I’ve ever heard a president make in my lifetime ... He has offended every believing Christian in the United States." Added Bill Donohue, the president of the Catholic League, in an interview with Fox News' Neil Cavuto, "There's no comparison. [Obama] should have kept it more general ... he wants to be above the idea that he's badgering Muslims."

In his speech, the President had spoken out against the "unspeakable acts of barbarism" by ISIS members, including "terrorizing religious minorities like the Yezidis" and "subjecting women to rape as a weapon of war", all under the mantle of religion. He called out those who treated religion as a weapon against their enemies and unbelievers, but duly noted that it wasn't the first time in history that a militant group had hijacked a faith for its own pretenses:

... Faith [is] being twisted and distorted, used as a wedge -- or, worse, sometimes used as a weapon. From a school in Pakistan to the streets of Paris, we have seen violence and terror perpetrated by those who profess to stand up for faith, their faith, professed to stand up for Islam, but, in fact, are betraying it.

... How do we, as people of faith, reconcile these realities -- the profound good, the strength, the tenacity, the compassion and love that can flow from all of our faiths, operating alongside those who seek to hijack religious for their own murderous ends?

Humanity has been grappling with these questions throughout human history. And lest we get on our high horse and think this is unique to some other place, remember that during the Crusades and the Inquisition, people committed terrible deeds in the name of Christ. In our home country, slavery and Jim Crow all too often was justified in the name of Christ

In response to the President's remarks, Conservative talk show host Rush Limbaugh dedicated an entire segment of his show on Thursday to breaking down the speech. "Why would you insult them?" asked Limbaugh, referring to the many Christians in attendance at the Breakfast and suggesting that Obama was simply attempting to "downplay militant Islam."

Christianity is not the problem today. Jim Crow's not around today. A thousand years ago, yeah. But not today. Sharia law is the present day threat to individual and civil liberties all over the world. Sharia is not a narrow cult. Sharia law is Islam. The problem today is not Christianity. The problem today is that people are being killed, captured, conquered to advance and impose Sharia law. The Christians are doing no such thing, and haven't, I don't know if ever, on this scale ... [Obama] doesn't seem to realize or want to admit the great threat that we all face today ... It's not a thousand years ago ... Why in the world is this even on his mind? ... Taking shots at Christianity's past asks people to take their eyes off the ball today.

The thought, of course, was on the President's mind for many reasons. As militant groups like ISIS and Boko Haram continue to pillage and massacre entire villages and murder innocent civilians and foreign soldiers, the level of anti-Islamic sentiment has risen dramatically, especially in the Western world. In Germany, anti-Islamic Pegida protesters, led by Lutz Bachmann, filled the streets in an rally against Muslim immigrants who they believe were responsible for the escalation of extremism in the West — Bachmann himself has also gone on record to decry the rising number of refugees, whom he referred to as "animals" and "scumbags" in a recent Facebook post. In Paris, following the devastating shooting of the satirical newspaper Charlie Hebdo, 17 separate Muslim places of worship were attacked with firebombs, gunshots, or severed pig heads within 48 hours of the tragedy.

If the President did anything wrong in his call for humility and understanding, it was to not push for it harder.

Obama's critics have been swift to point the finger, saying that militant Christianity poses no real threat in today's modern society. What they fail to understand is that, in the darker corners of the globe, Christian fundamentalism still runs rampant, despite claims to the contrary.

In January, a United Nations inquiry discovered that some 6,000 people in the Central African Republic have been killed by extremist Christian militant groups in a terrifying wave of "ethnic cleansing." In April 2010, an Ohio man who called himself a "Christian warrior" and was a member of the Michigan-based Hutaree militia, was arrested and charged in what Federal prosecutors called a "plot to wage war against the government" after authorities discovered 13 guns, over 8,000 rounds of ammunition, a Hutaree uniform, and a "ghillie suit" used by snipers in his home. Nine other Hutaree militia members, one of whom had written up a hit list of federal judges and elected officials, were also arrested for similar charges after raids in Michigan, Ohio and Indiana that same year. In Central Africa, the militant Christian group, the Lord's Resistance Army (LRA), led by the notorious Joseph Kony, has been accused of several human rights violations, including abduction, mutilation, child sex slavery, and murder.

Despite protests from the religious Right, Obama made it clear in his address on Thursday that humanity as a whole must remember where it came from and not point an erroneous finger to lay blame on an entire faction of the population for the acts of a few. The acts of the LRA, Hutaree, and regional fundamentalist militia members in no way speaks for the thousands of voices who call themselves Christian, just as the acts of ISIS and Boko Haram do not speak for the entirety of the global Muslim population.