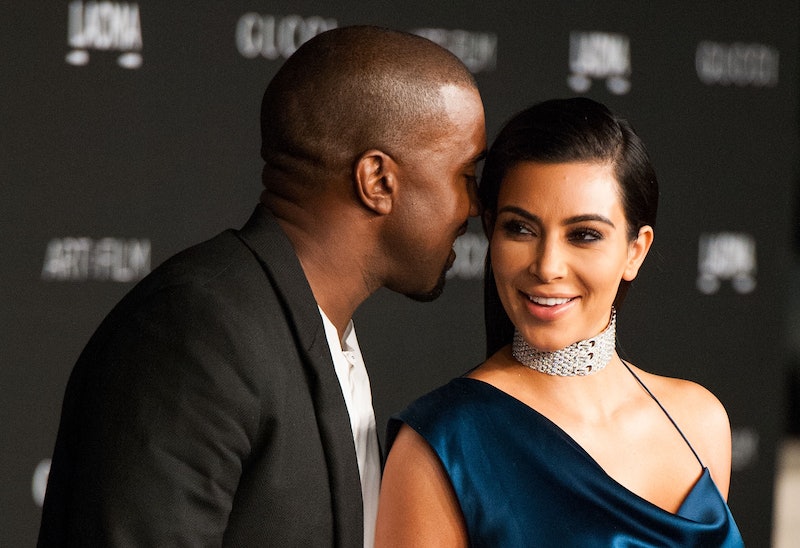 Valentine's Day is quickly approaching, and while some of us are putting our final trimmings on gifts for our partners, others are prepping our Netflix queues and stacking up on bottles of wine. Neither scenario is necessarily a bad one, and neither involves someone designing a pair of $1,000 shoes for you, unless you're Kim Kardashian, of course. Kanye West, designed a pair of Giuseppe Zanotti stilettos for his famous wife that were recently released as part of the designer's 20th anniversary collection.

The Mrs. West (2012) heel was a collaboration between Kanye West and Zanotti that began when Kardashian was only a bride-to-be, according to a description of the shoe on the designer's website. The anniversary, titled the "Rock'n'Roll Collection," is a celebration of Zanotti's signature style and follows closely behind the JEWEL collection that was released earlier this year. And, apparently Mrs. West isn't the only one getting a pair of heels designed in her honor — the designer reportedly adores the couple's daughter, North, who has also received a pair of custom footwear.

Looks like all that talk of West getting serious about being a part of the fashion industry has come to fruition, and we're hoping that it's met with more successes than flops. Just note: Neither Zanotti, nor adidas, nor A.P.C., is Ralph.

If you want to put in a request for a pair of the Mrs. West (2012) shoes, it will cost you about $1,395. But, ladies, let's just be honest, you don't need a man to design you a pair of shoes and there's proof. From sneakers to pumps to DIY, check out these websites that will get you on the road to designing. No promises of Fashion Week presentations quite yet, however.

Even if you don't want to necessarily purchase the shoes, using Nike's ID customizing feature is a fun way to pass the time. From Huaraches to trainers, complementing palettes to dizzying graphics, the options are literally endless.

This website will be the go-to place when looking for a pair shoes to match an outfit or matching shoes for a big wedding day. Shoes of Prey lets users choose everything from the color of shoe strings to varying textiles.

Take your classic hi-tops to the next level with Converse's customizing tool. The website operates much like Nike ID, allowing users to put a personal touch such as your name right above the sole.

Where Did You Get That

Karen Blanchard is known for her alternative style and keeps fashionistas inspired with her fun looks on her blog Where Did You Get That. She also includes DIY projects such as her latest one, in which she dyed her purple brogues.

The blog Cupcakes and Cashmere is known for its DIY features. This one from 2010 gives step-by-step instructions on how to create your own pair of YSL pumps.