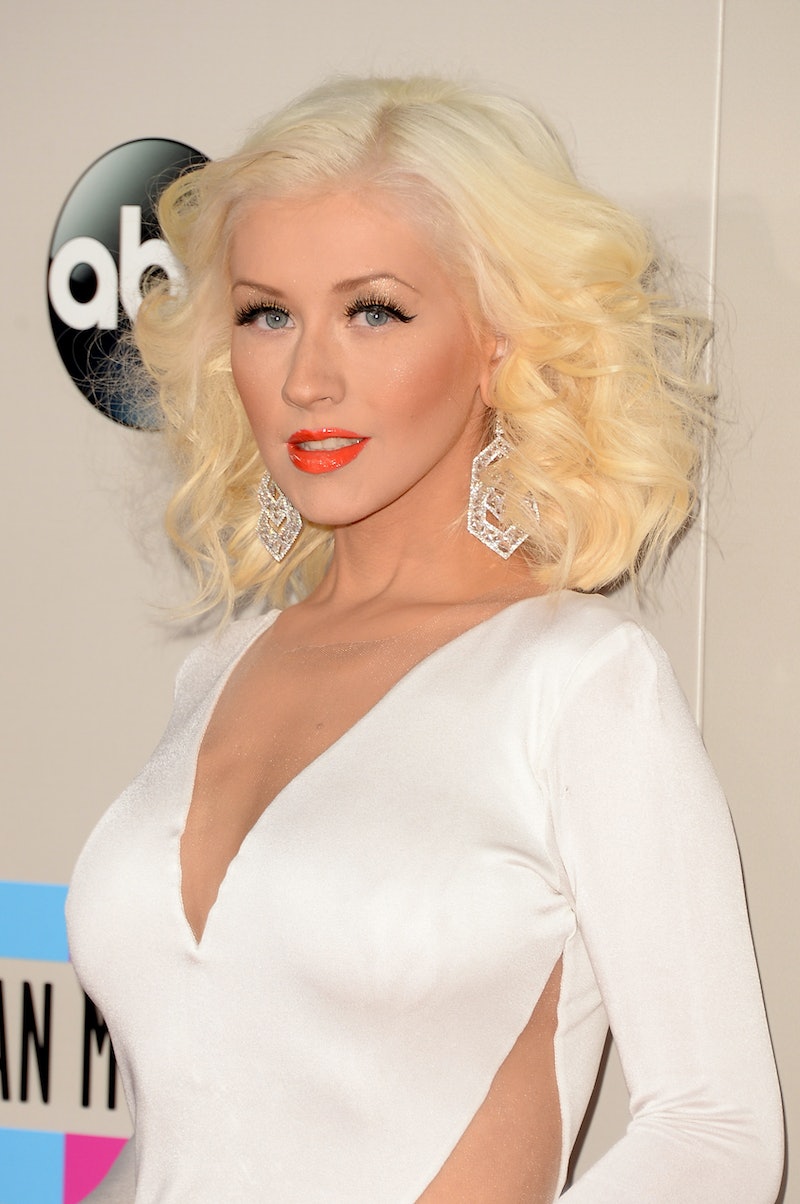 Long gone are the days where you were shunned for being a feminist — within the last year or so, the once-controversial term has been broadly embraced by the media, with pop culture rushing to rally behind the "f word." Beyoncé boldly sampled Chimananda Ngozi Adichie’s feminist TEDx monologue in her song, “***Flawless,” actress Emma Watson spearheaded a gender equality program by making a speech in front of the UN, and now no actress or female musician can get through an interview without being asked if they're a feminist. Which is all wonderful — but we should also take time to remember the pop icons who embraced feminism before it was trendy, like Christina Aguilera.

Back in the early 2000s, Aguilera switched up the bubble gum pop game, writing songs about body issues and sexual double standards, and became a feminist icon in the process. From her fourth album, 2002's Stripped to her most recent, 2012's Lotus, Christina has been in charge of her message and the image she has conveyed within her music, and has become a powerful role model for women.

Stripped's "Stripped Pt. 2" is a gauntlet thrown, with the lyrics “Sorry, I’m not a diva, just know what I want/ Sorry I ain’t a virgin, sorry, I’m not a slut." My 13-year-old self was shocked when I first heard the song, since Aguilera's stance was so different than the many sexually charged yet “pure” pop stars who were on the scene at the time. But I had so much respect for Christina for being unapologetic. She knew her platform and used it to help showcase what women can really be like: flawed, powerful, outspoken, sexual and beautiful in many different ways. In celebration of her ground-breaking work, here are five of the best girl power anthems by Christina Aguilera.

“Beautiful” is Christina’s feminist magnum opus. It was the follow-up to her very controversial video and song, “Dirrty,” which introduced a new look and image for the once cookie-cutter pop princess. The lyrics, penned by Linda Perry, speak to all men and women who have had days where they haven’t felt accepted, wanted, loved and most importantly, beautiful. The video for the song was equally powerful, as it showed people from all walks of life — including a young teenage girl struggling with her body image, an older male discovering his drag identity, and many other types of people that are normally not visible in pop music videos.

In this track, Christina reflects back on both her troubled upbringing and the tightly-controlled pop image that typified the beginning of her career — and channels her feelings into a rock-fused anthem that struck back at all people who have tried to bring her down. She grew from those moments of pain, and used them to make her “much stronger/ make (her) work a little bit harder.” Not only is X-Tina stronger, but this song suggested that her listeners could overcome their own personal obstacles and feel more powerful, too.

They don’t call her "X"-Tina for nothing. On “Get Mine, Get Yours,” Christina doesn't hold back as she details a no-strings-attached relationship. Using lyrical imagery, she paints a picture of the complete experience, from the foreplay to the sex (and the emotions, as well), and it’s like a 90’s R&B male group track. In the song, Christina isn’t shy about her sexual needs — an attitude which society should more actively embrace, so that women no longer feel ashamed when they're looking for something that doesn’t necessarily require love. Sometimes, a single girl just needs to get Dirrty.

In this heartfelt ballad, Aguilera discusses the hardships of trying to escape an abusive relationship — and becomes part of a feminist poetic tradition in the process. Feminist poet Audre Lorde, in Poetry Is Not A Luxury, said, “poetry is the way we help give name to the nameless so it can be thought.” In this song, Christina is using her poetry to shine light on the many women who are victims of domestic violence, who are silenced by their abusers and unable to escape.

On this track, Christina teamed up with the original Queen Bee — Lil’ Kim — for what should be considered one of the most important feminist anthems of the 21st century. “Can’t Hold Us Down” calls out society and the media for perpetuating double standards when it comes to sexual behaviors. Men are applauded for their sexual activities and even encouraged to sleep around, as Christina notes in the song, whereas women are chastised if they wear anything provocative, project sexuality and express any kind of enjoyment towards sex. This is unacceptable, which is why it's so great that we have this song that shuts sexist men, media, and social standards down, and asserts that we can wear and do whatever the heck we want. Can’t hold US down!

Bless, Christina for providing us with so many anthems to empower us.