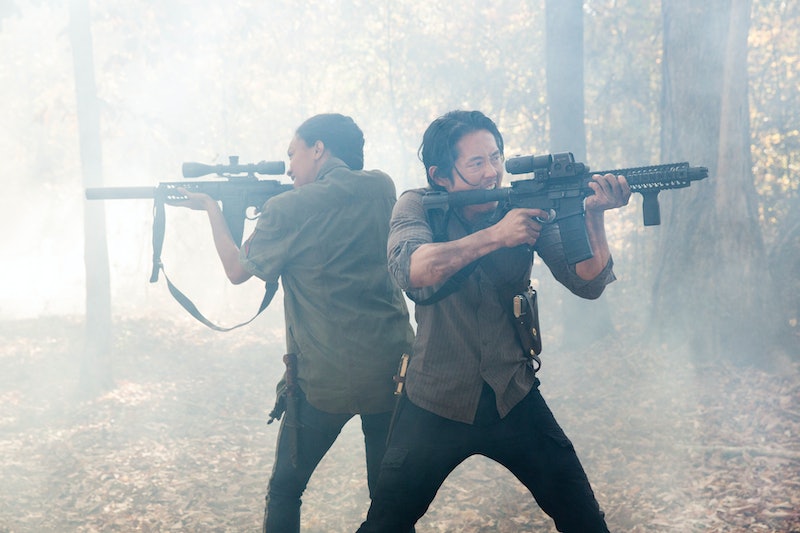 One thing I love about The Walking Dead is that it rides the line between campy monster and artsy independent film. For example, every episode title is brimming with double meaning. The Feb. 22 episode of The Walking Dead is called "The Distance" — what all could that mean? Could the show finally be acknowledging that it takes a really long time to walk from Georgia to Washington, D.C. on foot? More time has passed on this show than they'd like you to believe. Flashbacks, ghosts, and hallucinations are not helping with that.

You could posit that the inclusion of the word "the" eliminates all verb forms of the word and focuses only on the different meanings of "distance" as a noun, but what fun would double entendres be if you stuck to the strict laws of grammar? We have to branch out if we're going to embrace all of the symbolism that The Walking Dead has to offer.

The official description of episode says, "After withstanding a spectacular storm, Rick and the others meet what appears to be a friendly person, but find themselves mistrustful."

Well, finally! It's about time they stopped trusting friendly-seeming strangers. Although, this particular person is most likely Aaron, who means them no harm. What does anything here have to do with "The Distance"? Let's get analytical and break this thing down.

As many of you may know, there's an easy way to calculate how far away a thunderstorm is from you at any given moment. All you have to do is count the seconds between a lightning strike and a thunder boom, and the storm is one mile away for every five seconds that you count. This is exactly the type of folksy tidbit that I would expect to crop up on The Walking Dead without a handy dandy Weather Application to tell them the forecast.

This could be referring to the physical distance between the group and Washington, where they are now headed instead of Richmond. This explains how they'll get to the Alexandria Safe-Zone, at least.

It sounds like Rick Grimes and the group are trying to keep their distance from this mysterious friendly person. Safety first, y'all.

There's also the concept of "appearing distant," or cold. This could apply to many characters at this point in the series, in particular Maggie, who isn't dealing well with Beth's death.

In the Feb. 15 episode, Maggie asked Sasha how much longer they had. When Sasha answered with an ETA for Richmond, Maggie darkly retorted "I didn't mean that." Could that be foreshadowing what's to come in "The Distance"?

On a similar note, "the distance" is also what we use to refer to the fixed length of a race and "going the distance" in boxing means to last all possible rounds of a fight. I can't see when the The Walking Dead would have time to schedule a footrace or a boxing match, but it could refer to a character's backstory or an encounter with walkers.

Besides the song from Hercules, the expression "go the distance" also means to finish what you started and see something through to the very end. This makes a lot of sense for The Walking Dead. Eugene wanted them to go to Washington. Their reason for making it has dissipated. However, they're doing it anyway. It's very noble.