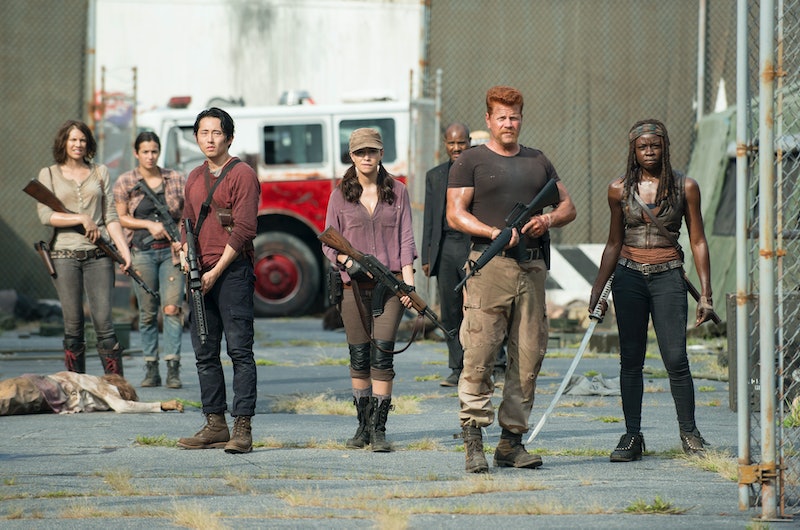 I'm expecting big things from the second half of The Walking Dead's Season 5 (which returns to AMC on Feb. 8). And one thing that fans have been speculating may be on the horizon for our favorite zombie-killing group is that they will arrive at the Alexandria Safe-Zone from the comics. The first two minutes of the Season 5 midseason premiere show Rick convincing the group to head up to Virginia, which had been Noah and Beth's plan (before Beth died). They are going to go outside of Richmond, which is (or I guess "was" would be more appropriate for the zombie apocalypse) the capital city of Virginia. I would not be inclined to move toward any capital city for fear that it would be super populated with zombies, but for readers of the comics, the fact that the group is headed that way means one very important thing: that the group may get to the Alexandria Safe-Zone. (In case you didn't already anticipate the fact: Walking Dead comics spoilers will follow.)

The Alexandria Safe-Zone is a huge location in the comic books. The Hollywood Reporter wrote that the Safe-Zone "makes its debut in the 69th issue of the comics — and remains the story's central location through its current, 136th issue." The outlet also spoke to showrunner Scott M. Gimple who would not confirm that the show will get to Alexandria in Season 5, but said, "Whenever we get to Alexandria, it will probably have stuff that's right out of the comic book and stuff that's different." Very specific, Gimple. Thank you for that.

At least we know that The Walking Dead will have to get to Alexandria eventually. And once there, what should fans expect? The Safe-Zone is a walled-in community comprised of a few blocks in Alexandria, Va. with homes and farms. (If you've never been to non-zombie apocalypse Alexandria, the historic section is super quaint and adorable with lots of shops and restaurants that draw in tourists.) So, think a more established Woodbury minus the Governor (thank the zombie gods). Although the word "safe" is in the name, that doesn't mean Alexandria isn't without danger (uh, of course). But there are good people that are a part of Alexandria — like Aaron (speculated to be portrayed by Ross Marquand), a recruiter for the Safe-Zone, and his boyfriend Eric.

Douglas Monroe is the person in charge of the Safe-Zone when Rick and his group arrive in the comics. Although far from perfect, he is focused on keeping the community safe. But because Rick is Rick (aka the best), he eventually becomes the leader of the Alexandria Safe-Zone (Rick Grimes for president! I love that people just recognize his leadership abilities almost immediately and defer to him).

Using Google Maps, I discovered that Atlanta, Ga. is approximately 530 miles from Richmond. And Richmond is 100 miles away from Alexandria, so the gang has quite a ways to go before getting to either destination. (I also want to note that Alexandria is less than 10 miles away from Washington DC, so that bastard Eugene will kind of get his wish if the group ends up there, dammit.) From the Season 5 preview, it looks like they've picked up some vehicles, so they may be able to drive. But we know the zombie-filled road is a treacherous one.

Even if The Walking Dead doesn't get to Alexandria this season, we know it's coming. And I'm looking forward to the group finding a place where they can actually stay for awhile. And for Rick to continue to be the badass leader that he is.