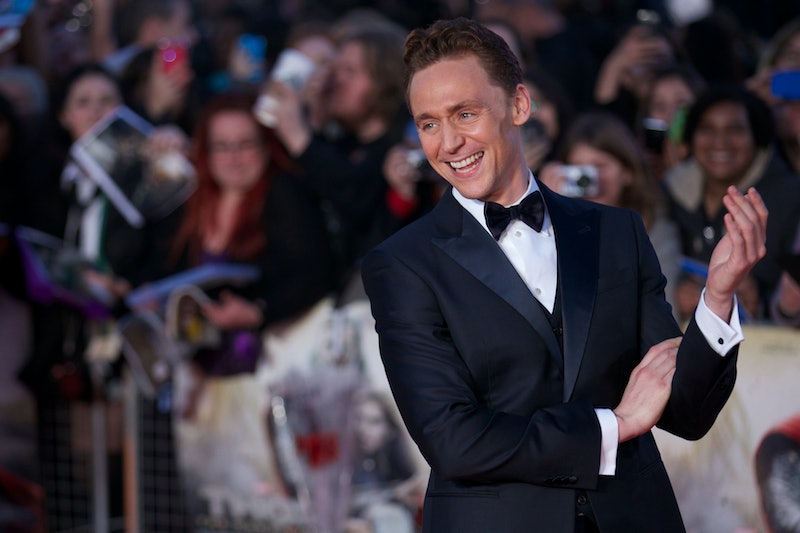 Ah, a beautiful day is upon us: Tom Hiddleston' birthday is here. It's hardly like we ever pass up an opportunity to talk about the classically trained actor's best attributes, but clearly we should spend some time especially dwelling in it on his birthday. It has, after all, been a relatively quiet year on the Hiddleston front — we got Thor: The Dark World in November 2013, and we got Only Lovers Left Alive that year, too; but we only got a Muppets Most Wanted cameo and The Pirate Fairy in 2014. Never fear, though, Hiddlestonians: Hiddleston's got quite the slate lined up for us in the coming year and beyond.

For real, though: 2015 is going to be a mighty busy year for Hiddleston. From a return visit to the Avengers and a pretty big biopic, to an American television debut and a Guillermo Del Toro movie, the newly minted 34-year-old has a lot on his plate. Luckily for all of us it's a pretty juicy plate — there's a lot to bite into.

Here's what you can look forward to in the realm of the Hiddles in the coming year and beyond:

This one was supposed to be kept a secret, considering all that previous talk of Hiddleston very much not being in another Avengers movie. But Idris Elba spilled the beans, much to Joss Whedon's consternation, and both Elba and Hiddles will be making visits from Asgard in Age Of Ultron, even if only for a brief scene.

Hiddleston will be going from Asgard to a high-rise building that goes completely bonkers. He plays Dr. Robert Laing, and according to Empire and io9 he will be participating as this building turns into a "bacchanalian den of iniquity." Damn, sign me up.

I gotta be honest, this is my most highly-anticipated Hiddleston movie of the year. Directed by Guilermo Del Toro, we don't really know what's up with Hiddleston in this film — we just know it's enough to freak onscreen wife Mia Wasikowska out in a monumental way. Is he a murderer? A werewolf? Who knows! But Jessica Chastain will be there, too, and the behind-the-scenes fun of that set is what produced these photos. Basically, I need this press tour to happen and this movie to be released immediately.

I Saw The Light

Hiddleston may have butted up against his biggest casting controversy yet when Hank Williams' grandson wanted Matthew McConaghey and not the willowy British thespian to play the legendary country musician, but I'm already sold on this one. It's clear that Hiddleston's been working his tail off to nail the character and the whole country music thing, and he got some pretty high praises from the film's music producer, Rodney Crowell.

Hiddleston' coming to American TV! Rejoice! And there will definitely be spies and sting involved, and also Hugh Laurie. Hiddleston will be playing Jonathan Pine, a "British soldier turned luxurious hotel night auditor" who finds himself in some hot water and has to go undercover.

I haven't really accepted that they're making another movie around the King Kong concept, but Hiddleston sweetens the deal for sure, as does Michael Keaton.

Things are sure to get mighty cray in this addition to Marvel's Phase Three, and of course Hiddleston is required to be a part of that. It should be noted here that "Ragnarok" means "end of times." Did I mention it's gonna get cray?