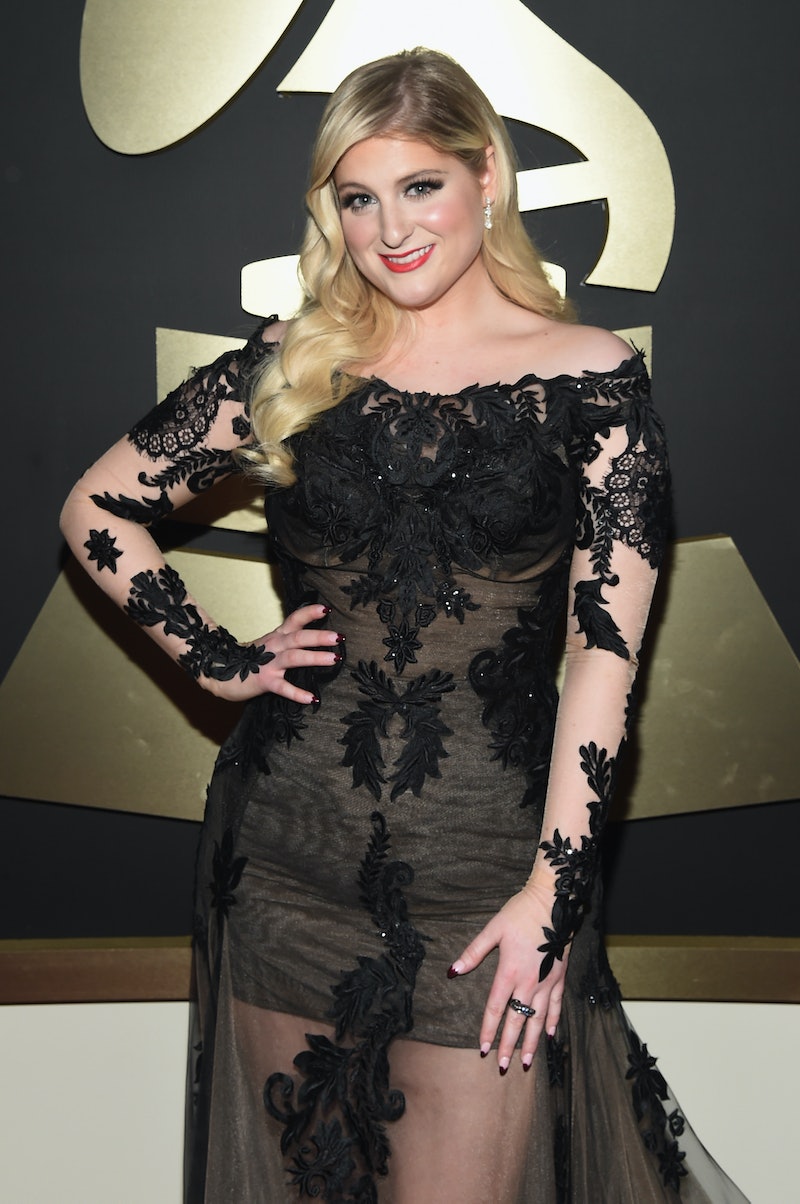 I will admit that I'm not the biggest Meghan Trainor fan. If you ask me, "All About That Bass" was one of 2014's worst moments in body image for its skinny shaming tactics, and when all she could think to ask Fergie at this year's American Music Awards was something like, "How often do you work out?" well, I was less than impressed. But when it comes to clothes, my interest as always been rather piqued. At those same AMAs, Meghan wore a fabulously simple Ted Baker dress. And I'll never forget that her "Lips Are Moving" ensembles included that sequined kitty cat co-ord set that Katy Perry similarly rocked. When news broke that Meghan Trainor for Clinique was happening, I figured this was emblematic of something: Maybe Meghan's journey into "style icon" status — or maybe just Clinique's desire to "keep things fresh..." Either way, she's doing something right when it comes to her look, and I was definitely intrigued by what she'd wear at the 57th annual Grammy Awards, where she is nominated for Record of the Year for All About That Bass, as well as song of the year for, what a surprise, "All About That Bass."

Tonight, Meghan seems to have blended the quirk from her "Lips Are Moving" outfits with the understated glamour of her Ted Baker dress. Her sheer and embellished black gown by Galia Lahav is something some would definitely call boring, but I like to think of it as "classic." I mean, you can't go wrong with a black gown, right? And sometimes in this world, you just have to opt for comfort and security rather than experimental whimsy (although the sheer detailing definitely adds an element of fun). Ultimately, the Grammy's are probably the most prestigious award ceremony that 21st century music knows, so it makes sense she'd opt for something a little more subdued.

That being said, I do wish we'd seen more sequined kitty cat and less safety. If for no other reason than weird fashion is a lot more interesting. On the adorable side of things, Meghan brought her dad as her date. So you have to give her cuteness kudos for that alone.