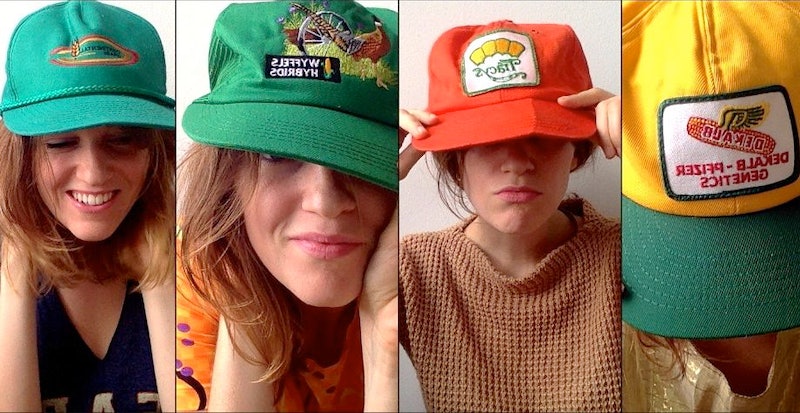 The shoes that carried you through a New York City summer, a perfume that reminds you of a freshman year crush, the weird vintage necklace that inspires you — these are the pieces that make personal style meaningful, and we're here to highlight them.

My grandpa doesn't know that I have four of his baseball caps.

(Yes, my friends, this is the face of a hardened criminal.)

Over the Fourth of July, I was hanging out in the basement of my grandparents' house with my 20-year-old brother (whose college athlete style can be described, non-ironically, as swagging). We mulled over the past the way you always do with your siblings during vacations: How we used to play pool on the ancient pool table, that time Grandma found a mouse in the kitchen, the night we staged a play in this very basement (if you must know, it was a terrifying murder mystery). As we lounged and chatted, we noticed a plastic bin half-hidden in one shadowy corner.

As curious as our old childhood selves, we pulled out the bin and dumped its contents on the pool table. My brother must have said something appropriately awestruck, like "Sick!" because the contents were better than a pot of gold, especially for a college kid: A huge collection of brightly-colored vintage baseball caps.

On second look, we realized that they weren't baseball caps per se. My grandpa is a farmer, and as such, he has a never-ending need for hats with brims to protect his face from the relentless country sun of the Midwestern summer. These weren't caps emblazoned with sports team names; they were complimentary hats given to him by seed suppliers, tractor dealers, insurance companies, and others in the corn and soybean biz. This was, in short, something even more amazing than our young minds could comprehend: Farmer Swag.

My brother and I tore through the collection, snatching up our favorites. Some of the caps were literally crumbling with age, and I'm pretty sure we found a very large, very desiccated insect (OR PART OF A MOUSE) in the bin, but we also found maroon caps emblazoned with pheasants, hats embroidered with logos from long-closed golf clubs, and enough vintage kitsch to make the most hardened hipster week in the knees. However, these hats weren't some overdone signifier of indie cred — they were real. These were our grandfather's caps. Bright, crumbling reminders of the land — and the farmer — that we descended from.

We tried on the caps, in all their peacock colors, in the tiny warped mirror, and collected armfuls.

I ended up leaving the farm with a perfect collection of four, in the brightest colors I could find. My brother and I never asked, exactly, if we could have the hats. We may have smuggled them upstairs under our sweatshirts, casual as cat burglars. But we don't feel guilty. We know that we'll be wearing these caps the next time we show up to our grandpa's farm, all proud and emblazoned with the names of the seed companies that provided the corn that provided the harvest that sent my mother to college, helped my uncles get married. And my grandpa will tear up with pride when he sees these hats on us. He'll love that we wear them. And he'll know we wear them for him.

We wear these hats for us, too. They're so awesome. No one else has hats like these, still sweat-stained from the Illinois fields. Well — almost no one. A few weeks ago, I was ordering a sandwich at a tiny little shop near my apartment. The boy who took my order kept staring at me intently. I was unnerved.

"Tracys! It's a seed company, right?" He pointed at my hat.