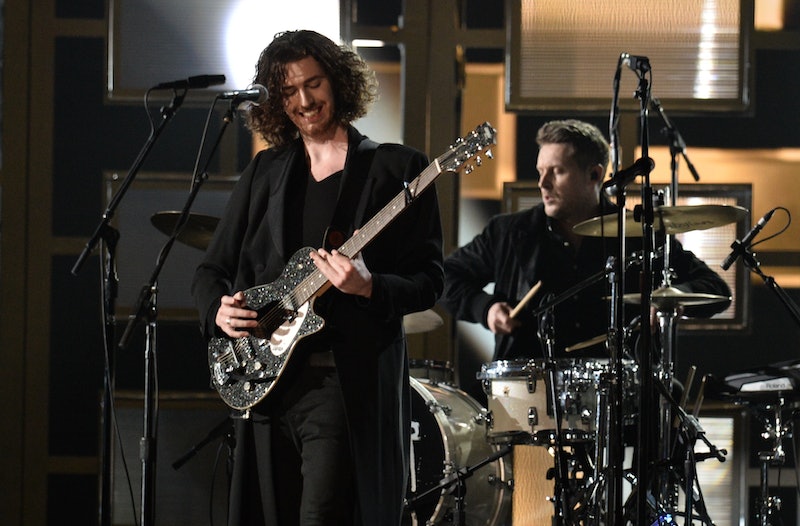 I'm pretty sure that to be a rock star in the 1970s, long hair was a prerequisite. But it's rare for most modern musicians to (mind the pun) rock that look, so has Hozier ever had short hair? The Grammy-nominated singer performed "Take Me to Church" at the Grammy Awards on Feb. 8 (and got completely upstaged by Annie Lennox) with his usual luscious locks. Now, I'm a big fan of men with long hair — I even think that man buns are an acceptable hair style — so while some may find Hozier (full name Andrew Hozier-Byrne) more Kenny G than sexy, I think long hair suits the brooding Irishman.

In an interview with New York Magazine, not only was it revealed that Hozier's musician father also has long hair, but that Hozier himself has very minimal hair care maintenance. When asked about long hair tips Hozier said, "Just don't brush it too much. I just hate getting my hair cut. Something in the water." So has the man who just wants to get taken to church (seriously! get him there!) ever had short hair? Well, thanks to the power of Twitter, we found photographic evidence that the 24-year-old indeed has:

OK, so now we know he has once had short hair — and doesn't look half bad in either look. What's yet to be seen is if we'll ever see him again after these 2015 Grammys.