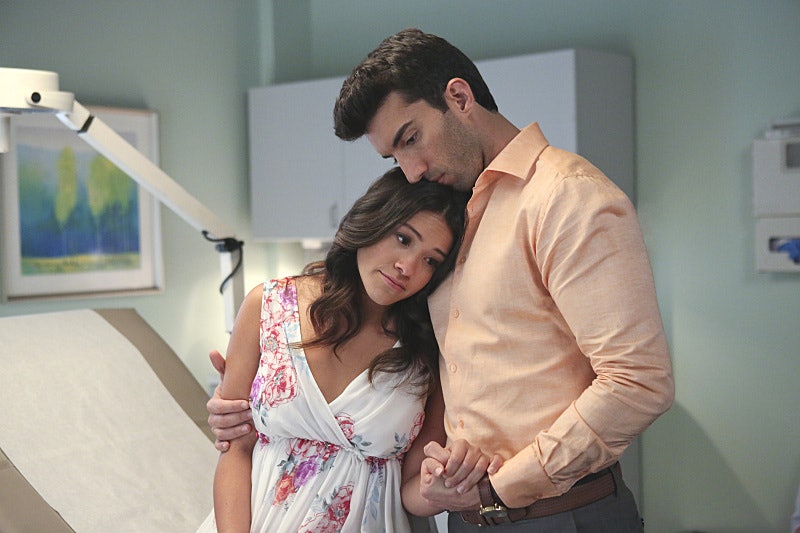 Much like Ugly Betty before it, Jane the Virgin keeps its telenovela influence alive in its many twists and turns, along with the show's sweet, lighthearted tone. The CW dramedy even features its own telenovela-within-the-show and real-life telenovela veteran — Jane's biological father Rogelio stars on the fictional The Passions of Santos and is played by actual telenovela superstar Jaime Camil. Because there really isn't anything else like a good ol' telenovela filled with plot twists, melodrama, and a wise priest somewhere in the mix. It's well-known that Jane the Virgin is loosely based on the Venezuelan soap Juana la Virgen, but it also could've been inspired by other telenovelas.

A recent NPR article pointed out that telenovelas tend to fall into two categories of story models: Ranchera, which takes place — you guessed it — on a ranch, and "working-class-girl-meets-a-rich-man story." No doubt Jane the Virgin and Juana la Virgen both fall into the latter type of story, since main character Jane Villanueva becomes pregnant with the wealthy Raefel's child after a very big mistake at the OB-GYN by his own sister, a doctor. Oh, and Jane the Virgin takes place in Miami, not on a ranch, so that settles that.

In the mood for more soapy goodness? Then check out these similar telenovelas that fall in line with The CW's newest hit show.

This 1994 Colombian telenovela takes its viewers into the world of coffee harvesting, Europe, and human trafficking. Gaviota, a coffee harvester, has a passionate fling with Sebastian Vallejo, the grandson of a coffee businessman. They keep their young love a secret from their families, but she finds out she's pregnant once Sebastian returns to school in London.

What's a girl to do? In Gaviota's case, she follows him, but a human trafficking network tricks her into becoming a sex worker. So the similarities between Jane the Virgin and Cafe con Aroma de Mujer end with a surprise pregnancy, as the CW series hasn't tackled any issues like human trafficking.

In this 2004 Mexican series, Maria Salome (played by Ana de la Reguera) is a gypsy woman who falls in love with a non-gypsy man named Sebastian (Manolo Cardona) — and complications ensue. Too bad gypsy law says their romance is a no-no. Sebastian's family also looks down on Maria's gypsy ways. Much like Jane the Virgin, the worlds of Gitanas operate by their own rules and they must work together so love at first sight overcome all this.

Wildly popular singer and actress Thalia starred in this 1995 Televisa series that has been broadcast in more than 180 countries. The show follows Maria (Thalia), an orphaned garbage picker in Mexico City. Yeah, that's right — she's so humble that she works with garbage, the poor gal. Through a wise priest, she becomes the live-in maid of influential and rich businessman Fernando De la Vega.

Of course, things don't go so easily at first, but Maria does fall in love with Fernando's son Luis. While Jane isn't quite as humble — she works at a pretty nice hotel, not the local dump — both she and Maria fall for men related to powerful rich families.

Even, or maybe especially, in the world of telenovelas, love isn't easy.

More like this
Shonda Rhimes' Net Worth Makes Her One Of The Wealthiest People In TV History
By Hugh McIntyre
'The Rings Of Power' Episode 7 Will Feature An “Unlikely Pairing Of Characters”
By Grace Wehniainen
At 14, Jurnee Smollett Was Taking Meetings With Missy Elliot & Lauryn Hill
By Chloe Foussianes
'Firefly Lane' Season 2 Will Be The Show's Last — But There's A Twist
By K.W. Colyard and Grace Wehniainen
Get Even More From Bustle — Sign Up For The Newsletter