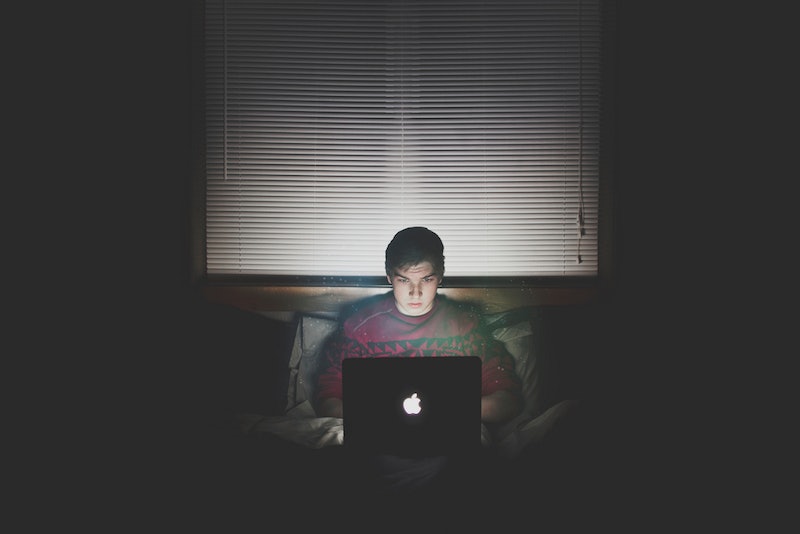 Consider, for a moment, movie trailers. They're exciting, right? They hook you in and make you anxious to learn the whole story; to relish in the surprise, the anguish, the plot line unfurling in real cinematic time. That's what a good movie trailer does, yes? In order to reap the full enjoyment of watching said film, though, requires some restraint: You can't go too deep into learning about the cast and crew, reading the book it's based on, perusing think pieces, watching behind-the-scenes videos, or viewing stills from the actual movie unless you want to ruin all element of surprise when you finally see it. Before you know it, once you gain enough peripheral information, there's no surprise left. You already know, or think you know (which is potentially worse), how the movie is going to play out. There's hardly even any point in even going to the theater anymore. The same could be said about limiting your "online research" of a date before the first time you go out: It's understandable to want to gather as much info as possible when you're excited about something, but attempts to do so might actually be robbing you of the fun part.

Someone's dating profile (or the things you've heard from friends who are setting you up with them, or the exchange you had when you first met, if you're dating in 1998), and the initial text exchange setting up the first date is basically the trailer to the relationship that will or won't ensue. That relationship might turn into The Real Thing. It might just turn into a one-night stand. Or perhaps it will end up being a disastrous-yet-hilarious anecdote you will share at dinner parties for years to come. Besides the whole potential of ruining the ending (or beginning, as it may be in this case), there's a lot of reasons you shouldn't go deeper in your research than the initial trailer before a first date.

It makes you form a possibly unrealistic expectation

Fellow control freaks, I feel you. It's a mighty attractive impulse to go ahead and predict your happily-ever-after future with someone you really don't even know yet—but it doesn't work that way. Despite our compulsion to plan everything and never suffer the rug-pulling surprise life has the tendency to throw, it's impossible. As such, if you really feel ready or anxious to get started on life with your Forever Partner, you're probably going to stitch together research to support this person as a reasonable candidate—whether or not they actually are one.

The truth is, doing too much research about a person before you know them well in real life does nothing but give you fodder for building a false ideal about who they are, thus setting you up to be disappointed by someone who might've been a completely awesome person if you hadn't built them up for failure.

It can make you feel insecure for no reason at all

Maybe this person has one girl likes ALL of their Instagram posts: WHO IS THIS GIRL? Maybe there are several girls: WHO ARE THESE GIRLS? Chill, it's likely nothing. But even if it is, you have no right to feel threatened or annoyed by this, and in fact, should try not to be bothered by this stuff in general. The point: Poking around on someone's social media before you have any idea about the landscape of their life gives you way too much room to start questioning their relationship with other people. You barely know this person! You aren't in a relationship with them! You must chill!

What if you accidentally double-tap?

After a certain time of day, social media stalking becomes even less advisable. If you get caught diving deep into their digital, possibly dirty past, all bets are off. You should probably call the date off, too. Chances are, they won't find this kind of behavior revealed as adorable as you hope.

You don't need to see their ex

You discredit the potential of physical chemistry

What a wonderful world of technology and relative ease we get to experience each day. Regardless, at the end of the day, we are just animals driven by biology. Take into account the huge power of pheromones when it comes to attraction. Eye contact and body language also play big roles. These factors may be observed only through IRL interaction. The most important things in this budding relationship cannot be sussed through online stalking. You're pretty much just going to have to wait until you're in actual physical proximity to one another.

It's easy to feel like there's a whole lot of shinier, better-read options out there when you're perched on laptop at home in your fashion sweatpants. You can be zealously snobby about someone's music taste (Phish? Really?) or past lifestyle choices (hackey sack at a Phish show? Really?) without ever having met the person. Ultimately, we all have weird little quirks or nerdy (or crunchy) skeletons in our closets. When you learn about these from a person over time—as those who dated pre-Internet did—they are likely more acceptable, if not downright endearing. You aren't supposed to find out the embarrassing or unsexy parts of a person until you like them enough to not care! That's just science. But should you know all about someone's Phish elbow tattoo before you ever see them without a shirt on, you might have problems not obsessing over it while they lean on the bar to order the first-ever basket of fries you two share.

It's going to make you more nervous

Science says so. Think about it: They're a total babe (you knew that already, which is obviously why you swiped right/agreed to be set up with them/gave them your number). But think about this: Further probing into their lives via online stalkery might unearth a wealth of information backing their impossible coolness. Perhaps they are a decorated sommelier who has a lot of respect in the wine world. How much more nervous is that going to make you when you slide up to the bar and your brain can only think "uhh, Tecate" when the bartender looks to you for your order? Gross, no. You're going to psych yourself out and get even more nervous than you already would be.

Assuming not everyone is hip enough on Google SEO rules and also narcissistic enough to employ them in their own online representation, there is likely a mix-bag smattering of results when you Google a person's name. That leaves the scattered evidence of their online life open to your own (probably biased) interpretation. That sucks for them.

You wouldn't want someone to do it to you

We tend to forget most of us have been aggressively online for at least a decade. You may have forgotten, but the Internet did not. That doesn't sound like a long time, but it certainly extends past several stages of your development into the amazing, intelligent, grown-ass person you are today. Your emo phase? It's there. That one time you tweeted something resembling mild applause re: Iggy Azalea? Also there. And even though there is a time-stamp identifying those unsightly moments as things of the past, that might not matter to the person on the other side of the screen. Their potentially deranged judgement is what aligns all this unconnected info about you in a distortedly assembled way. Sound cool to you? Probably not. Don't be a hypocrite, bb. Some things (most things, actually) are better found out organically. That's the fun of this whole dating thing anyway.

More like this
The Best Time To Date After A Breakup, According To Experts
By Bustle Editors
The “Whisper Method” Is The Latest Manifestation Technique Going Viral
By Meguire Hennes
The Top Mistakes Scorpios Make In Relationships (& How To Avoid Them)
By Nina Kahn
Are Leo & Capricorn A Good Match?
By Kristine Fellizar
Get Even More From Bustle — Sign Up For The Newsletter