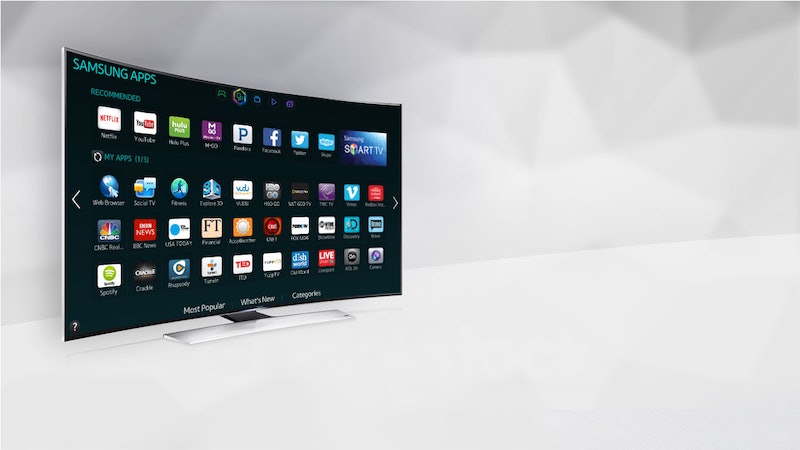 Can smart technology be too smart? Samsung's Smart TV certainly begs the question. If you have one of the company's super-convenient SmartTVs — which are decked out in fancy features and easy usability perks — you might want to take your private conversations out of the TV room, because someone finally read the privacy policy and discovered that your Samsung Smart TV is listening in on everything you say.

When you speak in front of your SmartTV — whether you're giving it a voice command or just chatting with another actual human — your TV is talking back, just not to you. Samsung is collecting your conversations from the voice recognition feature and sending your words to third-party services, which convert them from speech to text. The company is ostensibly using the information from the recordings to improve the SmartTV for user experience. In other words, Samsung is trying to make your tube even smarter, so it can serve you in a more customized fashion, like a personal assistant.

While the Internet has blown up since The Daily Beast first reported the discovery of the disclaimer, claiming that home technology is now "eavesdropping" on us, Samsung insists that the language in the privacy policy represents a totally benign — if not totally innocent — relationship between the company and their data-mining helpers. There is no intention of spying on people in their homes or giving away their personal information, the company says.

Here, in plain English, Samsung is warning customers that their "personal or sensitive information" will be "transmitted to a third party."

Yet here is what a Samsung spokesperson told ABC News:

Samsung does not retain voice data or sell it to third parties. If a consumer consents and uses the voice recognition feature, voice data is provided to a third party during a requested voice command search. At that time, the voice data is sent to a server, which searches for the requested content then returns the desired content to the TV.

So now we're hearing that Samsung does not keep your voice data or sell it to third parties — instead, they never have possession of the data and pass it right on to the third parties, who are not paying for the information. When a user makes a voice command, the voice data goes to a third party that transcribes your command — "Play Gilmore Girls" — and searches for what you want.

This is really a matter of nuance, but it makes the technology seem pretty innocent. Of course there must be a service to convert your voice commands into text; otherwise, how would your TV ever know what you were looking for? Despite all the advances in artificial intelligence, the television is still a machine and does not inherently understand what you're saying.

But the SmartTV's smartness, and potential to improve itself, represents a new era of artificial intelligence that some say is "troubling" and "outright scary." Theoretical physicist Stephen Hawking, whose life story is recounted in a super-emotional new movie, says thinking machines threaten the well-being of the human race.

"The development of full artificial intelligence could spell the end of the human race," Hawking told the BBC. "It would take off on its own, and re-design itself at an ever increasing rate. Humans, who are limited by slow biological evolution, couldn't compete, and would be superseded."

Hawking's warnings may come across as alarmist or ridiculous, but the scientist did produce the now widely respected Theory of Everything, so his words no doubt carry weight. Samsung's motto for the SmartTV reads, "TV has never been this smart." Should it be?