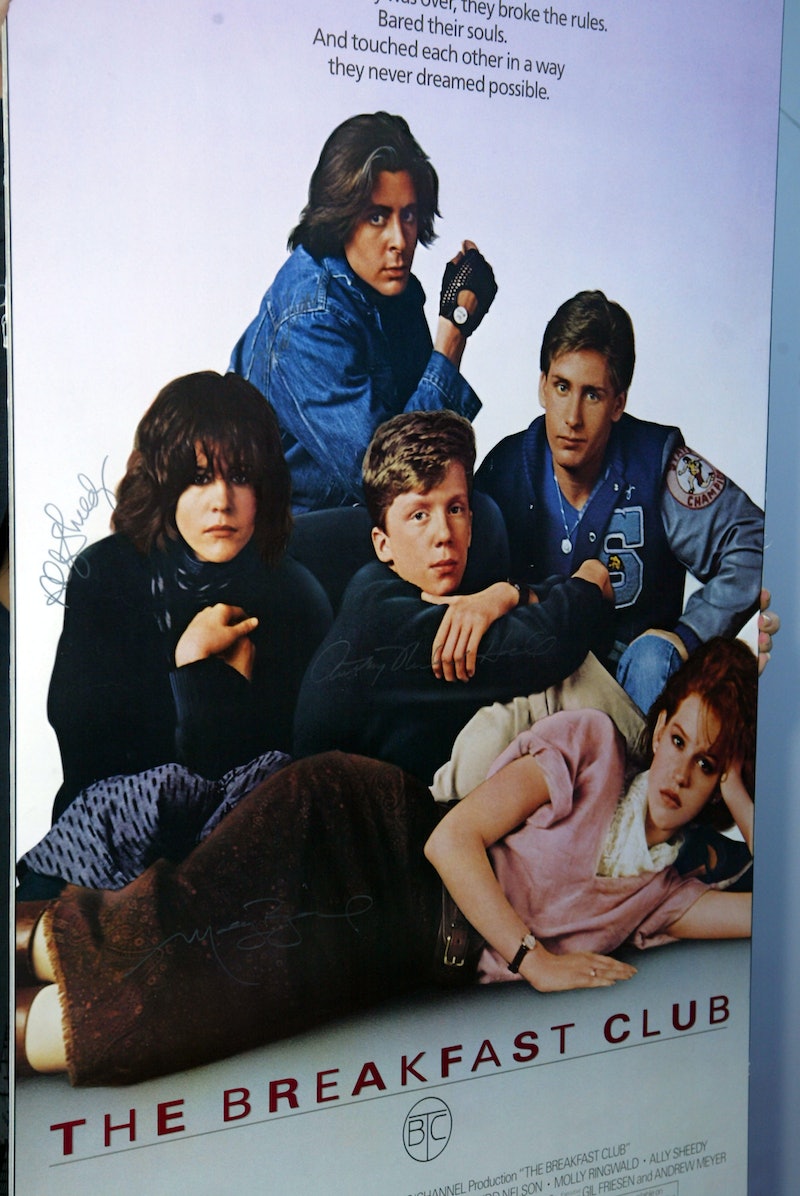 It's been thirty years since the brain, the athlete, the basket case, the princess, and the criminal were held in detention under the watchful eye of their tyrannical, Barry Manilow wardrobe-raiding principal and eventually came together as friends, in spite of their social differences. The John Hughes classic The Breakfast Club celebrates its 30th anniversary on February 15, and while the iconic teen comedy still holds up today, there are definitely some things that stick out in 2015. (And, no, we don't just mean the casting of Judd Nelson as the bad boy stud.)

The timeless comedy, heart, and message of The Breakfast Club has remained the same over the past three decades, but there are still some things that could never happen today. The times, they have a-changed since 1985, after all. ("B-o-o, h-o-o.")

As we celebrate the 30th anniversary of The Breakfast Club, we found seven major things that could never happen to Brian (Anthony Michael Hall), Andrew (Emilio Estevez), Allison (Ally Sheedy), Claire (Molly Ringwald), and Bender (Judd Nelson) in today's world. Still, we love this gang in their 1985 time capsule, which is where they will forever remain in the halls of movie history.

I wasn't in high school during the smart phone era (yes, dear readers, I am old) and I imagine they aren't allowed in schools today, especially during detention. But there's no way in hell kids still don't find a way to sneak them in, especially during detention. John Bender definitely would have snuck a phone in there to text his way out of there/look up dirty stuff on the Internet and Andrew would have written his famous essay on a tablet.

Even After Their Bonding, They'd Still Have Social Media Woes

In the 1985 happy ending of The Breakfast Club, the group of various misunderstood misfits all walk off as friends (and in some cases, lovers) instead of strangers. While it's a nice thought, if this happened in 2015, there would still be the social media aspect to consider. Would Claire really change her Facebook status to say "In a relationship" with Bender? Would Allison start following Andrew on Twitter? Friendships and means of communication are a totally different ballgame for this generation, and walking off into the sunset to the sounds of the Simple Minds' "Don't You (Forget About Me)" isn't really one of them.

What Andrew did to Larry Lester (and his poor buns) would probably be considered a hate crime. In 1985 bullying was way more tolerated than it is in 2015, and Andrew's mean and violent act would have gotten him kicked out of school for good, rather than just spend a Saturday in detention.

Claire Would Have a Lipgloss Trick, Not a Lipstick Trick

Not only that, but someone would have recorded this on their iPhone and it would go viral around the school in no time.

Their Outfits Would Take On a Whole New Identity

If they all wore their exact outfits today, we wouldn't be able to tell who was the geek or who was the criminal. In fact, they'd all be considered part of the "norm core" movement.

They Wouldn't Be Whistling the "Colonel Bogey March"

We currently live in a sad and scary world where kids today don't know who Beck is, so there's no way in hell they'd be referencing something from The Bridge on the River Kwai. If we're being totally honest with ourselves, they'd be whistling along to Flo Rida's "Whistle." :(

Okay, that couldn't have happened in 1985, either. That scene is just as ridiculous and implausible now as it was then, and we should all collectively pretend that it never happened.

More like this
12 ’90s Movie References You Missed In 'Do Revenge'
By Radhika Menon
Harry Potter's Viktor Krum Has Undergone A Huge Transformation Since Hogwarts
By Sam Ramsden and Meguire Hennes
20 Years Later, Kelly Clarkson & 'American Idol' Judges Reunite For Her Hollywood Walk Of Fame Star
By Radhika Menon
What Does Nancy Jo Sales Think Of 'The Real Bling Ring'?
By Arya Roshanian
Get Even More From Bustle — Sign Up For The Newsletter