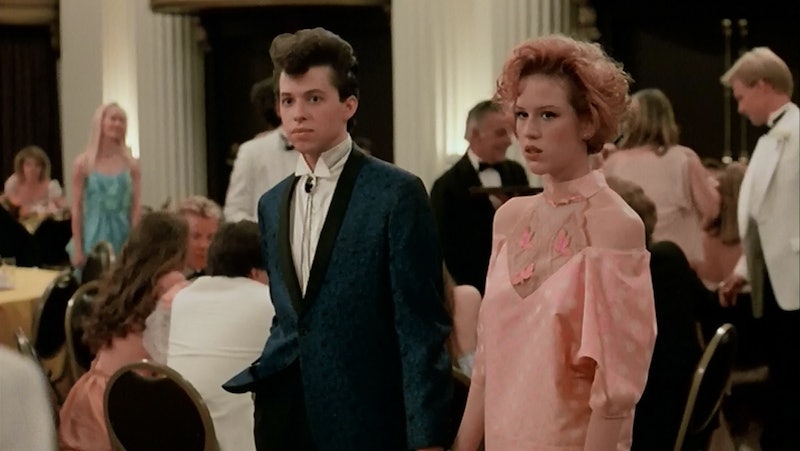 It all started the summer before I got to college. Getting ready to begin writing "the next chapter" of my life, I wanted to make sure to put across the image that I was cool. Like any impressionable 18-year-old, that meant conforming to what I thought those around me considered, at the very least, socially acceptable — a misconception that in turn led to the complete eradication of the color pink from my wardrobe. For reasons that in retrospect seem so obviously invalid, I believed wearing pink undermined not only my coolness, but my seriousness, and consequently my intelligence, as well.

Now, quick disclaimer: I chose to attend college in New York City, the land where trendiness equates to monochromatic wardrobes normally of the dark-hued variety. Perhaps things would have been different has I chosen to go to school in some place sunnier or preppier; but alas, I did not. So, my bias against pink truly solidified itself once I arrived to my first day of classes, ready to impress all the college cool kids with my fab and somewhat drab wardrobe. (Because, you know, you wear pink to the mall in New Jersey, not to a lecture in Manhattan.) If I wanted to fit in — to be taken seriously — I needed to leave pink by the wayside.

Fast forward four years and I have fully realized the sheer stupidity of this anti-pink attitude. To my credit, there are certainly arguments to be made against the color, but personally, I think the positive far outweighs the negative.

Power Of (Pink) Free Will

As I got older, my biggest beef with pink became the idea that as a woman, I was supposed to like it. I thought to love the color meant that I was just falling victim to all the constructs my sociology professor went on and on about. If I became that girl who always wore pink, who wrote with pink pens in pink notebooks, I would somehow also fulfill the stereotypes that society undeniably associates with it. For further, more comical evidence, take the following clip from talk show heroine Ellen Degeneres, who perfectly sums up the absurdity that comes with the assumptions that women only think in pink:

As a woman, I don't need a pink pen to write. I can do perfectly fine with the standard black and blue. The idea that anyone would market something to me in pastel pink just because I'm female is so incredibly frustrating, and as such, only furthers any distaste for the color.

But sometimes I do like to wear pink (or write in it) and when I do it, it's an act entirely of my own volition. And that's the key. So long as it's of my own volition, of my own propensity for color-coded organization or adding a pop of color to my wardrobe, I have absolutely zero problem with pink. The only way those negative pink stereotypes become true is if I let them.

It follows, therefore, that wearing pink can turn into something quite empowering. The argument against sporting the color because as a women, you're meant to, or because it's too feminine or too soft, certainly holds. One need only live in society to understand that pink holds connotations of girliness (see: #LikeAGirl), which in turn signify if not flat-out weakness, then a gentility that can easily get taken advantage of.

But such perceptions of girliness aren't necessarily a bad thing, especially when they are unabashedly embraced. Take, for example, the fictional but nonetheless inspiring character of Elle Woods, who refused to forego her love for pink just because some snooty Harvard-types judged her for it. Sure, she adds a bit more subtlety to her wardrobe, but Elle Woods never loses a penchant for the hue and as such, proves just how powerful a woman in pink can be.

It's an unfortunate state of the world that women — and professional women, especially — must alway remain attuned to what they wear. But even so, that doesn't mean that women shouldn't wear pink. In fact, I've come to consider it an extra show of power when women make like Elle and embrace the color. In a way that makes for complicated irony, a flash of fuchsia adds a rebellious authority to professional ensembles exactly because it is in the board room or on the Senate floor that women allegedly shouldn't wear pink. In these environments, wearing pink with an unapologetic authority breaks the rules, proving that there is indeed power in the feminine — as if that was ever really a question.

Putting aside all this speculation, the most important and strongest defense for wearing pink is a simple question: So what? So what if other people don't think it's cool? So what if other people think it's a mark of vulnerability? Whatever. To cave into those opinions would be to worse than actually living up to them. To be sure, I still believe that pink is more than just a color — its hue upholds a ton of hefty gender stereotypes that don't necessarily prove all that positive. However, there are tons of ways to wear pink without looking like a cupcake and even so, if you want to look like a pink princess, so what? The most empowering color to wear is the one you feel most comfortable in, and if that's pink, so be it.

More like this
Introducing Beauty Beat, The UK’s First Luxury Beauty Event For Women Of Colour
By Justine Knight
Here Are All 703 Outfits Rachel Wore On Friends
By Kat George
The Best Heels For Bunions, According To A Podiatrist
By Margeaux Baulch Klein and Maria Cassano
Dua Lipa On YSL Beauty, Plus Her Fearless Approach To Hair & Makeup
By Erin Stovall
Get Even More From Bustle — Sign Up For The Newsletter