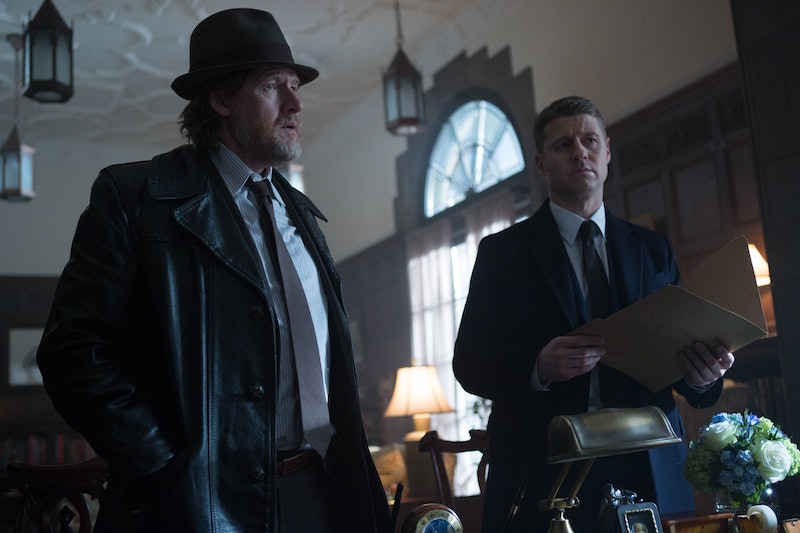 Guys. GUYS. Guys. My mind has been completely blown thanks to Monday night's episode of Gotham — or, to be more accurate, thanks to the promo that followed Monday night's episode of Gotham. Our first peek at the upcoming episode "The Blind Fortune Teller" reminded us of the old villains that we had already come to learn (excluding Poison Ivy, for some reason) and then revealed that we were about to get our first real look at the villain that everyone has been waiting for. Seriously, don't even pretend that you're not watching Gotham to find out who is going to be the Joker and when he is going to be introduced. Well, wait no longer, because the promo promises us that "The Blind Fortune Teller" will be the Joker's big debut. AND IT LOOKS EPIC.

The promo features Jim Gordon and Harvey Bullock pulling in a mysterious orange-haired man with a manic smile reminiscent of that for which the Joker is famous. He even starts cackling in that perfectly Joker-like way. So the real question at this point is whether or not that's really the Joker. From all the speculation that we've been doing to this point, Fox could be trying to trick us again. After all, the network had us guessing that everyone from Butch Gilzean to Bruce Wayne's school bully is the Joker, never confirming any of our speculation. Maybe they're pulling our legs again.

After all, just as famous as the Joker is his infamous Joker venom, a toxin which leaves its victims with the same grotesque smile that the Joker displays on their faces. Perhaps the man that Jim and Harvey are interrogating isn't the Joker, but simply a victim of the Joker venom. Maybe the true mystery of the episode will be that some random scientist is working on this new gas — and then the episode will end with that gas being stolen by a mysterious figure we never actually get more information on until the end of the season.

I mean, have we heard anything on the Snatchers since their whole episode with Selina Kyle? No. Do we know who or what the Dollmaker is from that little adventure? No. Hell, what about the big deal made about a warehouse called Indian Hill? All of these little puzzle pieces have been scattered across the season without coming together to form a full picture just yet, and the same could hold true when it comes to the identity of the Joker. Call me a cynic, but I just don't trust TV shows to give me what I want in such a neat little package like this, you guys. Isn't it a little too early for the Joker to be roaming the streets of Gotham with no Batman to stop him? How old would he be by the time Batman ages into Batman anyway? The current Bruce Wayne couldn't even walk through some woods by himself!

As excited as I am to finally see the Joker, I don't doubt that his identity will still be kept a mystery to all of us for a little while longer. The Joker is the ace in the hole of the Gotham series, so his introductory episode deserves to be huge — as in season finale level huge. "The Blind Fortune Teller" is surely going to be a big deal, but Joker-level big? I'm not convinced.