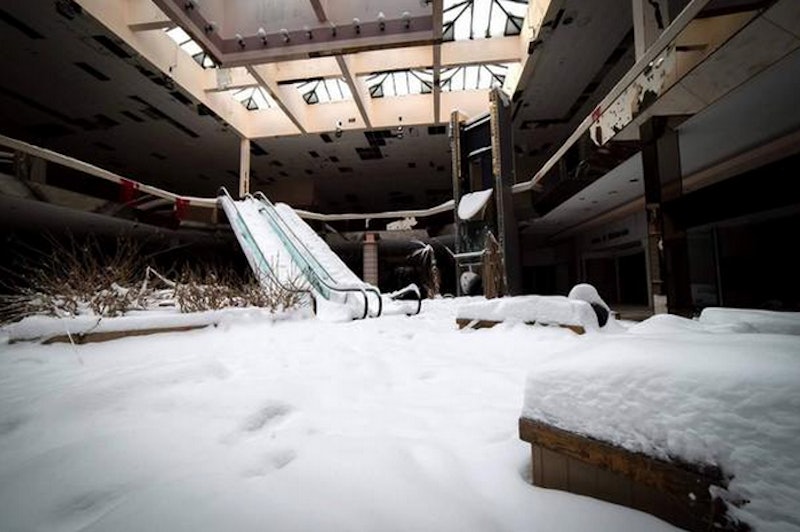 Even though it's been a few months, it would be understandable if you are still reeling in horror from the memories of trekking through your local mall during the Christmas season. Like a magnet, the more you tried to avoid it, the more it seemed to draw you in. But set aside your PTSD for a moment, because there is one mall still worth going to this winter. It's devoid of crowds and you can't buy anything and it's amazing. I'm referring to this abandoned shopping mall in Akron, Ohio that is now covered in snow. And I don't mean just the roof is covered in snow—the entire interior of what used to be a sprawling mall-tropolis similar to the very one you have nightmares about is now its own mini-winter wonderland.

I have several theories as to how this happened, but here are the only legitimate ones: Either this is secretly the North Pole where all the mall Santas congregate in the dark of night, or someone seriously pissed Elsa off on a day trip to Akron. Clearly, neither of those is true: Rolling Acres Mall shut down in 2008, where it remained all but forgotten until recently, when photographer Seph Lawless captured the striking photos of the space after the snowfall.

As much as I love to shop (god help my debit card), even I have to say that I would prefer an epic indoor snowball fight to anything JC Penney or Sears has to offer, which were the two anchor stores that happened to be the last to shut down after the closure a few years ago. Just look at all this prime snowy hide-and-seek space: