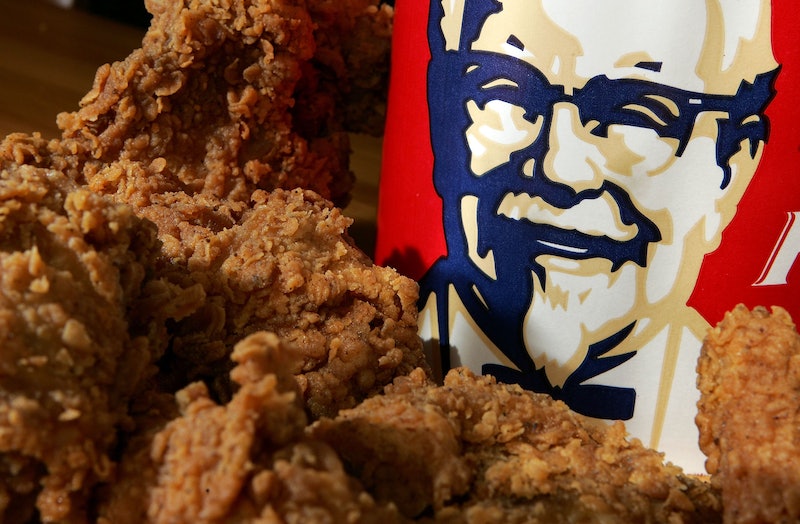 I imagine that February is every fast food restaurant's dream month. By February, we've all long since derailed our New Year's resolutions and given in to the drive-thru demons that have been whispering in our ears since the ball dropped at midnight. By this time in the year, most of us have succumbed to the calling of fast food, which we just shrug off as a minor failure, and life goes on as it did the year before. If only that were the case for this poor teen who found a chicken brain in his KFC chicken meal. A trip to the ol' fast food joint didn't lead to life going on as it did before. In fact, if I were this kid, my life would likely never be the same.

Props where props are due: Manuel Cobarubies, a high school student in Stockton, California, is way more chill about this than I could ever imagine being. Whereas most of us would be beating down KFC's doors and exercising our favorite American pastime of suing a fast food chain's asses off, Cobarubies merely threw the chicken brain away and sent a tweet in KFC's direction asking for his four dollars back. Like most teens, he's on a budget, and only ended up at KFC because he was strapped for time.

"Just because I do eat there often so I mean coming across something like that is just like wow," he said in a statement to Fox40 news. "Like wow" is a lot more generous than the things I would have been spewing.

We can't say anybody is too surprised by this turn of events; this is the same franchise that gave a 7-year-old boy a deep-fried towel last year. To KFC's credit, they did address the tweet with an apology, said they would monitor the cooking more closely, and promising to refund his four dollars (which I hope, for his sake, he decides to spend somewhere else). "I’m probably just going to have to start packing my own meals, making my own sandwiches," says Cobarubies. When you take a look at what he found it'll be hard to blame him.