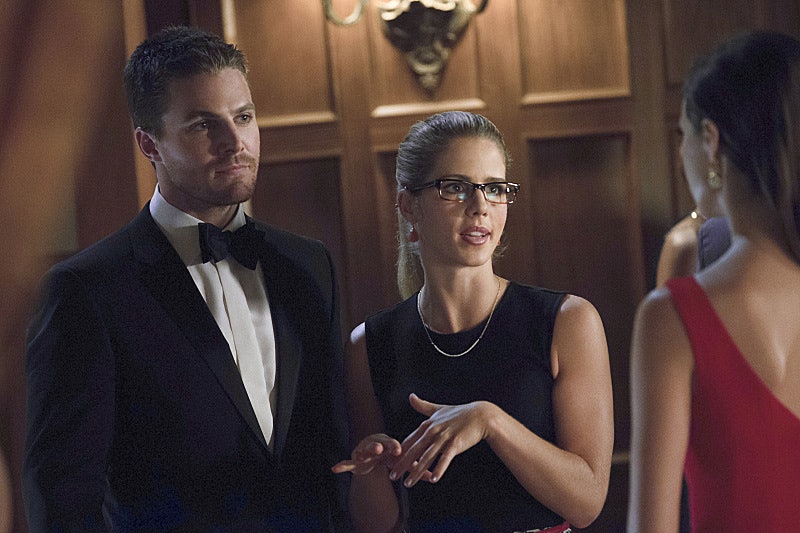 Remember last summer when we were all so excited to see Oliver and Felicity go on their very first date? That now feels like a very distant memory considering where our not-so-dynamic duo left things last week. Just in case some of you opted to block the memory out (and believe me, I wouldn't blame you), Arrow fans watched in horror as Felicity revealed to Oliver that she doesn't want to be loved by a man who could align himself with the likes of Malcolm Merlyn, successfully putting up yet another huge roadblock in any possible Olicity reunion. But surely there still has to be some chance of Oliver and Felicity getting together on Arrow Season 3, right? Unfortunately, it seems any remaining glimmer of hope for that relationship won't be explored in the near future.

TVLine recently spoke with Arrow showrunner Marc Guggenheim, who confirmed that these two star-crossed lovers won't be mending fences (romantically at least) anytime soon. But on the plus side? Felicity will still remain a core member of Team Arrow. "She’s still with the team," Guggenheim assured the site. "She’s not going anywhere, but she’s made it very clear that a romance with Oliver is off the table." So there's our silver lining… I guess? He also goes on to further twist that Olicity knife by saying that our beloved Miss Smoak has "moved on romantically," which seems to further indicate that her attention will be turned to our Atom-in-training, Ray Palmer.

I'm not going to lie, this isn't the greatest news in the world. Speaking as a huge Olicity supporter, I can't help but feel extremely disappointed. I mean, their relationship ended before it really even had a chance to begin. Not to mention that the amount of kissing between these two was at a bare minimum. Of course, there's still always a chance that their relationship could heat back up down the line (everyone loves a slow burn, after all), but as far as the here and now goes, that flame has momentarily flickered out.

But before we go tumbling down the rabbit hole of depression, let's try to look at this setback in a positive light. Here are all the good things that can come from a (hopefully) temporary Olicity-less world.

Not that I necessarily prefer this relationship over one with Oliver, however, I'd be lying if I said this 'shipping pair didn't hold some appeal. Brandon Routh has proven to be extremely charming in this role and I love that he holds Felicity in such high regard, always praising her mind as well as her inner and outer beauty. I wouldn't mind exploring this romance a little further.

By the same token, Felicity has proven that she doesn't need a man to stand on her own two feet. In fact, she's had some pretty kick-ass moments this season without the help of any vigilante. It'd be great to see her continue down this road now that her romantic feelings for Oliver are being put on the backburner. She's become a more powerful influence on Team Arrow while our hooded hero was away, so here's hoping she'll continue to stand up and take on more of a leadership role.

This whole ordeal is bound to make Oliver even more stressed than usual. And what better way is there to vent than a shirtless workout on the salmon ladder? We're here for you, Ollie. Take as much time on that thing as you need.