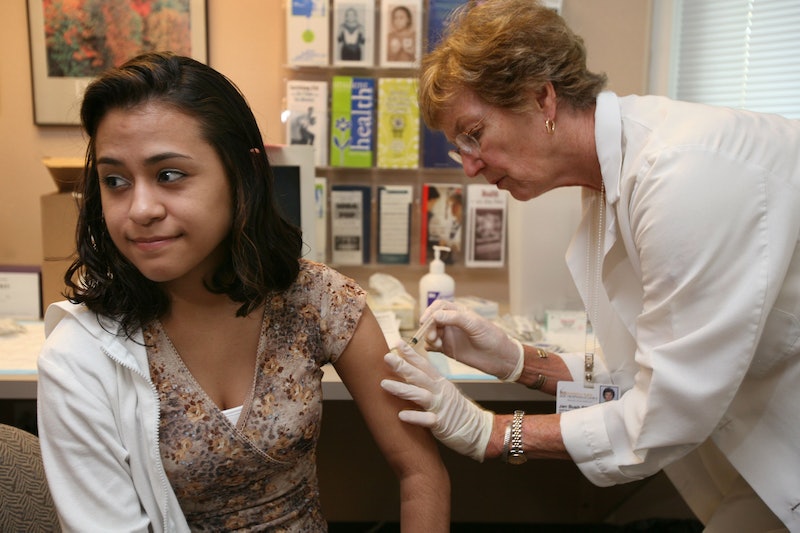 The current measles outbreak has left health officials scrambling to dispel the myths that anti-vaxxers have espoused. More than a third of California's measles cases have been traced back to Disneyland, where the outbreak is believed to have started. Besides affecting a number of children who attended the theme park, the epidemic also infected several Disneyland workers, and the company has urged its employees to get vaccinated. But it raises another question — can employers require their staff to be vaccinated?

When measles hit the park back in December, Disney asked workers who came into possible contact with the disease not to return to work until they showed proof of immunity, and also offered tests and shots on-site for employees who were unvaccinated. But the company didn't make routine vaccinations a requirement for employment, reported Bloomberg — a policy in line with other businesses whose employees encounter potentially contagious travelers but don't mandate immunization.

Generally, employers cannot make staff get vaccinations, as federal and state laws limit their ability to do so. But the rule does not apply to those in the healthcare industry, where it's prudent — even a no-brainer, really — for workers to get immunized, having to deal with sickly patients on the daily.

According to NPR, the risk that a non-immunized worker in a hospital poses to patients is so high that every nursing and medical school requires students to be vaccinated before beginning training. Several states also require that hospitals offer vaccines to incoming employees or make sure they are vaccinated before they start work — but exemptions apply to those with disabilities or religious objections.

At the other end of the spectrum, if an employee works outside the health care or service industries — or any office environment that doesn't present the same kind of risks — Dr. Arthur Reingold, a professor of epidemiology at the School of Public Health at the University of California, Berkeley, told NPR:

If you work at Google, what business is it of your employer to tell you what vaccines you should have had? You're not at greater risk because you work at Google of getting measles than you are in the general population.

As for Disney workers, Gilberto Chávez, Deputy Director of the California's Center for Infectious Diseases, told Bloomberg that the company has been cooperating with public health officials regarding the outbreak and potentially-infected employees. He said that Disney — unlike some prominent anti-vaxxers, I might add — felt it was partly responsible for containing the disease:

Disney recognized that they were just a meeting place for measles. And they are quite concerned about doing what they can to help control the outbreak.