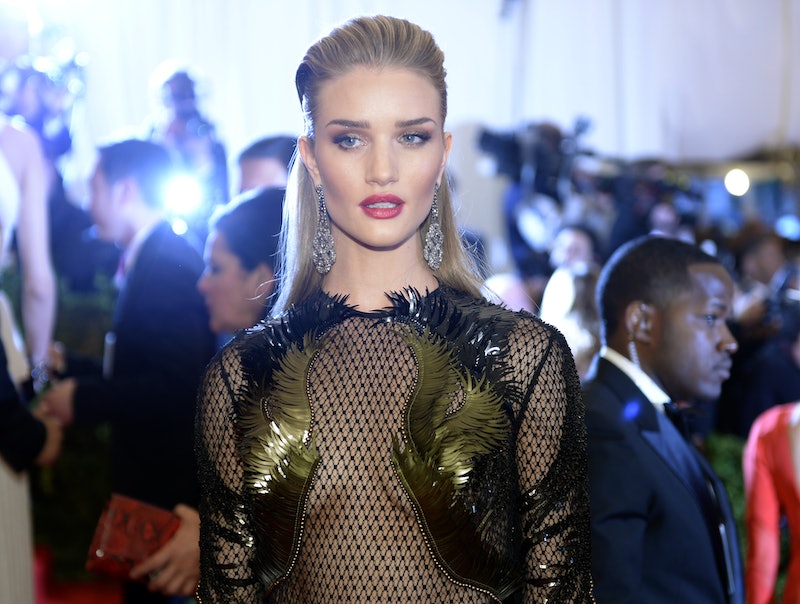 Hate to break it to you haters out there, but the lob/bob trend is still alive and kicking. And here's evidence: Rosie Huntington-Whiteley cut her hair even shorter, which doesn't seem like a huge deal considering she just chopped her locks off about a month ago, but it's actually significant because Whiteley's taken her lob to the next level — a bob.

Whiteley has been rocking her lob for a little over a month now, but apparently, the transformation wasn't enough because her hairstylist, George Northwood, instagrammed Rosie's new cut, showing that the model has snipped a few more inches off into a full-fledged bob.

Though most stylists I've been to will try and talk you out of it (they like to go for the shock effect, apparently), cutting your hair in stages is really a thing. I mean, you have to have some serious guts to go from mermaid-length hair to a chin-level crop in an hour, so perhaps the British model is slowly transitioning into a new shorter 'do. She's tried the lob, now the bob, so the next logical step would be a pixie. I think we can all agree — Rosie totally has the bone structure for that one.

But regardless of what's coming (or not coming) next, the 27-year-old looks gorgeous. Although maybe she should retire her nightgown slip dresses and stick to the plain gray tee's for awhile. Just a thought...

More like this
Tati Gabrielle Relives Her Best Hairstyle Moments
By Olivia Rose Ferreiro
Halsey Debuted A Copper Pixie Haircut, & It's Such A Fall Vibe
By Olivia Rose Ferreiro
The Chicest ’90s Updo Hairstyles To Try
By Paris Giles
Lily Collins Got Shaggy Curtain Bangs For Emily In Paris Season 3
By Audrey Noble
Get Even More From Bustle — Sign Up For The Newsletter