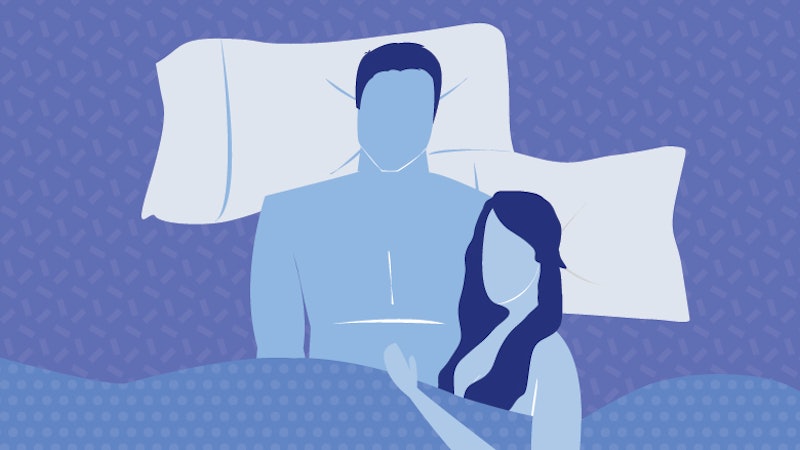 When it comes to sex, it's not uncommon for there to be a height difference between partners. But how do you have sex when one partner is substantially taller or shorter than the other? At five feet tall, I'm rather diminutive; all of my partners have been much, much taller than I am, which at times can present some unique challenges. I'm sure I'm not the only person in this metaphorical boat, though, so in the interest of bonding with everyone who's floating along here with me, here — let's talk about some tips that will make sex between people of dramatically different heights easier.

To be honest, it's not actually that difficult to adapt your sexytime activities when one of you is really short or really tall; most of the best “tips” I've discovered are usually important for good sex in general, not just good sex between partners of different heights. That said, though, you do sometimes have to get a little creative. But hey, if variety is the spice of life? Well, let's just say that it'll definitely add that certain je ne sais quoi to sex.

It's also worth noting before we begin that this isn't a hard and fast list of do's and dont's; they're suggestions only. Furthermore, since they're based on my own experiences, I can only speak to heterosexual pairings. Even taking those specifics into account, though, I'm pretty sure most of the tips mentioned here can be adapted across a wide spectrum of bedroom activities. They're open to interpretation; tweak them however you need to in order to suit your own situation. Or go ahead and disregard them altogether if none of them work for you. Totally your call.

Bearing all that in mind, then, let's get started, shall we? Grab your bed wedge and let's get cracking!

This is true of all sets of partners, but experimentation is really the best way to go about figuring out what works for you and what doesn't. It's also obviously going to vary from person to person; some things I personally find difficult — 69-type positions, for example (my torso is just too short to make them work) — might not give other shorties the same problems. Good sex is always about learning by doing, and it's doubly so here.

Again, clear communication is usually a hallmark of good sex in general; when you and your partner are of dramatically different sizes, though, it's even more important to make sure you're on your communication game. I often find that certain angles that might work for taller women hit me in extremely odd and uncomfortable places; as long as I'm upfront about it, though, my partners have always been happy to shift until we find something that works better.

3. Maintain a sense of humor.

Awkward shit is going to happen. Someone will bonk their head on something unusual at some point. There's no need to get embarrassed or let it ruin the mood, though; being able to laugh about the goofy stuff is often the sexiest thing there is.

4. Invest in a wedge pillow.

The Liberator Wedge is specifically designed to be used during sex; you can also get a plain ol' bed wedge pillow, though, which tends to be a heck of a lot cheaper (just make sure it's a firm one!). The end effect of both is the same: It helps make positions that might otherwise be difficult to pull off significantly easier. Doggy-style, for example? Hard to enjoy when one partner's hips are lower than the other's. It's much more fun with something helping either to raise one partner's hips or give their knees a bit of a boost, though — and easier to sustain with the added support throughout.

5. Sitting sex is your friend.

Do you have a good couch or a bed with a headboard? If yes, take advantage of the opportunities these magical pieces of furniture afford you. With one partner straddling the other in a sitting position, it doesn't matter how tall either of you are.

Although missionary is often described as the default sex position, I actually think it should be spooning. As far as I know, it works for just about everyone — all you need is a large enough surface to have it on.

7. The smaller person doesn't always have to be on top.

Beyonce has probably never been taken this literally before. Anyhoo, to the point: Although some of the positions that work the best between partner with a prominent difference in height involve the taller person being on the bottom, it's by no means a hard and fast rule. Combine this one with tip number one and see what works best for you, even if it is plain ol' missionary.

8. Regarding sex standing up:

Unless the taller partner is strong enough to hold up the smaller one the entire time, you'll probably need some help for this one. A step stool may not sound like the sexiest thing on the planet, but if you really want to have standing-up-against-the-wall sex, having one on hand for the shorter partner will go a long way towards making it easier. You could also look into acquiring a sex swing. Get creative.

You might want to pass on it. It has all the difficulties of sex standing up, plus the added hazards of water and slippery tiles. Other aquatic activities, however, are definitely doable, particularly if you have a roomy tub to do them in. Make sure you choose your playing field wisely, though; having sex in water can cause yeast infections, depending on what other microscopic organisms might be enjoying a little splashy-splashy as well.

10. Remember that there's more to sex than just P-in-V.

As far as heterosexual bedroom activities go, we've all sort of been trained to think that actual penis-in-vagina intercourse is the Main Event, with an orgasm or two being the coup de grace. But you know what? It doesn't have to be. There's plenty of fun to be had without it — and there's often much greater flexibility, as well. And don't think this is something only differently-sized partners would do well to remember; it's useful for everyone. Make use of your hands, your mouths, toys, edible body paint — anything goes. There are no rules beyond these two: Make sure everything is consensual, and have fun while you're doing it. Otherwise? Go nuts. Everybody deserves to have awesome sex.