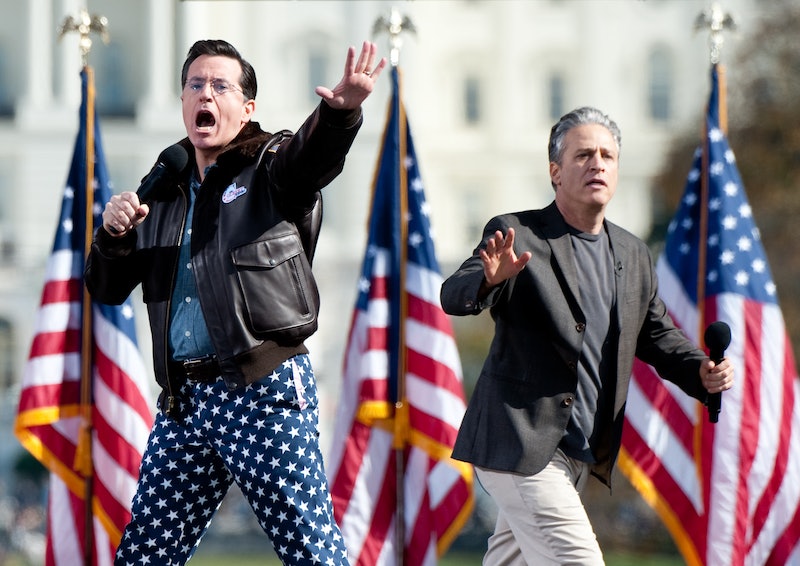 Why must they hurt us in this way? I understand that both Jon Stewart and Stephen Colbert have been with Comedy Central for over a decade — and that the promise of new, even shinier jobs glitter on the horizon. But damn, The Colbert Report is over and Jon Stewart is leaving The Daily Show and I am so sad about it. I know that I'm not the only one, too, because I have a Twitter and right now my feed is about 70 percent jokes about who might replace him (Mario Lopez? Bill O'Reilly?) and 30 percent weeping.

This is a hectic time to be a politically-engaged comedy fan. John Oliver is killing it on HBO with Last Week Tonight, proving that this genre has legs beyond the men who breathed life into it. I'm pretty proud of what Oliver's doing, as if I personally discovered him and nurtured his talent and helped him get to where he is today. But I'm also pretty devastated, because even though in a lot of ways it's not the end of an era — the era's living on in Oliver, Larry Wilmore, and whoever takes over for Stewart (Samantha Bee? Jessica Williams?) — it feels like the end of an era, you know? At the very least it feels like the end of a generation of television. As for the generation Stewart hit the most:

Basically, I'm having a lot of emotions. A lot of us are. Here are some of the emotional stages of realizing both Colbert and Stewart have abandoned the roots that changed the landscape of how we engaged with our politics and culture.

"Jon Stewart Departing The Daily Show" — Did I read that right? That can't be right! He can't be leaving us!

"Nah, none of this is confirmed yet, I'm sure this will turn out to be an unsubstantiated report."

"Holy crap, this is actually happening."

They've just done so much for our world...

Colbert AND Stewart? FOR REAL, WORLD?

THEY AREN'T BOTH ALLOWED TO DO THIS TO US. WITHIN THE SAME CALENDAR YEAR?

Remember when he took over from Craig Kilborn and no one thought he could pull it off? Remember how Jon Stewart's an icon now? Remember how "Stephen Colbert" became one of the best TV characters of all time? Their legacy will be felt forever! FOREVER. *Storms stage like Kanye*

Yeah, we've had some good times.

John Oliver did a pretty great job as fill-in-host that one summer. He's off on his own show now, but Jessica Williams and Samantha Bee are perfectly great options...

Everyone deserves the chance to make their own decisions about the direction of their life. Their tenure on their shows may be ending, but it's hardly like Colbert and Stewart are dying — Colbert's moving to The Late Show and I have complete faith that Stewart has a lot of really impressive plans for what to do with that big, engaging brain of his. There's a lot more to come.

(Shhhh, love-pile is definitely an emotion.)