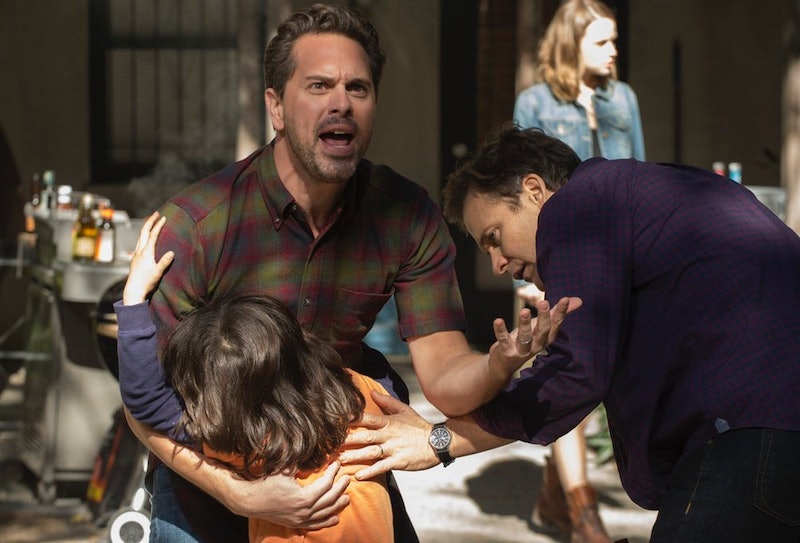 When the entire premise of a TV show revolves around a grown adult slapping a young child across the face, you know that show is going to raise a lot of tough questions. This is the case in NBC's newest drama The Slap , based on a 2011 Australian series of the same name. The eight episode mini-series, which stars such big names as Peter Sarsgaard, Zachary Quinto, Uma Thurman, Brian Cox, Thandie Newton, and Penn Badgley, centers around a backyard BBQ that goes horribly wrong when a hot-tempered man (Quinto) takes it upon himself to punish another couple's child for misbehaving.The series follows the legal and emotional fallouts of such a brazen act, and is sure to raise many tough questions about parenting, abuse, and the complicated relationships between adults and children. But the most pressing question on many people's minds coming out of that first episode will likely be: Is it actually illegal to slap a child in the U.S.?

All corporal punishment of children by adults (parents or otherwise) is banned in 43 out of 196 countries in the world, including most of Europe and South America, according to the Initiative to End All Corporal Punishment of Children. The United States is embarrassingly not on that list — but it's far from alone. Other notable nations on the list of where corporal punishment of children is still allowed include the United Kingdom, South Africa, Canada, and Australia.

While bans against the corporal punishment of children have been proposed in individual states (like Massachusetts and California according to ABC News), none have yet managed to become law. The line between corporal punishment and physical abuse can be blurry, but the general agreement in all 50 states is that it is always acceptable for a parent or legal guardian to open-hand slap or spank their own child. Further restrictions, such as whether or not it's legal to punch with a closed fist or hit them with an implement other than a hand vary state-by-state. (In Oklahoma, for example, it's still legal to whip your child with a switch provided you only use "ordinary force," according to TIME.)

The laws rearding corporal punishment of children are similar in Australia (where The Slap originated, originally published as a novel in 2008 by author Christos Tsiolkas), if even a bit less strict. Although individual states such as Tasmania, New South Wales, and Victoria have stricter regulations than others, it is generally still legal in Australia for parents to hit their kids with implements and for teachers to strike students... provided none of these punishments leave any marks (bleeding or bruising), according to the Australian Institute of Family Studies.

The laws regarding corporal punishment of children in the United States are not likely to change anytime soon. According to a Harris poll conducted in 2013, nine out of 10 American adults were spanked as children, two-thirds of parents have spanked their own children, and four out of five Americans still believe the corporal punishment of children is appropriate. So while it's not only legal but widely acceptable in the U.S. to slap your own child, the issue obviously becomes more complicated when you slap someone else's child. And that's the whole point of The Slap. "Whose side are you on?" NBC asks in The Slap promos. You'll have to decide for yourself when The Slap premieres this Thursday night.