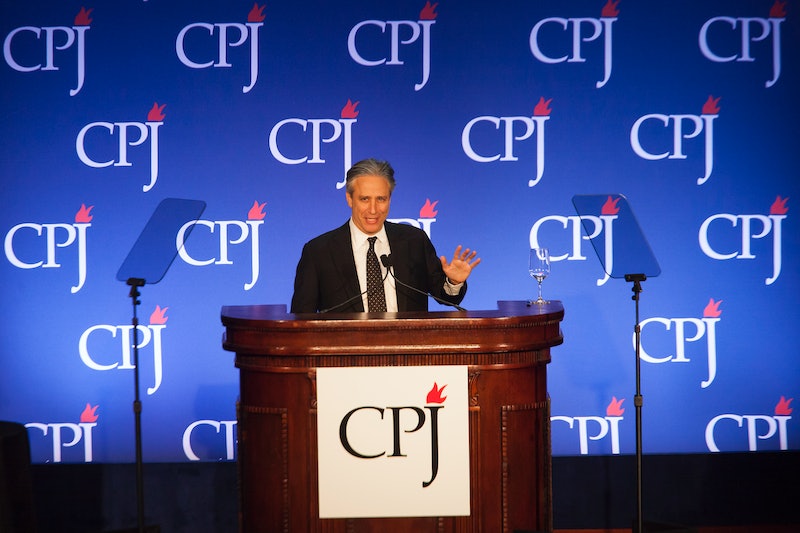 Comedy Central network executives confirmed on Tuesday night that longtime The Daily Show host Jon Stewart would be stepping down later this year, prompting a flurry of questions. Would he be replacing Brian Williams? Was he off to start a career in minor league baseball? Would he pursue his dream of becoming a WWE Superstar? No one knew. And while the majority of Stewart queries were silly and generally made in jest, one looming question still sat at the back of our minds. Is Jon Stewart about to (legitimately) break into politics?

It wouldn't exactly be a bad move. The comedian-turned-political commentator has already changed the face of politics over the last 16 years: From his "Rally to Restore Sanity and/or Fear" back in 2010, to his fiery and emotional monologue on police brutality following the death of Staten Island father and store owner Eric Garner, Stewart has never been one to shy away from sensitive topics or from holding both sides of the political aisle accountable for their actions. Just this past December, Stewart lambasted Congressional Democrats and Republicans for slipping last-minute items like a Citigroup derivatives rule and the decimation of a campaign contributions cap to the $1.1 trillion spending bill, dubbing the move sneaky and undemocratic.

"It's democracy in the same way Cheez Whiz is cheese," he joked.

Delving into Congressional technicalities isn't the only area in which Stewart has shown prowess either: Recently, he tried his hand at film-making with the 2014 docu-drama Rosewater, bringing to life the story of Maziar Bahari, an Iranian-Canadian Newsweek journalist and Stewart's personal friend, who was detained and imprisoned for being a Western "spy" for 118 days during the 2009 Iranian presidential election. Critics called the film "simplistic" — the topic of Iran was old and tired. In an interview with Salon, Stewart maintained that, though the movie was a bit reductive and meant to appease Western viewers in a non-confrontational way, the themes within were still extremely important. When the interviewer pointed out the perceived irony of a film about the confinement and torture of alleged "spies" in other countries when the United States had done the same in recent years, Stewart clarified,

No question. And a country that holds people in solitary confinement. And puts inordinate amount of pressure on journalists to write stories that they want, as opposed to the stories that they fear. ... The intention is to show the unsustainability of these types of apparatuses that are built within states to suppress their people and information, the idea being that the damage that is done to the state and to the people, from the building and sustaining and maintaining of these apparatuses, is far greater than any damage that could have been done by a piece of information that could come out. And that it’s a projection not of strength but of weakness.

On Monday night, Stewart addressed the Brian Williams controversy, arguing that while Williams had made an egregious error, the very media organizations currently putting him through the ringer weren't exactly innocent themselves. After playing a list of clips from networks like CNN and Fox News, Stewart half-jokingly pointed out the media hypocrisy in sacrificing a single journalist for what he believed was a widespread effort:

The media is on it! Now, this may seem like overkill but not for me. No, it’s not overkill because I am happy finally someone is being held to account for misleading America about the Iraq war. It might not necessarily be the first person you’d want held accountable on that list but never again will Brian Williams mislead a nation about being shot at in a war we probably wouldn’t have ended up in if we had applied this level of scrutiny to the actual [expletive] war.

Stewart already has legions of supporters ready to back him. He has a proven track record of hammering home important issues with a working knowledge of the subjects at hand while remaining largely relatable — something that many in the political sphere don't seem able to understand themselves. It might be a stretch, but if he decides to jump in the ring, Stewart might just be the political leader we've all been waiting for.