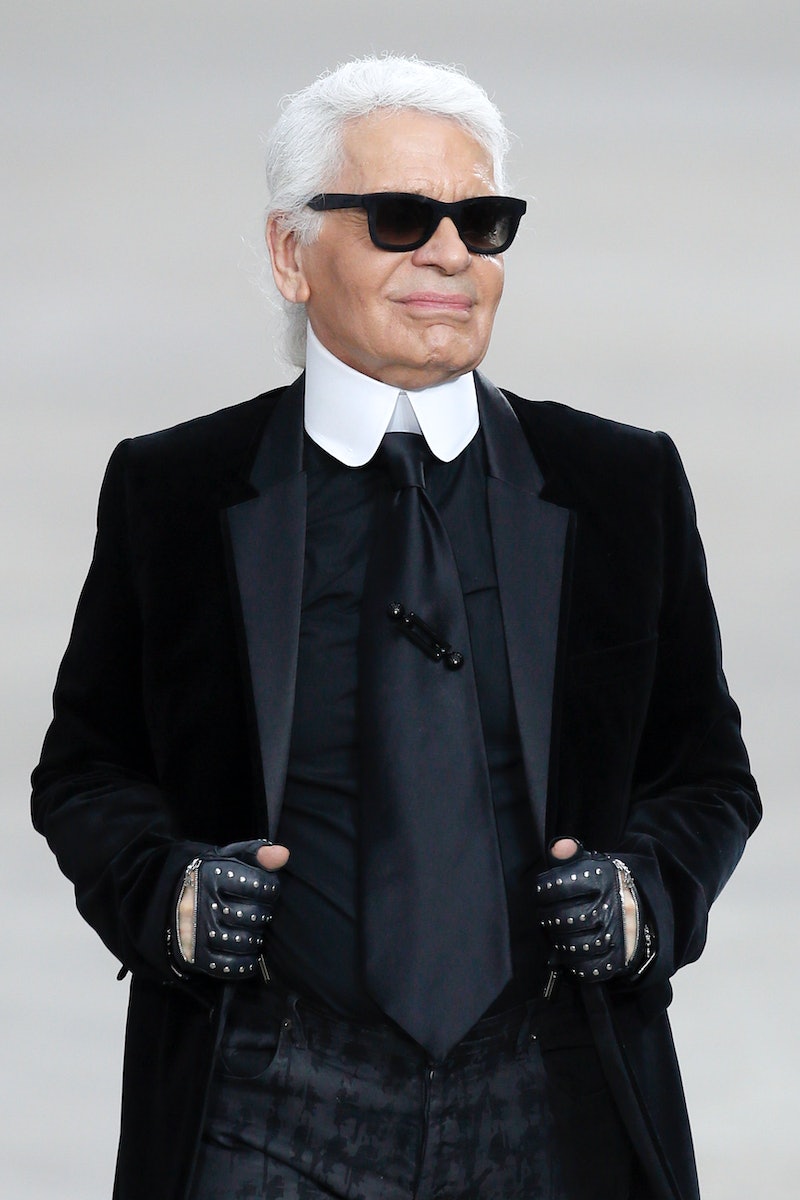 Usually, it's a smiling, gurgling baby nestled in the arms of its mommy on the subway or in front of me in line at Target that kicks my maternal instinct into high gear or that causes me hear the faintest tick of the biological clock. But this news made me want to full-on procreate! Karl Lagerfeld is launching a kids' line that will dress everyone from newborns to teens. I was already stoked about the Choupette capsule that the silver fox is doing this spring. But this — this is exciting and somewhat surprising news.

Lagerfeld is the head honcho at Chanel and he is infinitely stylish. But the fact that he will be trying his leather fingerless glove-covered hand at youth apparel is thrilling to me. I'm really not going to run out and get preggers just so I can dress my kid in Lagerfeld designs, obviously, although the notion is fun. But I would totally shop the collection for any baby showers I am forced to attend in the near future.

What's seems so unusual here is that Lagerfeld isn't normally viewed as particularly warm and fuzzy, but his coldness is something of a myth. WWD reported that Lagerfeld does have a godson, Hudson, whose father Brad Kroenig is a Lagerfeld muse. The designer also views model Baptiste Giabiconi as a muse, but he has said that he is glad there are no blood ties and that he chooses to be close with them.

The designer has said that he appreciates the DNA distance and likes caring about them but not having to deal with icky or forced family entanglements. About his "extended" family, Lagerfeld said, "I see them like family. I have no family at all, so it’s good to have, like, sons but without the unpleasant problems sons can create. It’s a choice; it’s not an obligation. There's a big difference. I have a sister in America who I haven't seen for 40 years. Her children never even send me a Christmas card."

It sounds like blood isn't thicker than water for him, but that doesn't mean there aren't people he values like family. Still, statements like that might make you go "Hmm…" about his decision to enter the kids' market. But hey, you don't have to have kids of your own to know what looks stylish or appropriate on kids. Lagerfeld isn't female, but he sure knows how to dress the female form, so…

Here's everything we know about the line so far, besides the fact that there is no way it can't be the greatest thing since sliced bread for anyone under 16.

1. We Have to Wait Awhile

Spring 2016 is the projected launch for the range.

And that theme is rock and roll! How cool! Lagerfeld president Pier Paolo Righi has said that this new venture is both a "natural fit" and that it shows the brand's "cool, ironic" side.

It will cover kids from newborn age to 16, and it's designed for boys and girls. The brand hopes to create two seasonal collections per year.

4. It Won't Be Coming Stateside Right Away

Korea, Europe, and The Middle East are the key launch markets. Bummer for us in the U.S., but hopefully the line will come Stateside eventually.

So there is plenty of time before Karl Lagerfeld and kids is upon us, but we can still be super stoked about it.