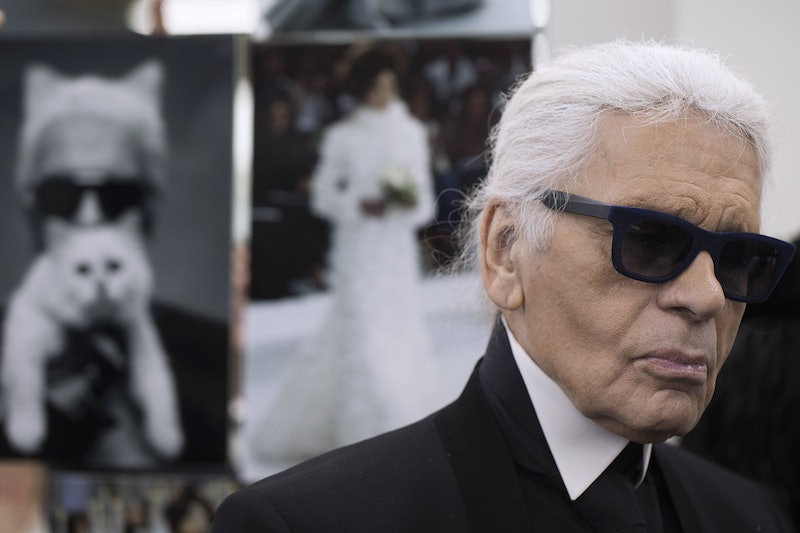 Karl Lagerfeld's cat Choupette is as identifiable as the Chanel designer himself. In fact, the creature is likely the world's most fashionable feline. Choupette, with her fluffy, luxurious white fur, is as familiar as Lagerfeld's fingerless leather gloves and his white hot hair. She was the face of a shu uemura makeup collection last year, as well as two lines of Karl Lagerfeld accessories, and the kitty was merely scratching the surface of her fame. Choupette will be the face of another capsule collection, this time involving clothes. I know, try saying that five times… and fast!

According to WWD, the 'Feld invited French cartoonist Tiffany Cooper to draw images of himself and his beloved feline. Those cartoons will now be featured in a Spring/Summer 2015 capsule collection that will debut at Colette in Paris on April 1 and at Lagerfeld boutiques by April 4. Anyone else want to bet that notorious cat lady Taylor Swift will be shopping these pieces? I use the term "cat lady" lovingly, of course.

The cartoon images will be featured on apparel and accessories. Karl in kartoon form is adorbs enough to elicit an "OMFG" reaction, and the same can be said for Choupette, whose name translates to "sweetie." That makes sense, since she resides in the sweet spot of fashion, tucked under Lagerfeld's black-cloaked arm.

Cat couture and cat fashion is hardly new, from fuzzy angora sweaters that mimic fur to sequined crop tops featuring cat faces. And dressing like one's cat is considered the new twinning, but Karl and Choup seem beyond all that. They're both way sophisto.