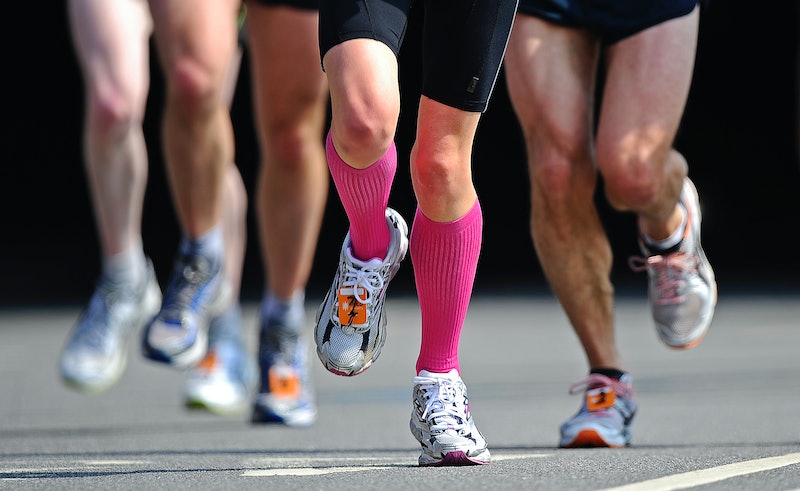 I've never bothered to track my workouts, but if I suddenly decide to start, at least I'll already have everything I need to do it: According to a new study, free fitness smartphone apps are just as good as expensive fitness trackers. So much for needing to save up for a Fitbit!

The study, which was published on Tuesday in the Journal of the American Medical Association (JAMA for short), used a relatively small sample size — 14 students at the University of Pennsylvania — but the results are still compelling. Researchers had the students walk treadmill sets at three miles per hour for both 500 and 1,500 steps; furthermore the students completed the trial twice while decked out in a huge variety of fitness trackers: Two smartphones — an iPhone 5S and a Galaxy S4 — three wearable devices strapped to their wrists, and three pedometers attached to their belts (it's a good thing fitness trackers are lightweight, right? That's a lot of tech!).

Guess what the researchers found? All the options worked fine, with only a few exceptions: Nike's Fuelband, which counted as much as 20 percent fewer steps (whoops) and the iPhone 5's Moves app, which sometimes counted more steps. Generally, though, the consensus of the researchers is that they'll all get the job done, regardless as to whether they're free apps or pricey devices. Said study co-author Dr. Mitesh Patel to the Los Angeles Times, “I think the takeaway was that they're all pretty accurate. With the exception of one wearable device that was 20 percent lower than average, the rest of them were all pretty close to the mean. We think for the purposes of the average person who just wants to track their steps, all of these, for the most part, will do.”

Given that a previous study has shown that wearable fitness trackers tend to lose their appeal after about six months for a lot of users, it might be better to save your money. These five fitness apps are free if you already have a smartphone, so why not start there? You can always upgrade later if you feel compelled to.

According to PC Mag, Argus is one of the best “gateway” fitness apps there is. It won't track calories, but it will count your steps, the number of miles you've gone, whether you were running vs. walking, and so on and so forth. You can also use it to keep track of things like how much water and coffee you've drunk and how well you're sleeping. It's only available on Apple devices, but if you've got an iPhone, it might be worth a download.

If you want something even simpler, though, give Runtastic Pedometer a shot. It doesn't have many bells and whistles, but it's pretty much a download-and-go app — perfect for those who just want something to track their steps. As a bonus, the app will also arrange all the data it gathers into easy-to-look-at graphs.

Moves is often touted as one of the best all-round trackers out there. According to Lifehacker, it even automatically tells the difference between a car ride or a bike ride. How's that for smart? It might not give you things like heart rate or speed, but sometimes those kinds of details aren't necessary; you'll still know how good your workout is based on the data it compiles.

Like to think of your workouts like a game? Fitocracy is right up your ally. The community-based nature of the app inspires friendly competition, which a lot of people find helps keep them on track with their workout goals (hi there, workout buddies!). It's also known for its wide variety of resources for every kind of fitness fanatic.

OK, so technically I'm cheating here — The Walk is $2.99, not free — but I think a couple of bucks are worth sacrificing for an app this unique. As it counts your steps, a thrilling story unfolds. Here's how it describes itself:

“A bomb explodes in Inverness station, and you're given a package that could save the world. To stay alive, you'll need to walk the length of the UK.

"The Walk is more than just a (great) pedometer — it's a way to turn walking into a journey, a challenge, and a rip-roaring adventure.”