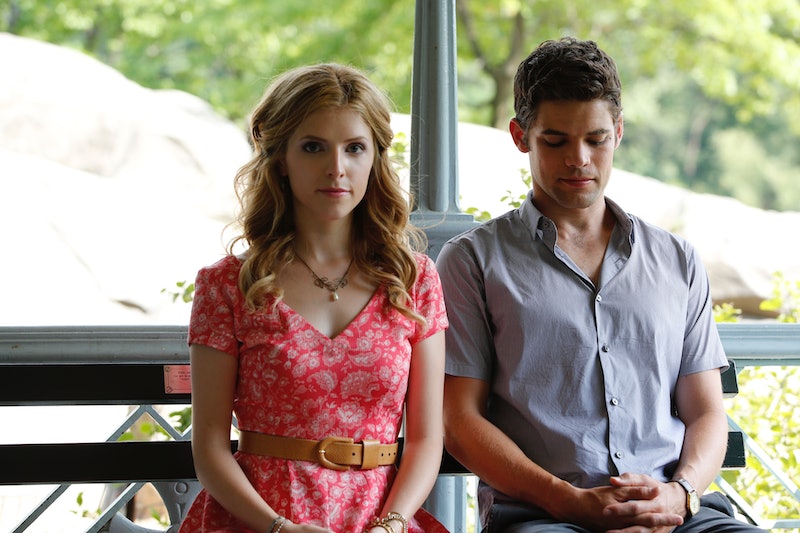 When you see Anna Kendrick's musical movie The Last Five Years , you'll probably leave with a lot of questions. The adaptation of the 2002 off-Broadway musical follows a relationship from beginning to end from both of the character's perspectives — Jamie (Jeremy Jordan), the up-and-coming author husband, and Cathy (Kendrick), his struggling actress wife. It's not that simple, though, as Cathy's viewpoint is from the end back to the beginning of their relationship, and Jamie's viewpoint is from the start to the end of their five-year love story. Although many couples can relate to their roller coaster relationship, one person can identify with it most: composer Jason Robert Brown. If you were wondering if The Last Five Years is based on a true story, you should probably ask his ex-wife, Teresa O'Neill — she took legal action against him since she claimed it too closely resembled their relationship. Brown made some changes to make Cathy less like Teresa, but it was originally based on his own life.

“There’s a general assumption that the show is strictly autobiographical, but it’s not," Brown told He Said/She Said Critiques in 2011. "Jamie and Cathy started out being fairly close to their real-life counterparts, but as the writing went on, they both became much different; they followed their own paths, and I just chased after them and wrote down what they said.” He added that he wanted to "tell a simple story about a relationship falling apart" and he "wasn’t trying to settle any scores" — instead "just working through the very painful wreckage of a relationship that meant a lot" to him.

No matter where the inspiration came from, The Last Five Years is an incredible musical. Check out some songs from the movie's soundtrack here, which will tide you over until Kendrick-starring Pitch Perfect 2 comes out in May.