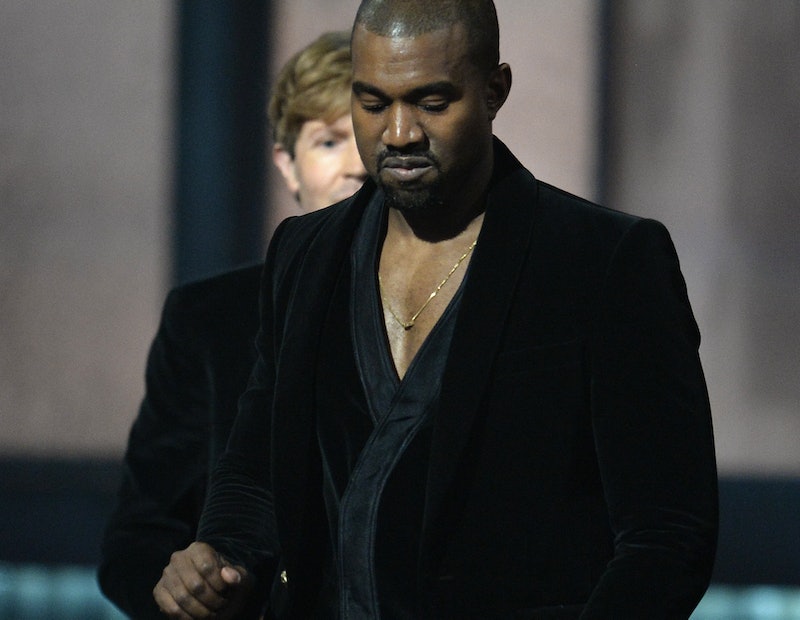 At this point, the only words I want to hear from Kanye West are backed by instruments, produced, and auto-tuned in a recording studio. Seriously, I'm inclined to take any of his other obnoxious soliloquies as one huge joke — much like his near-interruption of Beck's Grammy acceptance speech. I actually think he prefers it that way...at least, that's the most feasible explanation I can come up with for his rant on E!'s Grammy After Party, and it has to be the only reason for Kanye West blaming his outburst on having "a platform" to speak.

In an interview with Ryan Seacrest, West offered his explanation for suggesting (term used loosely, here) that Beck should give Beyoncé his Grammy, while appearing to express a minuscule amount of regret: "I think it came off the wrong way," West said. "That was a mis-wording on my part because obviously Beck is one of the most respected artists and respects artistry ... He’s his own man and he’s not wrong and we’ll still go play basketball and stuff [unless] he doesn’t want to do it."Then, incredulously enough, he tries to pin his word vomit on E! News: "I was given a platform," West said. "And when given a platform, it’s very hard, as we know - and I’m going to talk in the third person like I’m a crazy person — but it’s very hard for Kanye West to not be very true and vocal to what he feels."

While it's good that West is apologizing for the statements he made against Beck's Grammy win, the original rant still stands, and West's new statements hardly do anything to paint him in a different light. To be fair, I will acknowledge that his attempt at amending his original wording is a slightly different approach for West — I just have to ask, is it too little, too late?

More like this
Kim Kardashian Father’s Day Tribute To Kanye West Called Him “The Best Dad”
By Stephanie Topacio Long
What Is Ariana Grande's Net Worth? When It Comes To Money, She Has No “Problem”
By Hugh McIntyre
Beyoncé Delivers “Soaring Vocals” On New Album “Renaissance”
By El Hunt and Radhika Menon
Will Beyoncé Be At The BET Awards To Perform “Break My Soul” Or Attend The Show?
By Jake Viswanath
Get Even More From Bustle — Sign Up For The Newsletter