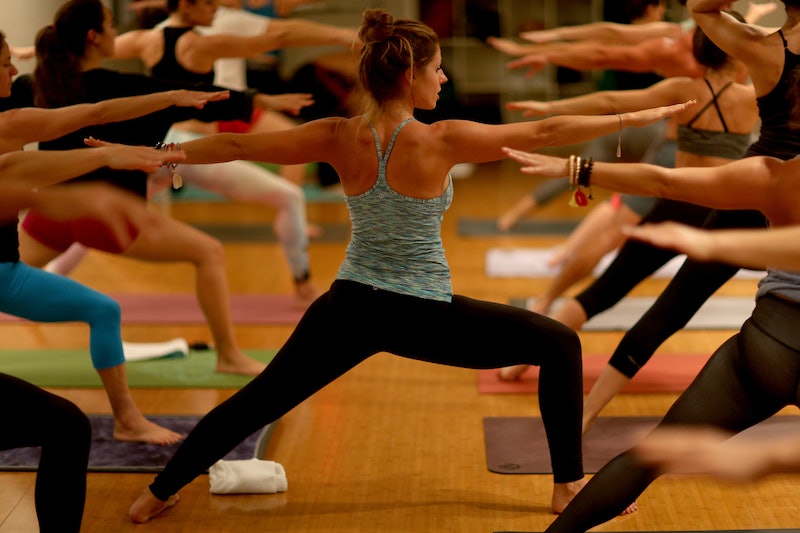 Of the many things out there to get outraged about — including things you might want lawmakers to take seriously, like online harassment or police brutality — you wouldn't think that yoga pants would be a big deal. But now a Montana lawmaker wants to outlaw yoga pants in public, so apparently, you'd be wrong. But seriously, does this guy really think the good people of Montana elected him to office to take away their yoga pants?

Republican Montana state representative David Moore apparently got upset about a naked bike ride held in Missoula last year, and so has decided to crack down and make the state more modest. In addition to banning public nudity, his new bill would make it illegal to go out in public wearing "any device, costume, or covering that gives the appearance of or simulates the genitals, pubic hair, anus region, or pubic hair region." And as far as he's concerned, that includes yoga pants. Because, you know, tight fitting clothing.

There are so many things wrong here it's hard to keep track, starting with the fact that the supposed "party of personal responsibility and individual freedom" is apparently okay with taking away people's choices for what to wear. It also seems like they're A-OK with making it the government's job to protect people from imagining someone's ass through the yoga pants, rather than relying on that person's responsibility to just not be gross. Also, hasn't the Supreme Court ruled that clothing is a form of speech? So how is banning yoga pants not also a violation of the Constitution?

Unfortunately, this isn't the first time someone has freaked out about yoga pants. In fact, people often seem curiously aggrieved by them. Which is strange because even though I understand that yoga pants can be sexy, they're also, you know, pants. They're not remotely comparable to something like a naked bike ride. Furthermore, even if they were, it's not anyone's job to prevent other people from objectifying them. If you're going to objectify someone, that's on you. You have to take responsibility for it. You weren't forced into it by a pair of pants.

And yet, here's just a sampling of the times people have hated on yoga pants as "immodest."

Veronica Partridge isn't the first Christian blogger to have a problem with yoga pants — that's been going on for a while now, but her post on why she gave up yoga pants early this year went viral, throwing a spotlight on her decision to help her husband and other men around her not to have lustful thoughts. (And obviously, if she's not comfortable wearing yoga pants she shouldn't have to, but let's not blame the pants for that discomfort). She says the change makes her "feel I am honoring God and my husband in the way I dress." Because everyone knows that God finds comfortable, stretchy pants to be an insult.

2. The Schools That Try to Ban Them

Schools still don't seem to be getting the message that it isn't their job to police what young women wear, but is their job to teach young men not to let themselves be distracted from their academics. Plus, there's the fact that sending girls home for dress code violations blatantly sends the message that boys' education matters more than girls'. Unfortunately, schools don't just target short skirts and low-cut tops, but also leggings and "spandex pants."

3. "The Theology of Yoga Pants"

I can't remember anything in the Bible about stretchy exercise pants, but that didn't stop Pastor Rick Herman from writing a post about "The Theology of Yoga Pants" on his blog in which he patronizingly gives young women "a little pastoral/fatherly counsel" on the subject. The piece includes gems such as "Contrary to popular opinion God made men and women different," and "Are you advertising what is not for sale?" The whole thing could be used as a prime example of how not to talk about women's bodies — and as an example of how ridiculous people can sound when talking about the sinful nature of yoga pants.

4. That Time a Pastor Said Women in Yoga Pants Responsible For Rape

Yes, this is unfortunately a real story. An Arizona pastor who preaches under the name Brother Dean Samuel told his congregation that women who wear yoga pants are partially responsible if they get raped. Which is the same logic, really, as telling women that our yoga pants make guys unable to help themselves from looking at us, but it is so infinitely more heinous that I can't even deal.

5. The Guy Shaming Girls at a Pro-Life March

Just in case you were wondering if the pro-life movement is about life or about controlling women's bodily autonomy, Adam Cassandra took it upon himself to complain about the young women attending a pro-life rally in yoga pants. Because apparently it isn't enough to show and campaign against taking women's choices away, these girls also have to follow patriarchy's narrow definition of acceptable dress while they do it. How else will their political opinions be valid?