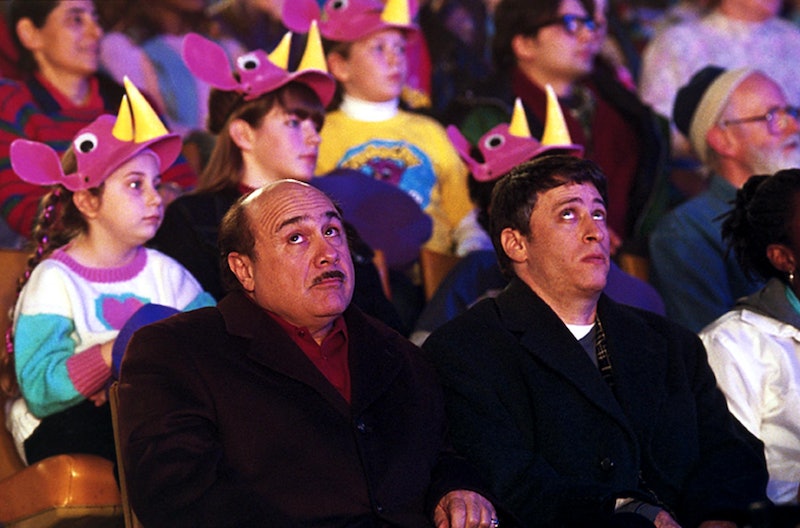 No matter where he goes from here, Jon Stewart will always be foremost known as the host of The Daily Show. The kingpin of fake news. The man who launched the careers of Stephen Colbert, Ed Helms, Rob Corddry, and Steve Carell, and brought Hardball crumbling to its feet. Yes, Stewart has cemented himself as a pop culture icon thanks to his tenure on the Comedy Central political satire series — but, it's worth noting that that's not all he's done to date. You might be forgetting that this man, was at one point, an actor!

Although Stewart never hit it too big as a feature film performer, he managed to amount a few memorable roles to his name. The man traded in comedy, drama, romance, animation, and even science-fiction and horror. He played nebbishes, sleaze balls, homicidal psychopaths, and garden variety weirdoes. Sometimes to cinematic splendor. Sometimes to... well, to a caliber that would explain why we haven't seen him do much movie work lately.

But to celebrate Stewart, which we all wish to do, is to celebrate everything he's given us... from his best acting roles, to even those he's taken in some less-than-great flicks. As such, we tread off into the endeavor of celebrating just that: all of Stewart's acting roles. The good and the very, very bad alike.

THE WORST: Jay and Silent Bob Strike Back

Stewart is relegated to the dumbest in Kevin Smith's arsenal of dumb jokes, engaging in a back-and-forth of genital-related wordplay with Will Ferrell.

In one of big screen animation's most forgettable forays (second only, perhaps, to the disastrous Oogieloves), Stewart plays a villainous creature named Zeebad. This movie was panned across the board.

Playing an otherworldly science teacher, a goateed Stewart strangles Elijah Wood and gets his hand cut off by Josh Hartnett. Little could redeem any of that.

Stewart went dark as a spineless television executive tampering on the wrong side of the law (and the industry). While the movie itself was a train wreck, Stewart's panache as a slithering goon wasn't exactly the work of grandeur either.

He's not much better as a money-hungry stockbroker, either.

Unbeknownst to Fran Fine, her new lover (Jon Stewart) is, in fact, her cousin Bob. It's weird. It's all just so very weird. Then again, Stewart was born to introduce himself with, "Excuse me, ladies. Which one of you ordered the short Jew?"

We're getting there! Stewart's turn in Big Daddy might not be the stuff of cinematic splendor, but at least it feels like genuine acting.

Stewart's beta male charms might have found a good home with a script of Reality Bites caliber back during the Gen X rom com era, but they got something a little more forgettable (albeit passable) in Playing by Heart.

There's something oddly memorable about Stewart's cameo in Half Baked, in which he spouted tell of the sensory enhancements that came as a result of marijuana use.

The stronger of Stewart's two (very) mid '90s romantic comedies, here he plays up his comic strengths as the unknowing "other man" in an affable love triangle.