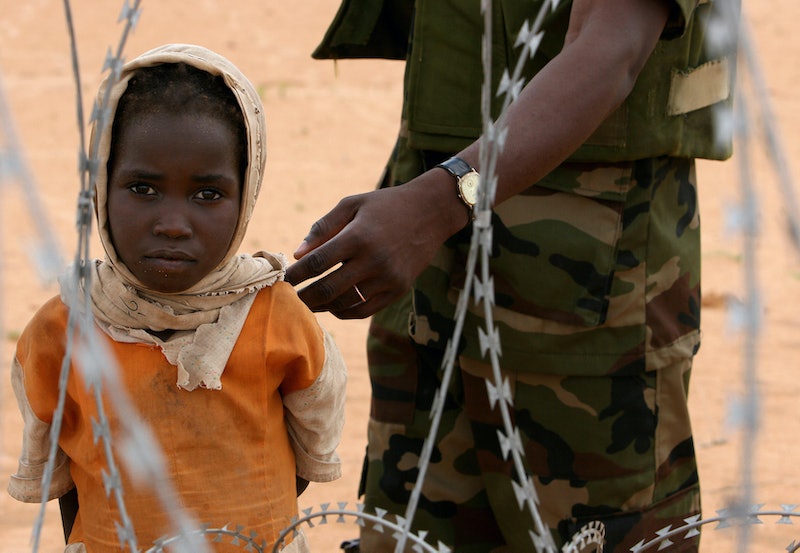 For years, the people of Darfur have battled sweeping genocide, starvation, and violent oppression. Despite what appeared to be a momentary quell over the last few years, due in part to the Doha Document for Peace in Darfur (DDPD) that was signed in 2011, it seems that behind the curtain of glossy media coverage, the situation in the south Sudanese region is still just as horrific as ever. According to a report released on Wednesday by monitoring group Human Rights Watch, more than 200 women and girls were raped by Sudanese Army soldiers over a period of 36 hours during an attack on the village of Tabit, which began on Oct. 30, 2014 — and though it's shocking, it isn't the only crime that the Sudanese government has been hiding.

The Human Rights Watch report stated that throughout the October attack, soldiers moved from house to house, raping, beating, and stealing from the women and girls inside. Over the past few years, the largely ethnic Fur region has been predominantly controlled by rebel groups, but Human Rights Watch investigators claimed in the report that no such ruling force was present in the region at the time of the attack.

After allegations of "mass rape" first surfaced in radio reports out of the Netherlands, the Sudanese government denied the claim and prevented peacekeepers from carrying out a full investigation. Human Rights Watch continued to push for witness reports, despite the restrictions.

The terrifying attack follows months of similar reports out of the North African country, including an Aug. 5 attack on the displaced civilians of the El Salam camp in southern Darfur by military and security forces of the National Islamic Front/National Congress Party regime, which is led by Foreign Minister Ali Ahmed Karti — an invitee to the recent National Prayer Breakfast in Washington, D.C. Only two days later, another camp was attacked and women were violently assaulted as well.

In March 2014, U.S. Ambassador to the United Nations Samantha Power criticized the Sudanese government for its perceived failure to protect civilians from fighting between rebels and national security forces, pointing to approximately 120,000 displaced citizens who had been forced from their homes due to the violent clashes. She stated in a council meeting:

The Government of Sudan's proxies and other armed groups continue to attack civilians in Darfur. We condemn the most recent attacks ... by Rapid Support Forces supported by the Government.

During a June 2008 press conference, Luis Moreno-Ocampo, a prosecutor for the International Criminal Court (ICC), accused the Sudanese government of hiding a major humanitarian crisis, saying:

For the last five years the whole Darfur area has been a crime scene. Girls are raped, schools are bombed. ... And they are covering up these crimes. ... [The government] has taken no steps to arrest [the men in charge]. ... [They have mobilized] to plan, commit, and cover up crimes.

The ICC had attempted to bring cases against militia leader Ali Kushayb and Ahmad Harun, former minister of state for the interior, in 2007, arresting and charging them with murder, rape, property seizure, and wrongful imprisonment among other crimes against humanity (one witness even alleged that Kushayb himself had inspected a line of naked women before allowing his men to rape them). Kushayb was eventually released from Sudanese custody in April 2008, "because there [was] no evidence against them," a spokesman for the Sudanese embassy in London told reporters. Throughout the debacle, Harun remained in place as the Sudanese minister of humanitarian affairs, and in May 2011, he became governor of South Kordofan — just next door to Darfur.

The Sudanese government is already seemingly doing everything in its power to downplay the vicious and tense atmosphere that hangs over its villagers' heads. In an interview with TIME magazine following the National Prayer Breakfast on Feb. 4, Karti told reporters that the claims of violence by the government and its allies were lies made up to keep the citizens in refugee camps:

Nobody can expect a village like Tabit which had been a home for some hundreds of the soldiers there, they have their homes there, they have their wives there, and they are living in a camp near that place, no one will expect those soldiers will come and rape by hundreds in that village. Not only the police is there, but the army is there, and it will protect you against anyone who will infringe your security.

... [The Sudanese media] have every right to go anywhere and talk about anything that may be causing atrocities to their homeland and people, so if nothing is coming out of that, that means that is only portraying the country in a way that will not at all help somebody like me to convince those who are in charge of a decision like removing Sudan from the list of terror.

Until Sudanese leadership decides to crack down on its own internal corruption, the genocide and sexual violence will continue, said Daniel Bekele, Africa director at Human Rights Watch, in a dispatch:

Sudan has done everything possible to cover up the horrific crimes committed by its soldiers in Tabit, but the survivors have fearlessly chosen to speak out. The UN Security Council and the AU should demand that Sudan stop these attacks, urgently act to protect Tabit’s residents, and conduct a credible investigation.