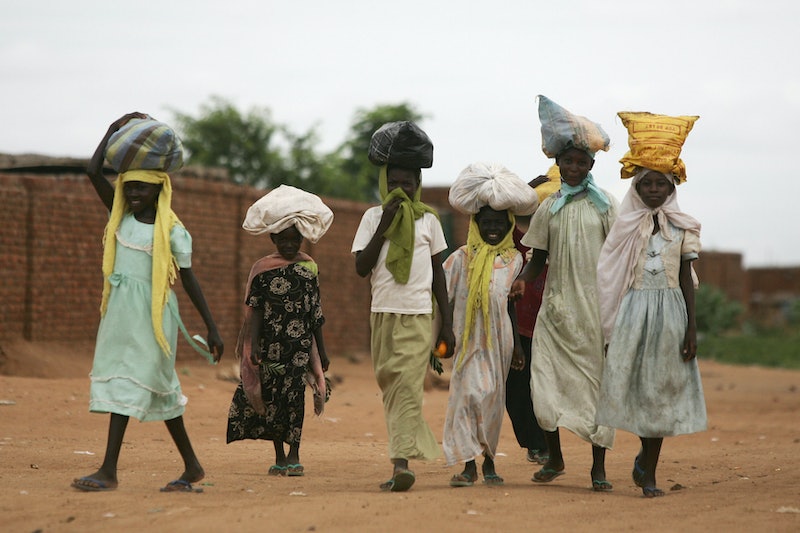 Sadly, the bloody war in Darfur has been going on for so long that many people have stopped talking about it altogether. Since rebel groups began fighting the Sudanese government in 2003, hundreds of thousands of Sudanese civilians have been killed, and over two million have been displaced from their homes. But brutal murder isn't the only tool that the rebel forces, together with the Sudanese government, are using to incite terror — this genocide also uses rape as an act of war. According to a report from the Human Rights Watch released Wednesday, Sudanese government troops raped 221 women and girls in Darfur in a 36-hour period in 2014.

The report, entitled "Mass Rape in Darfur: Sudanese Army Attacks Against Civilians in Tabit," details information from over 130 interviews conducted with victims of the mass rape. The attacks took place in the village of Tabit in North Darfur from October 30 through November 1, 2014. In its report, HRW says the mass rape and concurrent abuses are "serious violations of international law." Over the 36-hour period, government soldiers reportedly went house-to-house, searching homes and looting property. They beat residents, detained men, and raped the women and girls they found. According to HRW, residents recognized the attackers as members of the Sudanese Armed Forces stationed nearby.

The HRW has labeled these acts "war crimes" and demands that those responsible be held accountable:

Rape and other serious abuses against civilians in Tabit are serious violations of international humanitarian law (the laws of war) and international human rights law. Military personnel who participated in, aided or abetted, or ordered rape are responsible for war crimes. Commanding officers who knew or should have known of the mass rape – and took no action to prevent it or punish those responsible – are criminally liable as a matter of command responsibility.

According to the report, the attacks were "systematic," carried out in three separate raids over the 36-hour period, and "may amount to crimes against humanity."

Crimes against humanity are serious offenses, including murder, torture and rape, committed as part of a widespread or systematic attack on a civilian population. As Human Rights Watch research has found, the rape was on a large scale and thus could be considered widespread. It was carried out in multiple locations at the same time during the course of three successive attacks on the civilians in the town, indicating it was systematic.

Since the attacks, HRW reports that the Sudanese government has taken "drastic measures" to cover up the crimes and prevent information from becoming public. They claim that no rape has occurred in Darfur. According to the report, government officials "threatened, intimidated, beaten, detained, and tortured" residents in order to keep them from speaking about about the attacks. In an interview with TIME, Foreign Minister Ali Ahmed Karti denied that there had been any mass military rape in Tabit.

Why haven't you heard about the continuing violence in Darfur? Why hasn't a majority of the popular U.S. news media released anything about this report, which clearly details human rights violations en masse? So far, NBC News has published one article, as has CBS News. Reuters has also reported on the atrocities.

But we have yet to hear from The New York Times, The Washington Post, FOX News, or ABC News. What could be more of a pressing issue than the systematic rape of hundreds of women and girls — some very young children — in the midst of a twelve-year attack on Sudanese civilians?

It's true that tragedy comes in spades. On Wednesday, President Obama sent a war draft to Congress asking to send troops in to combat ISIS after the death of Kayla Mueller. News also broke today of the murder of three Muslim students in North Carolina. And there are 300 people dead in the Mediterranean Sea right now, ostensibly after botched immigration attempts. It seems like all news is bad news right now.

Though we may be facing domestic issues, we cannot be blind to adversity abroad. It is our responsibility to consider those facing violence overseas. Even if the victims may be socially marginalized — as they are, no doubt, as poor African women — their suffering matters.