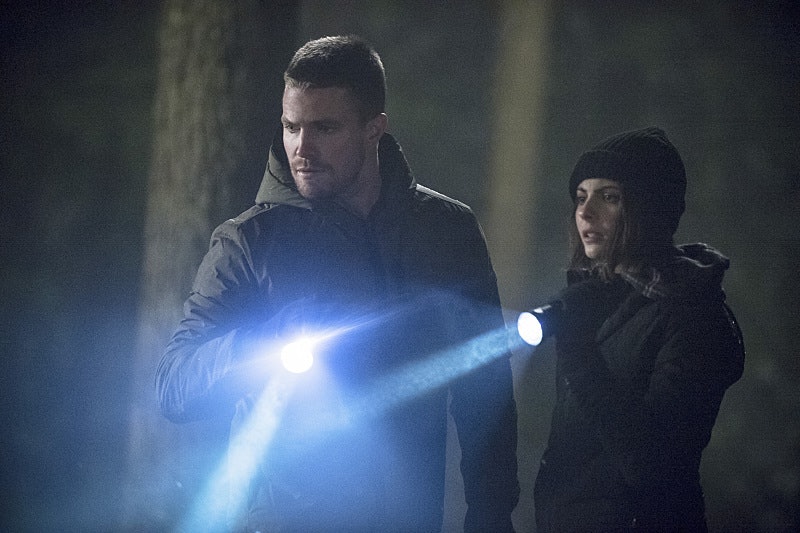 There's no doubt that Wednesday night's Arrow episode "Canaries" was jam-packed with a variety of twists and turns. In fact, I'd go so far as to say everyone had a pretty severe case of word vomit: Thea knows Oliver's secret; Det. Lance knows Sara is dead. Anyway, you get the idea. However, as per usual, the series left its most intriguing reveal for last. Now that Oliver, Thea, and Merlyn are officially the three Arrow-keteers (just go with it, OK?), there are a bevy of training exercises to be done — one of which includes the Queen siblings conquering their own fears. And according to Merlyn, the best way to do that is to send Oliver and Thea to the island of Lian Yu (aka where Oliver was trapped in all those flashbacks). Prepare yourselves, everyone because WE HAVE TO GO BACK! (Sorry, but as a huge Lost fan, I was obligated to do that.)

Basically, Ra's al Ghul likes to defeat his enemies by tapping into what they fear most. (So, in my mind, he's pretty much a walking-talking version of Vertigo.) And obviously there's no better way to become a master of your deepest and darkest anxieties than by hashing it all out on a remote island with family. But while that may sound good in theory, let me assure you that this whole ordeal is going to be no day at the beach, so to speak. Because much like the survivors of Oceanic Flight 815, Oliver and Thea are not alone on the island.

So who's exactly lying in wait for them? (Spoiler: it's not, in fact, the Smoke Monster.) No, it's something much, much worse than that. Given what we've seen from next week's promo "The Return," the other occupant on Lian Yu is none other than Deathstroke, though you may remember him better as Slade Wilson. Yup, it's happening, people. So these two are clearly going to have their hands full throughout this little adventure. And while I have absolutely no idea how this is going to possibly play out, I'm betting Slade's not interested in letting bygones be bygones.