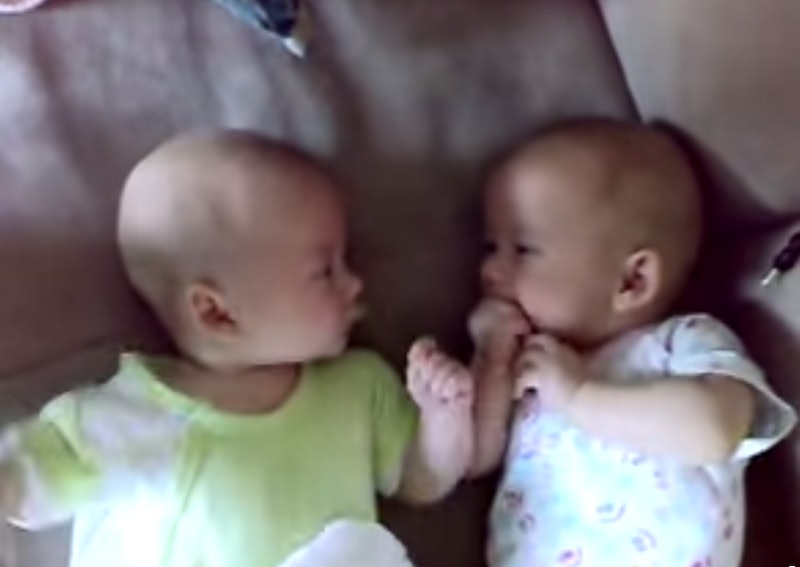 I don't personally have a whole heap of early life memories. I do recall vague details from a handful of conversations I had with my sister, who is two years my senior, when I was very young. However, the things I remember from that early mostly revolved around us having bad sharing skills, especially regarding important stuff like My Little Ponies. Sisters have their own unique, bizarre language. But none of that compares to the insanely esoteric communication shared between twins. When you spend time with another person in an actual womb, that's bound to spur some intense intimacy. Twindom is mysterious and endlessly interesting. Like, what is it actually like to share an immediate bond like that? Well, here's two twins that suggest evidence that it's a pretty great time.

These little fellas (or ladies? Or one of each? It's unclear, and who cares, gender is an illusion, etc.) are caught on video engaging in quite the back-and-forth. Swapping jokes, maybe? Perhaps they're trading thoughts on the whole Jon Stewart situation, or talking about sweaters knit specifically for penguins. Hey! I never said I was a baby expert. No one could ever know for sure just how much comprehension an infant has about the world around them before proper human speech becomes the norm. I guess it's like the saying goes: it's not what you say, it's how you say it. And these babes say it in the cutest way imaginable.

Now that I think about it, non-twins get super short-changed in the "natural, inherent access to actual human magic" department. I wonder if it's too late to call up my 29-year-old sister and develop a new code language involving mostly grunts and coos. She'd probably be down, right?