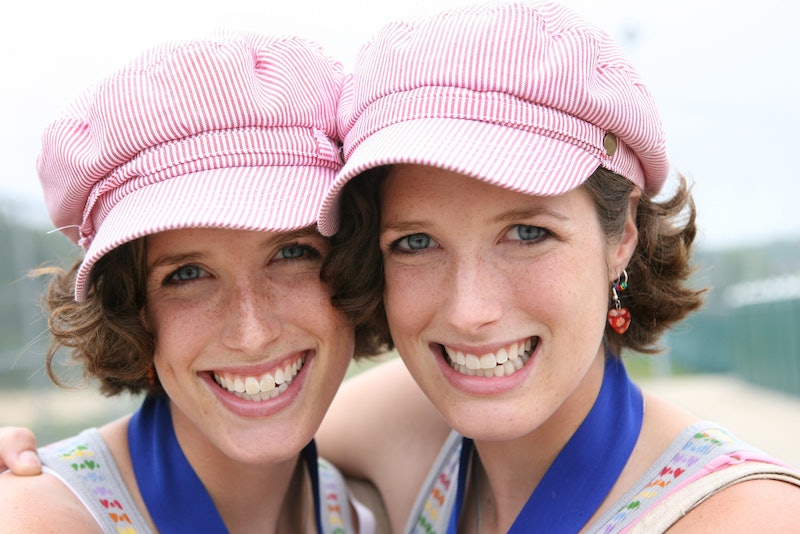 Between all of the Mary-Kate and Ashley movies, Sister Sister, and The Parent Trap, '90s pop culture was truly the decade of the twin. "Sporty" Mary-Kate would have been incomplete without her "girlie" twin sister, Ashley. Tia Mowery, the "intelligent" twin, would have been boring and uptight if her twin sister Tamera, the boy-crazy one, hadn't been in the picture to balance things out. The Parent Trap basically gave every only child hope that they, too, had a secret twin out there somewhere just waiting to be their best friend and teach them the wonders of peanut butter and Oreos. Don't get me wrong, I love Passport to Paris as much as the next Olsen fan, but I'm here to say that life as an identical twin doesn't always include perfect matching outfits or interchangeably adorable boyfriends.

Being a twin certainly has its perks, but it also comes with a unique set of challenges. Whether you were half of a set of twins that did everything together, or you preferred your independence, growing up with an identical twin likely set you apart from your boring, singleton friends in a number of ways.

Without further ado, here are 45 things only we identical twins can truly understand:

When you look at baby pictures, you often have absolutely no idea which one is you

and When you look at toddler pictures, you still sometimes have no idea which one is you

and If they haven't already met your twin, they're borderline obsessed with meeting her

if you grew up in the '90s, you and your twin probably wore matching overalls

Or denim hats. With flowers.

Or warmup suits. Or chaps.

Simply because adults thought it was cute. It was not.

As were Mary-Kate and Ashley

As were Elizabeth and Jessica Wakefield

Growing up, your friends repeatedly tested you and your twin to see if you had telepathic powers

Sadly, you did not

but If you and your twin ever said the same thing at the same time, everyone in the room FREAKED OUT

but You still don't have a decent answer, as it’s pretty much like being asked what it’s like to breathe

your reaction when people ask if you've played tricks on your parents/teachers/friends:

And, for the record, YES. You did

Except they were boring and lame, so you don't really have any good stories

your reaction when people ask if your parents can tell you and your twin apart:

of course They can. They are your parents

your reaction when people ask if your friends can tell you apart:

If they couldn’t, they probably wouldn’t be your friends

Whether you liked it or not (YOU DID NOT), you and your twin had to share clothes as kids

no, This DIDN'T mean you had twice as many clothes as non-twins

When it came to pretty much anything, you and your twin were extremely competitive

But when anyone asked if you were competitive, you’d immediately say “NO”

So they're "like, really, really good" at telling twins apart.

...and you only now realize it was because they were terrified they'd get your name wrong

When a random stranger inexplicably seems to know who you are, you aren't creeped out

Because you know they're most likely just friends with your twin.

Shopping with your twin is incredible, because they can try on clothes for you when you're too lazy

You know what it's like to have someone who has been through Every. Single. awkward phase with you

And it's oddly comforting

yup, you two were meant to be together.

I love you sis!