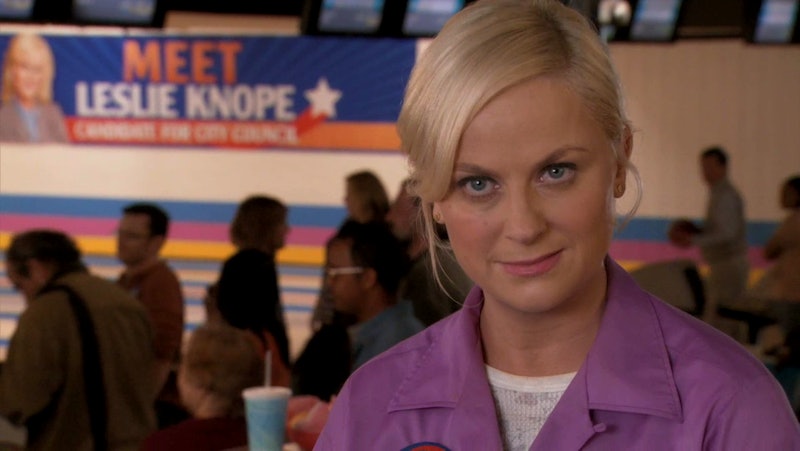 If you had told me a year ago that I would currently be working a job I love, and that I would be genuinely excited to wake up every morning, I probably would have cry-laughed at you and then returned to the metaphorical (and deeply existentially-fraught) rock I was living under at the time. A year ago, I was working in an office assistant job that I secretly hated with no opportunities for promotion, after smugly graduating college early and bottoming out in Nashville as a songwriter. I was not the prettiest sight, but I also wasn't a rare one: A lot of 20-something recent grads have no idea what we want to do with our lives, and feel April's struggle on Parks and Recreation just a tad too hard.

The idea of writing for a living was so far beyond the stretch of my imagination that I never even gave the idea of it full consideration. After my experience in Nashville, I'd pretty much given up on the idea of writing for a living altogether. So yes, 2015 me would probably have thrown 2014 me for a loop if I had a time machine and could warn her that there were ridiculously good times up ahead. I was just sort of conditioned to believe that we no longer lived in the kind of world where "dream jobs" exist. So first, I feel like I have to emphasize for anyone out there who hasn't found dream job yet: They totally do exist. All those myths about work not feeling like work and time going by so fast you don't even realize the sky got dark are a legitimate reality, and I wish it on everyone on the planet who is April Ludgate-ing as hard as I did after college.

Of course, having your dream job comes its own set of new anxieties that are entirely different in nature than the ones you had before. All the perspectives in your life shift, and you find yourself focusing on these worries more than ever before:

It can be a fear as ridiculous as someone jumping out and yelling "APRIL FOOLS!" It might seem silly, but a part of you will always be afraid of realizing that this whole "dream job" thing is actually like the fourth season of Felicity when everything that happened was actually just an elaborate hallucination. It can also be a fear as real as your job disappearing and getting swallowed into the economic abyss. When you are especially flabbergasted that someone is willing to pay you to do something you love doing, this worry is constant.

You have to prove yourself worthy of it every day

I have always switched between being an extremely competitive person and being an extremely non-confrontational one, which makes internet writing a perfect fit for me: You're competing with other outlets all over the world, but you never have to look anybody in the eyes while you do it. But there is still an enormous pressure to prove that you belong somewhere, even if you have the experience and a track record to back you up. Dream jobs are called that for a reason—lots of people want them. And you feel like you have to be on your A game at all times to prove not just to your employers but to anyone watching that they didn't make a mistake in giving you this awesome job.

You'll get too comfortable in your position

Being boring and stagnant is probably my actual worst fear in life. Because of this, I am constantly concocting ways to improve myself or my writing, which leaks out into full days of reading authors I admire, blasting out my writing wherever I can, and writing in basically every medium I feel passionate about, from internet writing to songwriting to fanfiction (where the cool kids hang out). I have a confession to make: I will sometimes go weeks at a time without watching Netflix, and I don't even mind. The fear of getting too comfortable in your job is a real one, but it's honestly probably the most productive fear you can have.

You will literally never be able to talk about anything else

You know how I know my friends are real and true friends? None of them has murdered me yet. When you love your job as much as I do, it is at the forefront of your brain 24/7. They've heard me say "HEY, GUESS WHAT I DID AT WORK TODAY?!" roughly a trillion times by now, and they still haven't blocked me. That's friendship, you guys.

You will never be able to turn your brain off

Similar to the "OMG I love my life" verbal vomit you inflict on all your friends, when you have a dream job, you're never really "done" for the day. Even when I'm not technically working, I'm thinking about working or checking up on my work or planning for the next day. This is especially true for writers and other creative professionals; We are often working on so many different projects at once—and love them so much—that the line between work time and free time becomes so tragically blurred that most of us can't even differentiate between them anymore. In other words, boundaries: you don't have them when you have a dream job. I have tried to do this thing once a week where I turn my brain off and do something mindless like take a bath or watch TV. I've tried. I'll get back to you when I have managed to successfully do that without manically grabbing a notepad and multi-tasking five minutes in.

Your biggest competition is yourself

You don't think it is possible to be jealous of yourself until you get a job that you are crazy about. For me, if I have an article that does really well, my immediate next thought is to write something that will top it. And if I fail, I don't hate myself, but rather myself from a month ago or even myself from years ago. Who the eff does Past Me think she is, being better at her awesome job than Current Me is?! I'll get my revenge if it's the last thing I do.

You overthink everything you say and do

It is easy to visualize yourself in your dream job, and odds are, before you got it, you visualized your ass off for years. But it's entirely different once you're actually there and words have to come out of your mouth in real time and you have to really live that dream. I'm constantly worried that I will say or do the thing that reveals my complete and total inadequacy. In a Ted Talk, psychologist Meg Jay said, "Twenty-somethings who don't feel anxious and incompetent at work are usually overconfident or underemployed." This was comforting to read for about five minutes, and then I went right back to feeling anxious and incompetent (which is, ironically, a good sign).

Sometimes I think of my life as a game of whack-a-mole. I whacked the mole that was my job goals so hard that it's basically unconscious, but now all the other moles—relationship goals, financial goals, self improvement goals, and even the idea of having a family one day—well, they're all up and retaliating, maybe because they're mad that I just whacked one of their friends. It is an amazing thing to be able to be in a job you love. It is another thing entirely remembering that you have a whole other life on the side that is every bit as messy and unfinished as it is great.