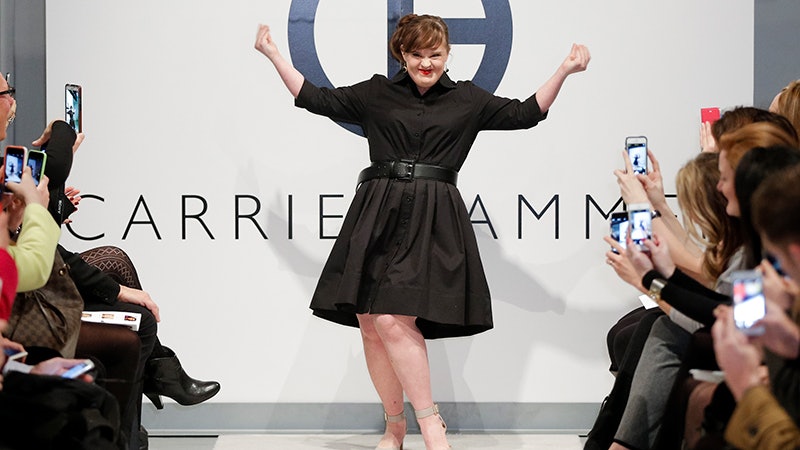 Attending a Carrie Hammer fashion show is a singular experience that ties audience members together in support and celebration of a greater cause, and the designer's Fall 2015 runway was the most commendable yet. Complete with a cast of incredibly accomplished role models, Carrie Hammer's fashion show for Fall 2015 presented viewers with the sort of genuinely enjoyable and uplifting experience which is surprisingly rare during Fashion Week. Such is the outcome when a talented designer and businesswoman bands together with a group of similarly clever women to create a product that is as meaningful as it is beautiful.

Held at Chelsea's Lightbox in New York City and sponsored in part by Bustle, Hammer's show hit all the marks of a couture presentation even before the lights lowered and the music began. Before the doors opened to the venue, a group of cozily dressed women, along with a smattering of men, queued up in front of the building, excitedly chattering about Hammer's remarkable achievement. The designer's feat was on full display this season, as the lights lowered to reveal a video montage of Hammer's role models and a short introduction to debut the hardworking executives and leaders the designer selected for her runway.

Set to the beats of remixed songs which highlighted themes of female empowerment and perseverance, a lineup of poised women took to the runway as if it were their job. Their actual jobs included Founder of Black Girls Code (Kimberly Bryant), Principal and Corporate Responsibility Leader of Price Waterhouse Coopers (Shannon Schuyler), Director of Social Good Programs for Microsoft (Wendy Norman), and actress on American Horror Story (Jamie Brewer, who is also the first model with Down Syndrome to ever walk in NYFW).

Forget the models who saunter down other runways with their dubious sponsorships and #multitasking lives. Carrie Hammer's models are actual multi-taskers, balancing prestigious career accomplishments with families and philanthropic endeavors. Each role model displayed marked pride in herself, with especially notable strides from SVP and Global Chief Creativity Catalyst of McCann Worldgroup Nicole V Cramer and Bustle's own Associate Fashion & Beauty Editor Marie Southard Ospina. The enthusiasm of the role models was infectious, and Hammer's audience greeted each with a round of hoots and cheers.

Hammer's clothing was also on-point, featuring luxe leather accents, waist-defining cuts, and ultra-feminine pleated skirts. Universally flattering jewel tones and rich dove grey hues lent each model extra spring in her step, but as always the incredible precision of fit was the highlight of the collection. Hammer's modus operandi is to provide women with the confidence they require to succeed through her designs, and her latest endeavor no less than excelled in the arena.