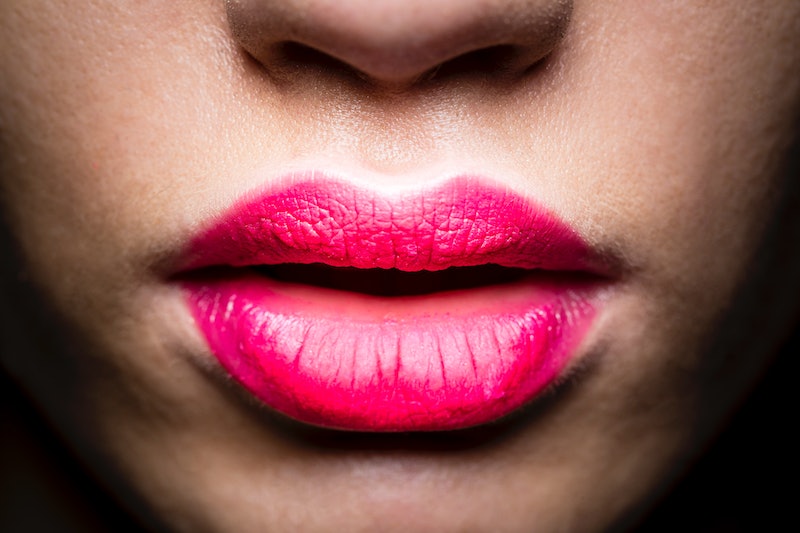 Dear haters: in my opinion, dirty talk is fun. If you’ve never tried talking dirty to your partner, it’s definitely something I think you should give a whirl at least once. Even if you giggle your way through it, blush a bit, and perhaps even stumble over your words as you search for the ideal phrase that’s going to blow your partner’s mind, it’s a learning process. Once you get the hang of it, you’ll realize just how much it adds to your sex life — and how great it can be for your relationship as a whole.

While learning how to talk dirty takes some practice, it’s an honest and open way to communicate to your partner about your sexual desires. You’re both submitting and dominating; engaging in a give and take of sexy words, and it makes for some deliriously hot foreplay.

While Bustle's covered why dirty talk is good for your relationship and even how to go about talking dirty without feeling like a total idiot, we’ve yet to ask our readers how they feel about the topic. So we asked about your opinions on dirty talk, and whether or not you love it — or just think it’s a bit too ridiculous. Here's what you had to say.

"It's mostly awkward and boring as f*ck — but occasionally it's excellent."

"I don't mind it. I'll say a few things here and there, but I'm too much of a realist to actively participate in the type of talk that requires imagination. Usually it leaves me thinking — 'You want me to what? Just how would I DO that?' And then I'm lost in my own mind with zero participation in the chatting part."

"I tried it once, at the request of my boyfriend at the time ... and realized I wasn’t dirty. I didn’t know what to talk about. Outside of ‘f*ck me harder,’ I just fell flat. He wasn’t all that great at it either, so at least we could laugh about it later."

"Meh. It just feels super awkward to me. I mean, I'll blurt some shit out during sex but it's never intentional, never really with any forethought about whether or not it will be "sexy." I feel like if you're in the moment and you say something, that's really hot — but like — asking someone to talk dirty? It just feels forced and awkward."

"Love it. Need it. Can't really get into it without it, and the dirtier the better. But I can't express myself in that way, because it makes me feel like a fraud. I just need to hear it."

"I think part of my problem is that I don't think talking about sex is dirty. So the few partners I have had that were into dirty talk, I just didn't know how to respond. I think I don't get the same thrill out of it. I will totally say, 'hey, this is what I am into,' and will ask folks in the moment if they want something or like something, but that's it. Folks who are really into it or like to swear in bed or say dirty things ― just to be dirty ― they confuse me, and make me vaguely uncomfortable."

"I dated a guy in college who was really in to talking dirty and at first it was really hard for me. I felt so silly, but after awhile it felt comfortable. It's not part of my usual repertoire, but sometimes, after a few drinks, I'm into it."

"I love it, but sometimes it turns into nervous narration and drags on."

"My first language is Portuguese so while I can talk dirty in English, I can't do it in Portuguese, because it feels weird. Doing it in English makes it seems distant and not so funny."

“It depends. If we’re into the same idea of what’s ‘dirty,’ then I think it’s hot. But I’ve been with guys whose idea of sexy talk involved things kinky type shit that isn’t my thing. That was weird and I couldn’t force myself to pretend I was into it.”

“In theory it seems like fun. I even fantasize about it. But once it’s going, all I can do is laugh.”

"I like the idea of it, but the reality always feels really awkward or silly. I have a hard time saying anything with a straight face. If I'm really swept away in the heat of the moment I'll say my boyfriend's name ... but usually that's it."

The more porny the dirty talk though, the less arousing I find it. I've been with people whose dirty talk was so clearly derived from pornography that I have either told them or held my tongue but have always wanted them to shut up. The best kind of dirty talk I find is the kind that comes naturally ― no pun intended."

"I love talking dirty, which looks funny typing out. It could be because I'm in an LDR with my boyfriend, but I honestly think that's just a reason why it happens more often than if I saw him everyday. I think it's fun and flirty; I think it lets me and my partner be silly in some of the things we say and it's also one of the ways we discover what we would want to try out or what turns us on (and off). I'm a very sexual person, so talking dirty is just fun play to me."

"I've always been very 'vocal' when I'm enjoying sex, and I've always had a tendency to just blurt things out when I'm really into it (especially if I've been drinking).

I'm not sure what about it turns me on so much, but getting really into it with that mid-20s boyfriend was one of my first experiences of realizing how much being 'turned on' sexually is psychological, rather than physical."

"I'm not a big fan of dirty talk; I think it's cheesy! If someone is really explicit about what they want to do to me (when, how, or why) it turns me off. I'm not really sure why, it's just a natural aversion that I have."