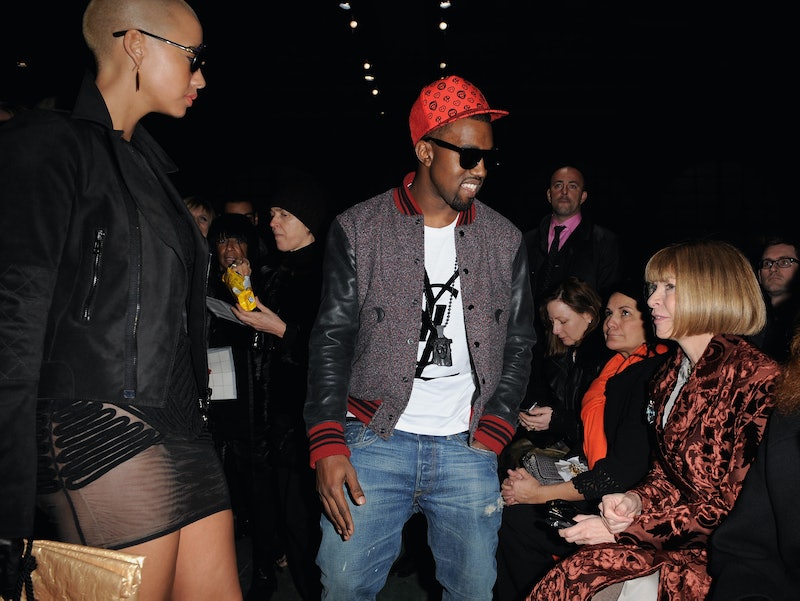 About an hour ago, Kanye West presented his collection with Adidas at the Skylight Clarkson Square in New York to a crowd of friends, family, and 50 theaters around the world. Because of course streaming was necessary. According to Twitter, sitting in the front row was wife Kim Kardashian, daughter North West, close friends Jay-Z and Beyonce and none other than NYFW's queen Anna Wintour.

At this point, we all know that the Kardashian-West family has a pretty close relationship with Vogue's EIC. Not only did Wintour and co. welcome the idea of putting the couple on their now infamous cover, she also went on to sing their praises in her editor's letter. More proof: this adorable photo of Wintour, Kardashian, and baby Nori sharing a moment. Needless to say, they've reached a level where they probably have inside jokes and feel comfortable telling one another if they've got caviar stuck in their teeth or something.

For those reasons, I can only imagine the thoughts that were going through Wintour's head when she was seated next to Kardashian and a rather unhappy North West at Kanye's show. Nori very much looks like she'd rather be anywhere but there, while Kardashian looks absolutely panicked. And Wintour's face? Well, I think it says it all. And even though it needs no explanation, here are 9 things I think Anna Wintour probably said to Nori.

2. "If you don't pipe down, I'm not putting your parents on the cover of Vogue again."

4. "If you make it through the show, I'll get you another Lanvin ensemble. Promise."

7. "At least your mom didn't make you wear heels."

8. "It could be worse, Nori. You could be in the second row. With Justin Bieber."