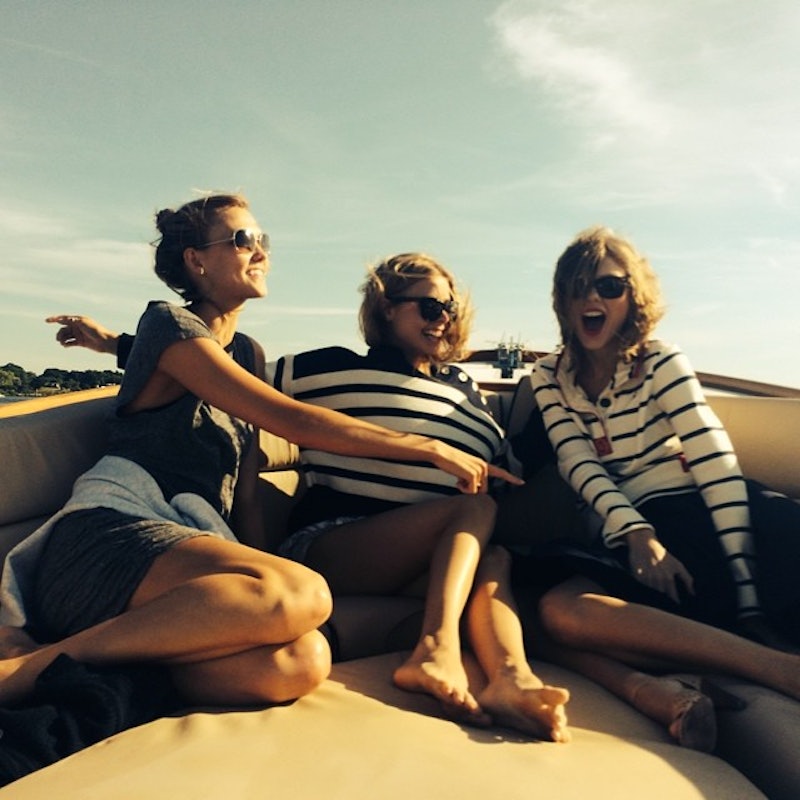 If you're a Parks and Rec fan, or even have ever casually heard of the show, then you've probably heard a lot about Galentine's Day. Taking place on February 13 of every year, the Leslie Knope founded holiday is all about ditching the dudes and having fun eating breakfast with your ladies, single or otherwise. It's a wonderful alternative to the ultra romantic Valentine's Day that can leave all the single ladies (and single dudes) feeling more than a little left out, and it gives you the perfect excuse to do what we all usually wish we were doing anyway: hanging out with our friends and eating breakfast foods. Of course, Leslie Knope isn't the only person who celebrates Galentine's Day. In fact, the holiday is practically a legitimate holiday in its own right, which means it's totally fair to speculate on how your favorite celebrities would celebrate it.

Sure, there is no confirmed proof that any of the seven celebrities below actually celebrate Galentine's Day, or even know what it is. But, hey, it's totally possible to celebrate it without realizing you're celebrating it. If you're ever looking to have a Galentine's Day party that is exactly like one that, say, Beyoncé might be at, then I've got you covered. You only need to know what these stars are like to know what their preferred Galentine's celebration of choice would be.

Have you seen the "7/11" music video? If you haven't, you need to go and watch it right now because I imagine that is exactly what it's like to hang out with Beyoncé. Our girl Bey just calls up a bunch of her friend and goes, "Hey, are you guys bored? Do you want to get kind of tipsy and dance around my house in our pajamas? And maybe have someone film it? And also it's a music video?" When you're Beyoncé, you kind of have all the confidence required to know that there is no wrong way for you to celebrate Galentine's Day. If you're doing it, then it's the right way. Important life lesson right there.

Selena Gomez's Galentine's Day celebration wouldn't be too far off from Swift's to be honest — which is fitting since the two are very close friends. However, the thing that differentiates the two is that, while Swift's gal pal hangs out are about being random and crazy, Gomez's gal pal hang outs are about having the most fun possible. No matter what you're doing with your lady friends, whether it's making a YouTube video on your joint channel or having a food fight, if no one is cracking up then you're not doing it right. A Gomez Galentine's Day celebration gives everyone around her serious FOMO.

If you're celebrating Galentine's Day with Lorde, then the key word with your ladies-only party will be loyalty. You're going to have a small group of your closest friends doing low-key things like going to the beach or hanging out in the kitchen or getting ice cream together; nothing fancy, but the ladies you're surrounding yourself with are your ride-or-die chicks. After all, Lorde came snarling to the defense of Taylor Swift against Diplo once upon a feud ago, so you better believe her Galentine's Day would be solely about her core group.

Is it just me or is Emma Watson basically the most active celebrity feminist out there right now? So, you'd better believe that her Galentine's Day would be spent, well, helping other women. You don't have to spend it giving a speech in front of the UN or anything, but, if you're looking to use Watson as your inspiration for celebrating the most sacred of days, then you should be seeking to do a little something for someone else — buying those groceries your mom is trying to find time to pick up, tweeting out a women's charity to your followers, that sort of thing.

Anna Kendrick is the same woman who made a Ryan Gosling masturbation joke and tweeted it out to her followers, so you should brace yourself for any Galentine's Day inspired by her. You won't just be having fun á la Selena Gomez — you will be doing the most insane stunts humanly possible, the kind of stuff that would put any collection of drunken Facebook photos to shame. You'll also probably be listening to a lot of Beyoncé, because nothing gets you pumped for a party with all your ladies than a Queen Bey song — something Kendrick, a huge fan, knows very well. Regardless, your party will be a story that everyone will be telling for weeks to come.

Let me go on record as saying that Chrissy Teigen is literally one of the cutest human beings in the world. This is a woman who mocked her own meme when it was created literally ten minutes after she was on television, after all, so you can bet that her Galentine's Day celebration would be a pun-happy, social media savvy, rip roaring good time the likes of which none of us can even imagine. To have a Teigen-inspired Galentine's, take more selfies than Kim Kardashian, have more fun than Gomez and Kendrick put together, and, when you're done, make it into a meme. You're welcome, gals.