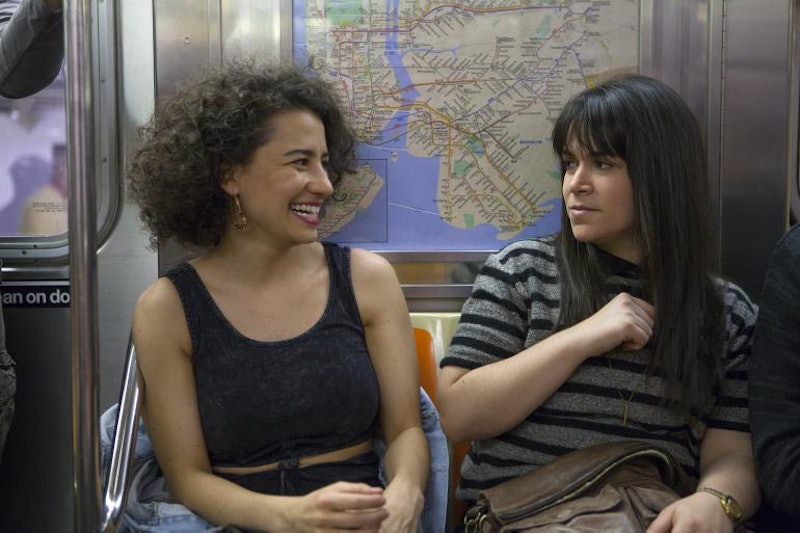 There are a lot of reasons I still love Grey's Anatomy 11 seasons into its run, from the great cast to the realistic characters to the fact that Shonda Rhimes could write an episode about filing your taxes and somehow make it must-watch TV. Yet perhaps my favorite thing about the show is how it approaches female friendship; whether it's showcasing the early nerves of making a new pal, dealing with maintaining a bond over long-distance, or explaining why being someone's "person" is the biggest and best responsibility you can have, Grey's has always been at the forefront of highlighting the connections between women.

Yet ever since Cristina left for Zurich and she and Mer were forced to use Skype to keep in touch, there's been a serious lack of female friendship in my beloved show. Sure, Mer and Maggie are starting to hang out, and Jo and Steph are relatively close, but without the Twisted Sisters in the center, the series is just not the same.

Luckily, there are still plenty of other shows out featuring strong, supportive bonds between women that are helping to fill the void left by Mer and Cristina. Below, the seven best female friendships currently on TV — and no, Girls isn't on the list, because they all kind of hate each other and should never even be friends.

I don't need to tell you why Broad City is the best, or how the show epitomizes everything great, horrible, and cringe-worthy about New York in your twenties. By now, this is common knowledge (or at least it should be). I'll just say that if you're not watching the series, you're missing out on one of the greatest, weirdest, and most realistic female friendships on TV.

Leslie and April (Parks and Recreation)

Leslie was heartbroken when Ann left for Michigan, but thankfully, they still keep in touch every day and see each other as often as possible. Yet the physical absence of her best pal took its toll, and Leslie sought comfort in her young mentee, April. Good thing she did, because the two women are incredibly kind, supportive, and (sorry, April) loving towards each other. It's impossible to watch Leslie try to get April a job or April admit that she looks up to Leslie without tearing up, at least a little.

Taystee and Poussey (Orange is the New Black)

It killed me to watch Taystee and Poussey fight last season, because those two have one of the most wonderful friendships on television. They're always there for support, know each other's weaknesses, and, last season, proved that they're strong enough to put aside their issues in order to save their friendship.

Jane and Xo (Jane the Virgin)

Not often does TV show a loving mother-daughter relationship, but even if it wasn't rare, the bond between Jane and Xo would be special. The duo care deeply for one another, are always honest about their feelings, and often put each other's needs before their own (the Quinceanera flashback!). It's a sweet and beautiful relationship.

The ladies at the center of Playing House lean on each other for support, vent about their lives, and work on maintaining their bond despite chaotic lives. In other words, they're real — exactly the type of friendship TV and movies so often fail to show.

Pop culture seems to think that whenever teenage girls hang out, the only things they do are talk about boys, fight over boys, and cry over boys. Pretty Little Liars doesn't play by those rules. Its central four characters bond over so much more than just the guys in their lives, and despite the chaos that surrounds them, they always put each other first.

Alicia and Kalinda (The Good Wife)

The bond between Alicia and Kalinda hasn't been as strong of late, and for awhile now, they've barely even been seen in the same room. Yet longtime fans of The Good Wife know that the women's friendship can survive anything, and that they'll likely be back to their close-knit ways before long.