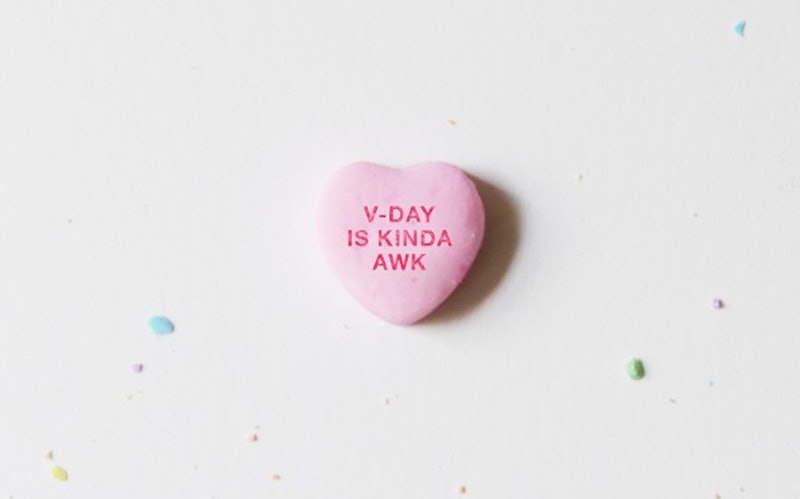 Contrary to what people seem to think, the worst thing to be on Valentine's Day is not single — it's being involved with someone in a way you don't know how to classify. But to help keep the romantically ambiguous from feeling left out, there's always these conversation hearts for people who haven't had the relationship talk yet from The Bold Italic. Unfortunately, they're not something you can actually buy for yourself; as a concept, though, they're pretty cool.

The thing about Valentine's Day is that people who are in relationships do something together, and people who are single either hang out together or hang out with their Netflix — or just blissfully forget about this holiday all together. But what about people who are neither single nor in a relationship? People who have a "friends with benefits" situation going on, say, or an "I don't like you as a person but we are still each other's hookup buddy" type scenario? Or what if you're in an open relationship? What do you do in situations like that?

There are just so many ways that human relationships can be ambiguous; Valentine's Day, however, operates under the assumption that people's lives must fit into the binary states of either "single" or "taken" — which ultimately just makes things that much more complicated. So for modern people whose love lives are not nearly so complicated as the world seems to expect, here are some conversation hearts for you, too. Here are a few of my favorites; head on over to The Bold Italic to see the rest. Don't feel left out.

You can check out more undefined relationship heart ideas at The Bold Italic here.