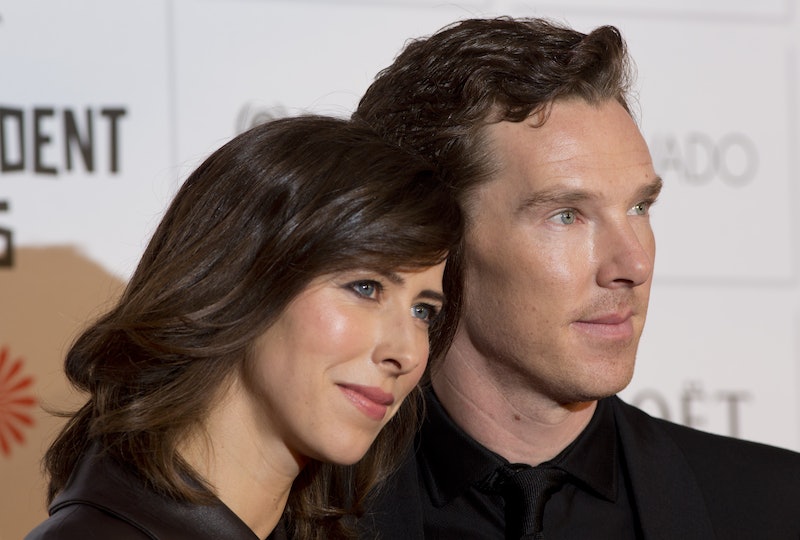 Unless you're a Benedict Cumberbatch fan who's been living under a rock that lacks sufficient Wi-Fi or LTE coverage, you probably know by now what the rumors are saying: According to sources like Us Weekly and The Daily Mail, Benedict Cumberbatch and Sophie Hunter may be set to marry Saturday in a surprise Valentine's day wedding ceremony on the Isle of Wight in England. I know, I know: Between this report and the fact that Drake dropped a new mixtape out of literally nowhere on Thursday night, I don't know how much more of this "surprise celebrity news" I can take before my head explodes (or something).

But hey, not the point — the point, of course, is Cumberbatch's maybe-impending nuptials to Sophie Hunter on Saturday! Of course, with rumors that the two may wed as early as literally right this second, the question on everyone's mind's moves from the who/what/when/where/why to the "how did this adorable couple's engagement first start out?" It's a pretty obvious question to ask, especially by a Cumberbatch fan who knows how sweet and romantic he can be. Unfortunately for fans, the answer is not quite so simple — but hey, neither is love, right?

So, how did Benedict Cumberbatch propose to Sophie Hunter? Short answer: We don't actually know. (Look, I warned you, the answer is "not quite so simple"!) Longer answer: Apparently, Cumberbatch is so damn romantic and old-fashioned that he wants to keep the specifics of the proposal between him and his lovely bride-to-be Hunter, and away from the blogosphere — which, you know, makes total sense and is enough to make anyone, myself included, swoon over him even moreso than before.

Cumberbatch specified his wishes during an interview on Good Morning America whilst he was promoting his Oscar-nominated film The Imitation Game: When asked by an anchor, "Did you propose the old-fashioned way too?" Cumberbatch had this to say:

Sort of, but that’s for me to know and no one else to find out.

I mean, I get it — Cumberbatch is a private guy, and something like a proposal is a very intimate thing that he should totally be allowed to keep to himself. For what it's worth, there were rumors running in publications like The IB Times in October 2014, prior to Cumberbatch's engagement, stating that he may have asked Hunter's mother, Anna, for permission to propose to Hunter —which would technically fall under the veil of "old-fashioned."

However, speculating more than that when Cumberbatch clearly doesn't want the world to know would be considered a bit of a violation of privacy — so, instead, I'm just going to go with wishing the couple congratulations if Saturday is in fact the big day of the wedding, and await patiently hunched over my laptop for the first sign of photos from this sure-to-be magical wedding. (I mean, it's said to be taking place at a "spectacular period property" in South-East England, and it's Benedict Cumberbatch. How could it not be magical?)